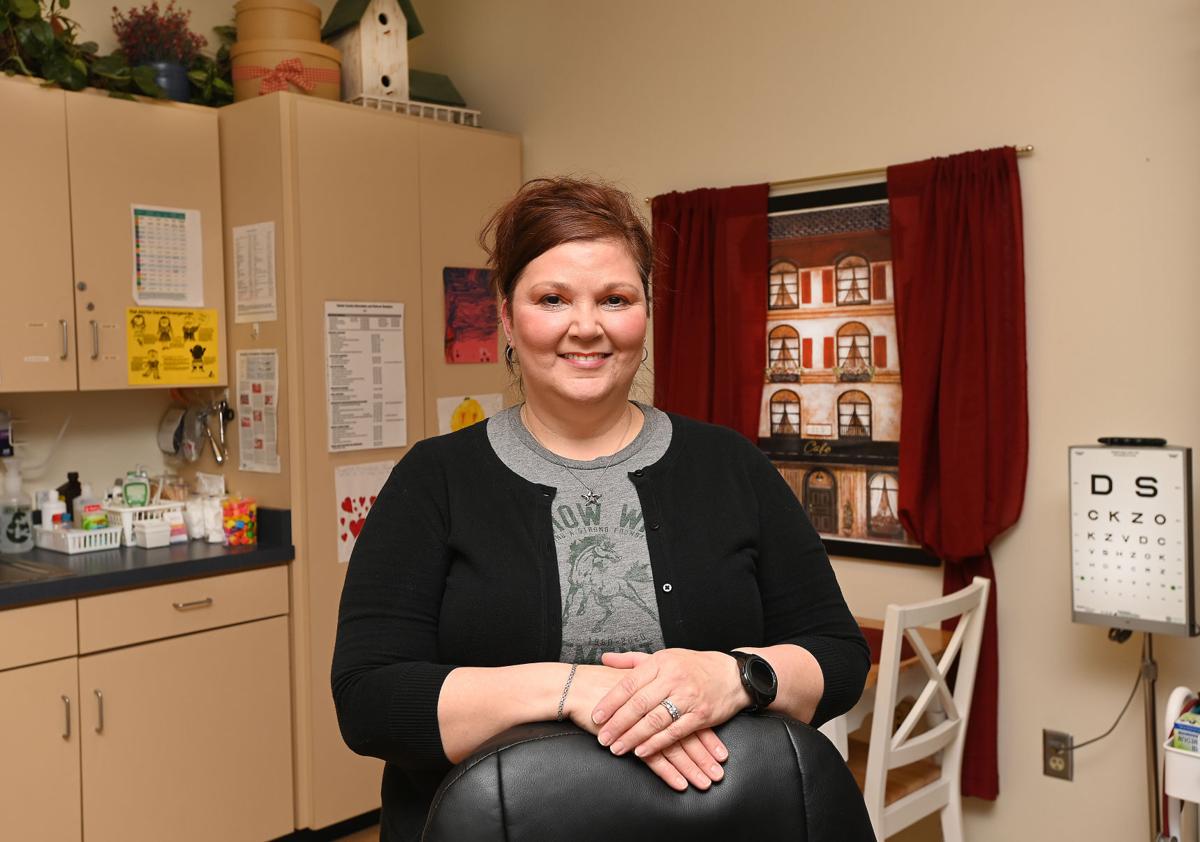 Woodrow Wilson Elementary School nurse Lesa Mash is seen in her office on Friday at the northeast Denton campus. Amid the pandemic, Mash and other nurses have had an increase in direct contact with students’ families. 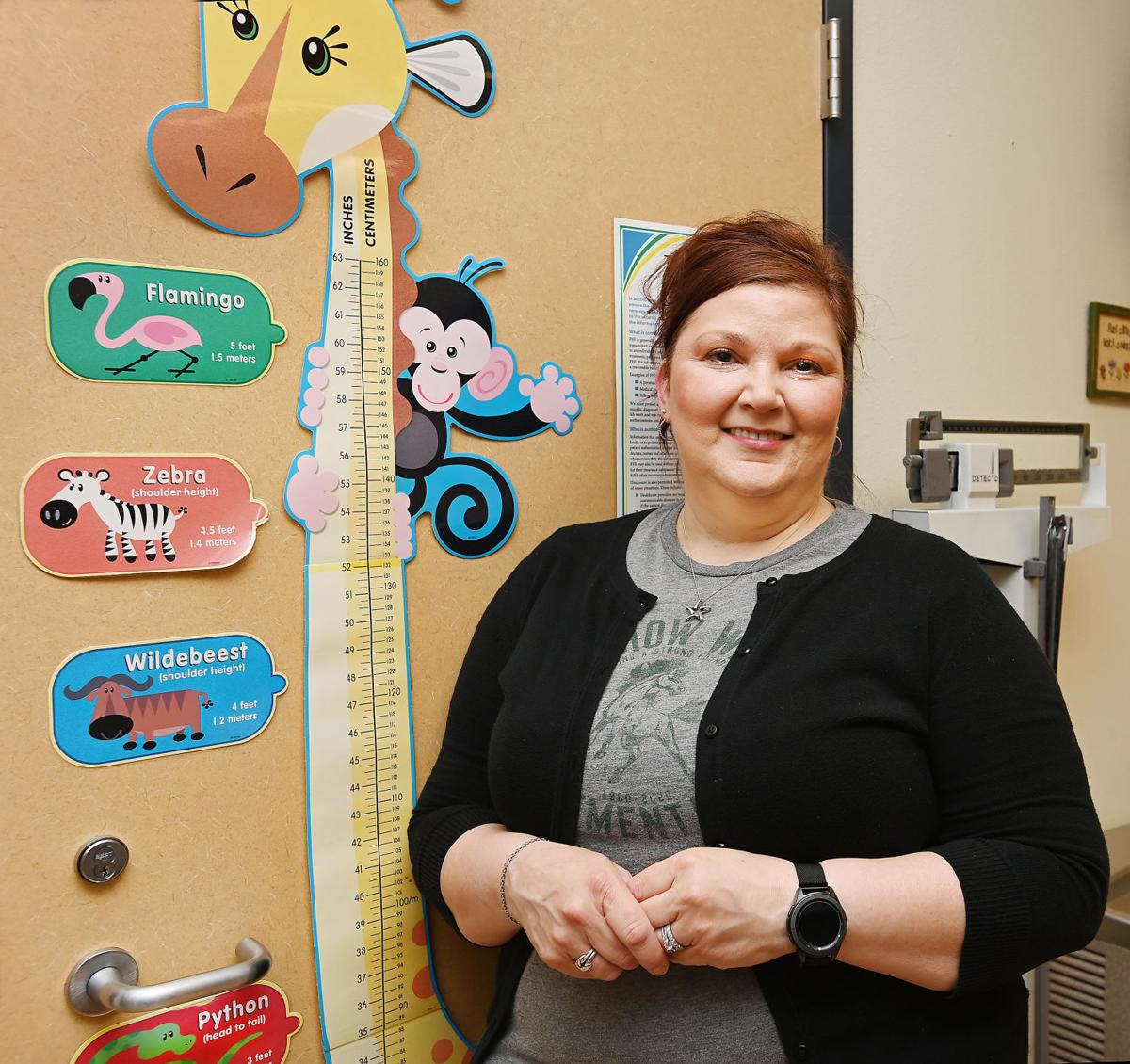 Woodrow Wilson school nurse Lesa Mash is seen in her office on Friday at the elementary school in northeast Denton.

Woodrow Wilson Elementary School nurse Lesa Mash is seen in her office on Friday at the northeast Denton campus. Amid the pandemic, Mash and other nurses have had an increase in direct contact with students’ families.

Woodrow Wilson school nurse Lesa Mash is seen in her office on Friday at the elementary school in northeast Denton.

March 2020 turned Laura McFerren’s life upside down and kicked off a year she could best describe as “surreal.”

She is among the dozens of local school nurses tasked with crafting and implementing many of the day-to-day pandemic safety measures now commonplace.

McFerren is a nurse at Sanger’s Butterfield Elementary where she is also the district’s coordinator for health services. That means she had plenty on her plate before the pandemic came along more than a year ago.

“I think that we realized when this hit just how flexible school nursing is,” she said Friday.

She, like many others in the industry, spent years working in hospitals and other nursing jobs before heading to work in schools.

She was among the first employees when Butterfield opened in 2008, she said, and she spent nearly 8 years in nearby Pilot Point ISD before that.

Prior to that, she was nurse for roughly 8 1/2 years at Denton Community Hospital, which is now Texas Health Presbyterian Hospital Denton. She worked in progressive care, intensive care units, surgery and several other areas before she felt comfortable working as a school nurse.

Contrary to the prevailing opinion that school nursing “isn’t quote-unquote ‘real nursing,’” McFerren said, the job has a high level of independence and thus requires a diverse and in-depth skillset.

“Like me, a lot of nurses feel they need that experience to just troubleshoot some of the things that come your way when you get into a setting like this,” she said.

Several local school nurses said their jobs hadn’t changed much over the past year. For instance, their clinics were already engaged in many of the heightened hygiene protocols the pandemic required for most public spaces.

Instead, they said the pandemic amplified their existing work, which brought them into more direct communication with district parents.

Their treatment varied drastically depending upon what district and campus they worked at.

For instance, Argyle High nurse Sherrie Thompson, speaking during the March 15 board meeting, reported being yelled at, cursed at, called a liar and accused of various things by angry parents over the past year.

“I do not lie,” Thompson said during the meeting. “I do not make up names. I don’t know the names of all 1,300 kids. I don’t hardly get out of my office because I’m answering emails; being yelled at, hollered at, being accused of this, that and the other on the phones.”

In neighboring Denton ISD, two nurses reported no such harassment.

Both Lesa Mash and Shirl Wills, nurses at Wilson Elementary and Guyer High respectively, said their interactions with parents were overwhelmingly positive this past year.

“This year has been extremely exciting for that because I’ve gotten to work with and get to know parents more so than before,” Mash said.

Wills said the pandemic’s early days saw longer work days, but that faded as procedures were put into place. What has remained are the frequent communications with families and faculty to update them on how the campus is doing.

Back in Sanger, McFerren agreed the majority of parents are grateful for the help she and others nurses could provide.

“There has been a wide variety of responses from families, and, you know, everyone has a different stance on [the pandemic], it seems,” she said.

Sometimes that meant families were upset and disagreed with the district’s approach to keeping students safe. Fortunately, she said, most of that anger was directed at county, state and federal agencies whose guidelines school districts followed instead of the districts themselves.

One of the most prominent pandemic measures came in the form of contact tracing, which school nurses were at the heart of.

Mash and Wills said DISD nurses were responsible for contact tracing when infected students or staffers had been on campus, but principals and other campus leaders were charged with communicating findings with families.

Those efforts were responsible for many interactions between nurses and families, leading some parents to admit they didn’t realize the extent of what school nursing entails.

For now, each of the nurses is looking hopefully toward shrinking coronavirus infection numbers as we draw closer to the school year’s end. If things continue at this rate, they might have a normal school year come fall.

McFerren said nursing in general, and school nursing in particular, isn’t typically seen fully for what it is: “We work behind the scenes, and this year has kind of pulled our voices up into the forefront as we’ve just kind of seen the reality of COVID hit.”

"We work behind the scenes, and this year has kind of pulled our voices up into the forefront as we’ve just kind of seen the reality of COVID hit."