CORRECTION: A previous version of this story incorrectly named a previous provider of video visitation services for the Denton County Jail.

The Texas Commission on Jail Standards has suspended in-person visitation for county jails, and some Denton-area law enforcement agencies are limiting face-to-face interaction with residents as a precaution against COVID-19.

The Centers for Disease Control and Prevention has stated that social distancing can prevent community spread of the new coronavirus, which has infected five people in Denton County and killed three Texans as of Wednesday afternoon, according to state and county officials.

After Gov. Greg Abbott’s emergency declaration Friday, the Texas Commission on Jail Standards announced that visitations would be suspended until further notice.

“Last Friday after Gov. Abbott declared a state of emergency, we were able to request and have approved suspension requiring visitation, and we are in contact with the counties providing them additional guidance in how to operate their facilities,” said Brandon Wood, executive director for TCJS.

Wood said jails would use video for visitation if they’re able to, allowing in-person visits only if they are absolutely necessary.

The Denton County Sheriff’s Office hadn’t responded to multiple requests for comment by Wednesday evening regarding visitation policies for the county jail or juvenile detention center.

Denton County Jail only allows video visitation for its inmates on-site and via a website.

The Denton County Juvenile Detention Center is for short-term holding, and the county’s website mentions only family contact through phone calls.

In late February, the state commission provided procedures and guidelines for screening visitors. On Friday, the suspension of visitation went into effect and will remain until Abbott terminates the suspension or until the disaster declaration is lifted, according to a memo sent to county jails.

The Texas Department of Criminal Justice announced Friday that it also would be suspending visitation and wouldn’t allow volunteers at any of its facilities. The department oversees more than 100 prison facilities in the state.

“We are taking precautions for our officers. … It’s very difficult for us because we can’t always practice the social distancing method because we have to take care of citizens,” Kreidler said. “We just want our citizens to know that if they call 911, we will absolutely respond. We are here. We’re not closing up business.”

The Denton Police Department announced Sunday that it would try to limit how often officers come face to face with residents.

If residents know their call isn’t an emergency, the department encourages them to call 940-349-8173 to make a report and provide residents with additional resources. The department’s front lobby on East Hickory Street will be closed until further notice.

The department will continue to dispatch officers to call types such as sexual assaults, family/domestic disturbances, disturbances involving violence or threats of violence, thefts, burglaries, robberies and vehicle crashes with injuries or road blockages. 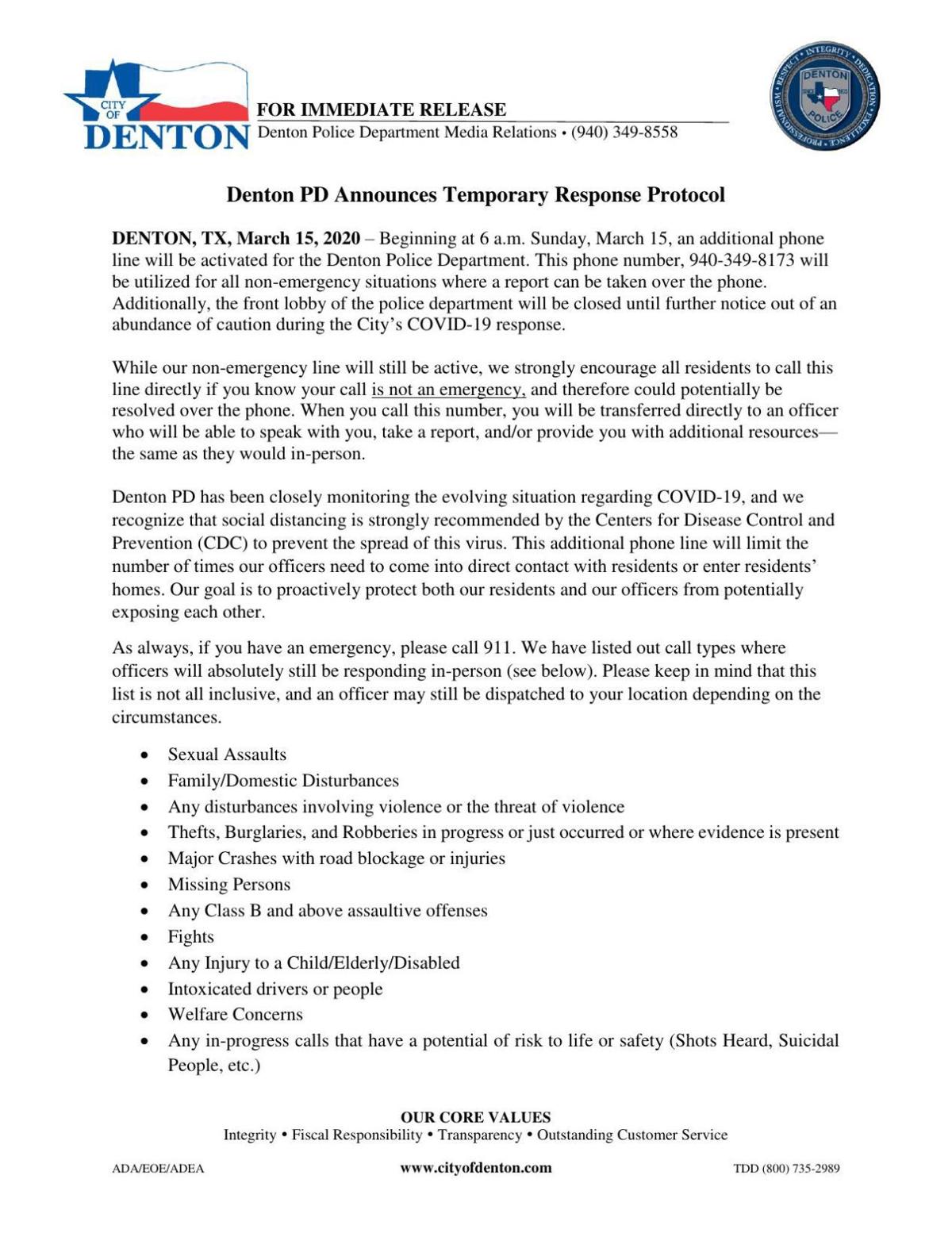 The news release states that the call types the department has listed are not inclusive and officers will be sent out to locations depending on the circumstances.

The Argyle Police Department will respond similarly to the Denton Police Department. In a statement, the department encouraged residents to avoid making in-person visits to its lobby. Officers will take information through the glass partition and won’t come into close contact with residents if they choose to visit the lobby.