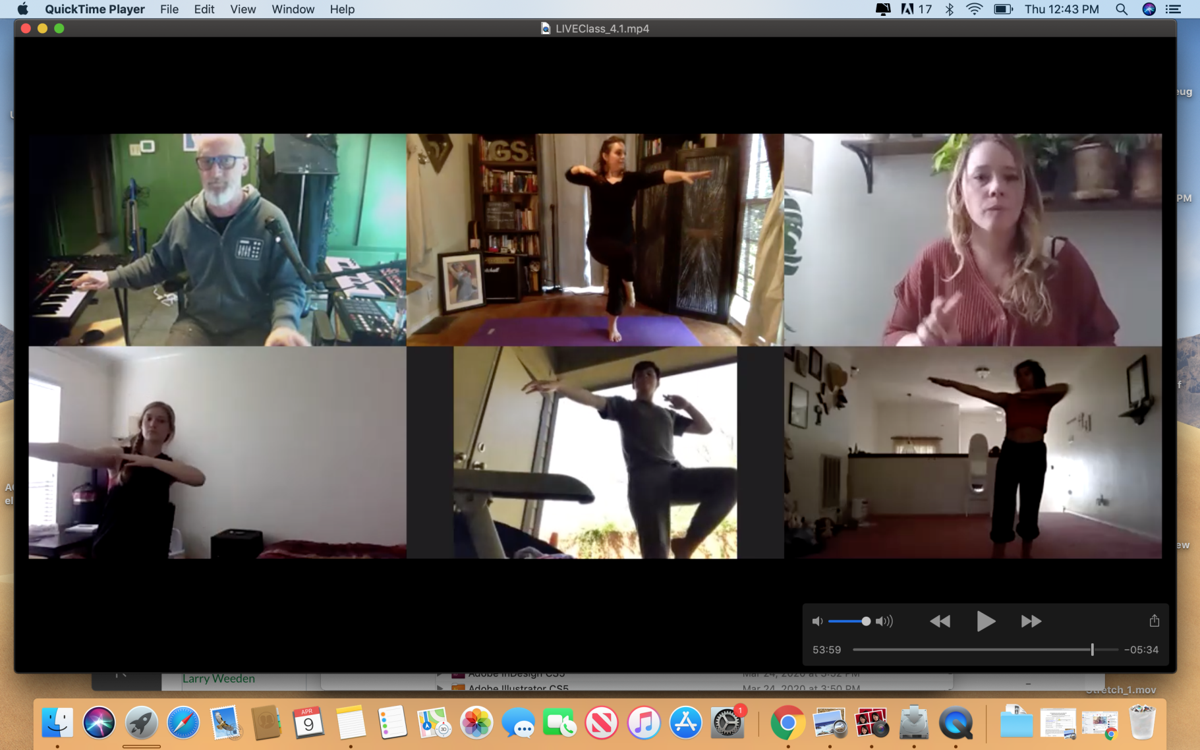 University of North Texas students Kylie Belville, Emerson Braun and Victoria Escalente work on some moves in a recent Zoom session with music accompanist Paul Slavens and interpreter Elizabeth Roseberry. Dance, music and theater students and professors have had to develop unique online strategies to cope with limitations due to the COVID-19 pandemic. 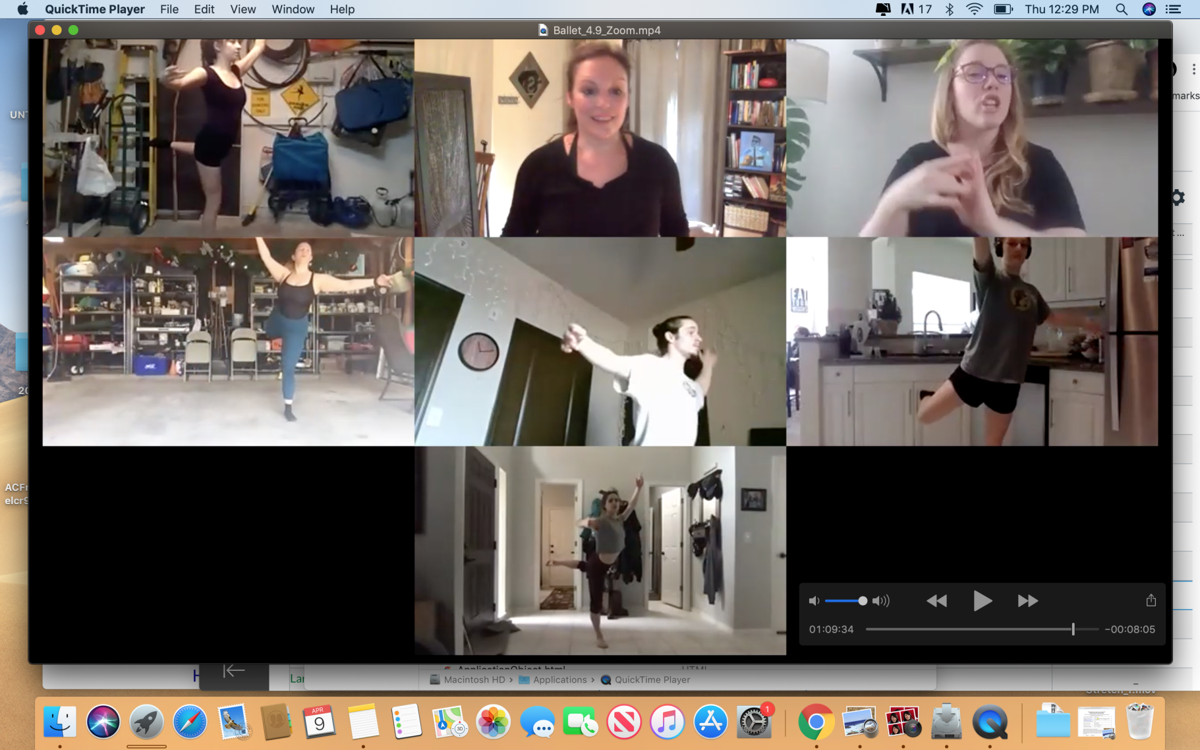 University of North Texas students Kylie Belville, Emerson Braun and Victoria Escalente work on some moves in a recent Zoom session with music accompanist Paul Slavens and interpreter Elizabeth Roseberry. Dance, music and theater students and professors have had to develop unique online strategies to cope with limitations due to the COVID-19 pandemic.

As all university classes have been forced online due to COVID-19, dance, music and theater departments’ students and professors have gone through significant changes in the way they learn and teach.

While some classes at the University of North Texas and Texas Woman’s University have shifted easily to the internet, others have gone through a more complex transition.

TWU dance senior Greyson von Trapp said the instructors for his dance technique classes now upload videos of themselves demonstrating a phrase — a short piece of choreography — for the class to view. Students must learn the phrase and then upload a video of themselves performing it.

A small spare bedroom in his apartment is now his dance space.

“I think the biggest issue is mostly just space constraints, because so many people don’t have proper dance studio space,” von Trapp said. “There are just certain things that you can’t really fulfill within your space constraints. Also, with a camera filming you, since we don’t have wide-angle cameras to film the whole space, you kind of have to dance in your frame.”

UNT dance professor Mary Lynn Babcock said she worked with her colleagues to develop online teaching strategies. She said she has used the “breakout room” feature on videoconferencing platform Zoom to divide students into small groups and give them more individual attention.

“I am really blown away by how people are pulling together,” Babcock said. “I think the thing about transferring instruction online is that we have to make sure that there is direct interface with the students. And then, we also have to make sure that we give them assignments that they can work on independently.”

Musicians also have noticed major changes. Linda Jenkins is a flutist pursuing a graduate artist certificate at UNT. Instead of traditional classes, most of her time is typically dedicated to recitals, playing in ensembles and giving private lessons to children in local public school districts.

“So essentially, I don’t do anything anymore,” Jenkins said.

Jenkins said she was meant to perform in the Central Ohio Flute Association’s Young Artists Competition. She also planned to attend the National Flute Association convention, which was going to take place in Dallas this year. Both events were canceled.

“I prepared for these competitions, and they’re not happening,” Jenkins said. “That’s more upsetting because those take way more planning, and it’s a little more personal than most of the stuff that ... I do with school.”

The cancellation of events and performances has been a trend throughout the performing arts. TWU’s two dance showcases, a more intimate show called Dance UpClose and a larger show called DanceMakers, were canceled. Additionally, theater productions at UNT have either been postponed, canceled or still have an uncertain future.

“[For] the first week or so that we were shut down, I just laid in my bed,” Anderson-Carrasco said. “I [had] no idea what I [was] supposed to do. Sure, I can pass my classes now. I’ll get maybe an A because the teachers feel bad. But at the end of the day, I don’t care about the end point; I care about the journey of getting there.”

For von Trapp, this journey also includes the importance of audience interaction while performing.

“A lot of validation and a lot of reaffirmation as a performer and as an artist is external,” von Trapp said. “You get that energy exchange between you and the audience.”

Babcock said this experience has made students more flexible in how they learn. However, she said dance is a “visceral” art form, so it is difficult to perform online.

“I’m hoping that we’ll be back in the studio space in the fall because dancers, actors and performers need that live space to do what it is that they do,” Babcock said. “And that’s perform.”

Anderson-Carrasco also said that he is looking forward to the future.

“You’re going to see a lot of weird theater people come out in four or five months,” he said. “All I can say is it’s going to be a party whenever, and however, everything gets to a safe point.”

CAMILA GONZALEZ can be reached via Twitter at @camila_approves.