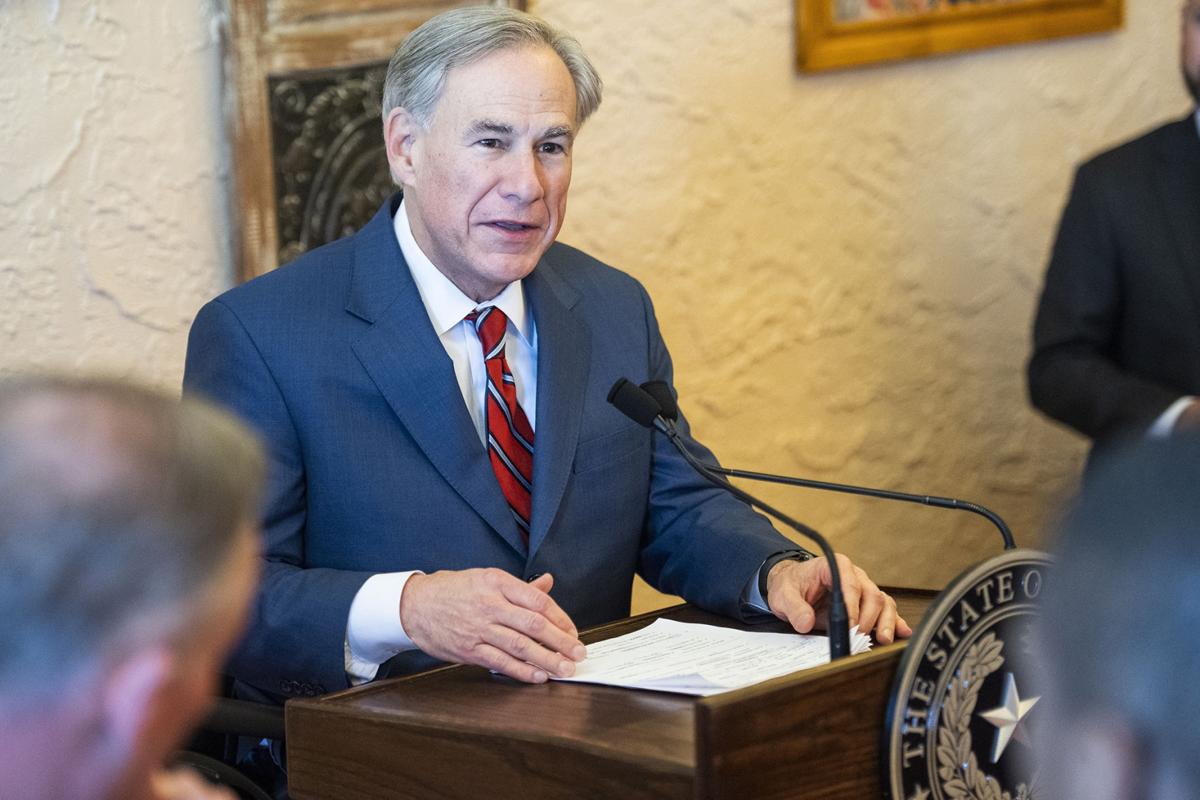 On March 2, Texas Gov. Greg Abbott announced the rescinding of executive orders that limit capacities for businesses and the statewide mask mandate. 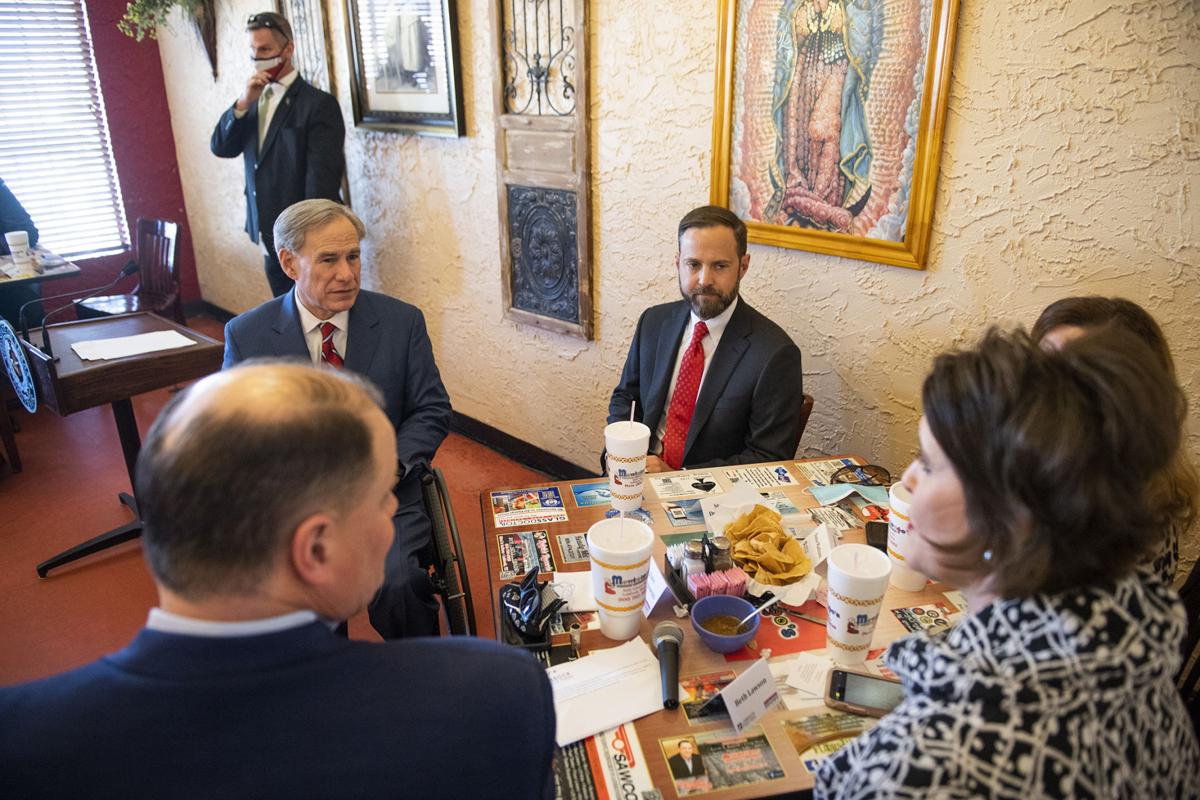 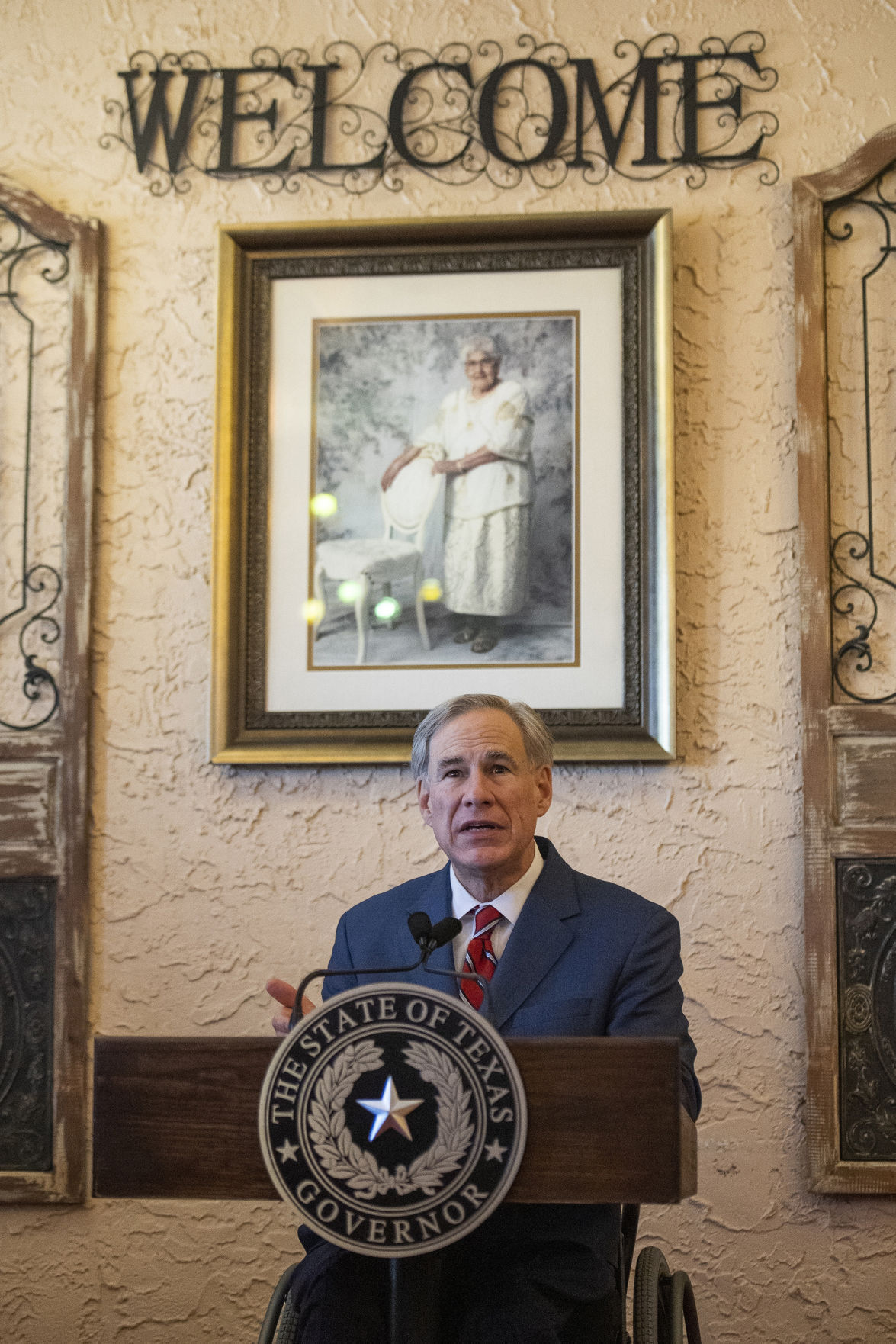 Gov. Greg Abbott delivers an announcement in Montelongo's Mexican Restaurant on Tuesday in Lubbock. Abbott announced that he is rescinding executive orders that limit capacities for businesses and the state wide mask mandate.

Gov. Greg Abbott announced Tuesday that he will end Texas’ statewide mask mandate next week and will allow all businesses to operate at full capacity.

“It is now time to open Texas 100%,” Abbott said from a Mexican restaurant in Lubbock, arguing that Texas has fought the coronavirus pandemic to the point that “people and businesses don’t need the state telling them how to operate” any longer.

Abbott said he was rescinding “most of the earlier executive orders” he has issued over the past year to stem the spread of the virus. He said starting March 10, “all businesses of any type are allowed to open 100%.” A spokesperson later confirmed that includes sporting events, concerts and similar events. Masks will no longer be required in public for the first time since last summer.

Meanwhile, the spread of the virus remains substantial across the state, with Texas averaging over 200 reported deaths a day over the last week. And while Abbott has voiced optimism that vaccinations will accelerate soon, less than 7% of Texans had been fully vaccinated as of this weekend.

Texans and Americans of color have been disproportionately affected by the pandemic. More than half of the deaths due to COVID-19 have been Black or Hispanic people, and advocates have reported that these communities have fallen behind in the vaccination efforts in Texas.

Texas will become the most populous state in the country not to have a mask mandate. More than 30 states currently have one in place.

Currently, most businesses are permitted to operate at 75% capacity unless their region is seeing a jump in COVID-19 hospitalizations. While he was allowing businesses to fully reopen, Abbott said that people still have the right to operate how they want and can “limit capacity or implement additional safety protocols.” Abbott’s executive order said there was nothing stopping businesses from requiring employees or customers to wear masks.

But soon after the announcement, the grocery chain H-E-B indicated in a statement that it won’t require customers to wear masks.

Acknowledging that some local leaders remain concerned about the spread of the virus in their communities, Abbott laid out a strategy that allows them to take matters into their own hands under certain circumstances. If COVID-19 hospitalizations in any of Texas’ 22 hospital regions rise above 15% of the capacity in that region for seven straight days, a county judge “may use COVID mitigation strategies in their county,” according to the governor.

However, Abbott specified that “under no circumstance” can a county judge jail someone for not following their orders. They also cannot impose penalties on people for failing to wear masks — or on businesses for not mandating that customers or employees wear masks. And if local restrictions are triggered, businesses still must be allowed to operate at 50% capacity at the minimum.

Texas public schools will be allowed to continue offering virtual learning under the new order, and some superintendents have said that they will continue to require masks unless they receive word that they can’t. Abbott’s executive order says schools must follow “guidance issued by the Texas Education Agency.” The TEA said Tuesday afternoon that it will provide updated guidance this week.

The order also lifts a previous mandate that halted inmate visitation at county and municipal jails, though it was not immediately clear how that would affect individual jails. The new order specifically kept in place, however, a controversial order to restrict who can be released from jail without paying cash bail during the pandemic.

Abbott’s announcement prompted outcry from local leaders in Texas’ biggest cities. The head of Texas’ most populous county, Harris County Judge Lina Hidalgo, responded to Abbott’s moves by saying “now is not the time to reverse the gains we’ve worked so hard to achieve.”

Other Democrats swiftly denounced Abbott’s announcement, with the state party chairman, Gilberto Hinojosa, calling his actions “extraordinarily dangerous” and saying they “will kill Texans.” Beto O’Rourke, a potential Abbott challenger in 2022, used similar rhetoric, calling Abbott’s moves a “death warrant for Texans” and claiming the governor is “killing the people of Texas.”

Abbott’s critics also noted the announcement was coming in the wake of the winter weather crisis that left millions of Texans in the cold and the dark, exposing deep flaws in Texas’ electrical grid under GOP leaders including Abbott.

“Unfortunately, Gov. [Abbott] is desperate to distract from his recent failures during the winter storm and is trying to change the subject,” state Rep. Chris Turner of Grand Prairie, chair of the House Democratic Caucus, said in a statement.

In a radio interview after his announcement, Abbott said he had wanted to move even faster to fully reopen businesses and lift the mask mandate. He told Lubbock host Chad Hasty that he wanted to make the announcement over a week ago — the last Monday in February — but held off to allow the vaccination distribution process to get “back up and running at full speed” following the storm.

It is not just Democrats who have been critical of Abbott’s pandemic management. He has also faced criticism from some in his own party who say he has been too slow to reopen Texas, especially compared to other GOP-led states. Allen West, the Texas GOP chairman who has been critical of some of Abbott’s pandemic handling, reacted to the governor’s announcement by saying he was “glad Gov. Abbott is following the example of” Florida Gov. Ron DeSantis and South Dakota Gov. Kristi Noem. Both DeSantis and Noem are widely seen as potential 2024 presidential candidates; Abbott has not ruled out a White House bid of his own.

In Lubbock, Abbott defended his reopening decision by saying Texas is “far better positioned now” than when he issued his last executive order on the pandemic in October. That order set up a system under which business reopenings would automatically roll back in a hospital region if its COVID-19 patients went over 15% of capacity for seven consecutive days.

Abbott further argued that the state is in a “completely different position” than it was in when the pandemic first prompted him to take statewide action nearly a year ago. He said the state now has an “abundance” of personal protective equipment, the ability to do over 100,000 tests a day, medicines to treat coronavirus patients and wide awareness of protocols such as social distancing and hand-washing. Most importantly, he said, vaccines are available and the supply “will continue to increase rapidly,” with Texas preparing to expand the categories of people eligible to get vaccinated. Abbott told Hasty that “announcements will be made this week” about opening up the categories.

Despite Abbott’s optimism, only 6.5% of Texans had been fully vaccinated as of Sunday, and more broadly, the current trajectory of the virus has been difficult to measure in recent days due to last month’s winter storm, which forced many large counties to close their testing centers and not report any cases. Daily confirmed cases and deaths are clearly down compared to a statewide peak in January. Hospitalization data has been less disrupted, though, and has shown a consistent decline since late January.

When it comes to vaccinations, experts say Texas is a long way from reaching herd immunity. Hitting the 70% to 80% level that many estimate is needed would mean vaccinating some 22 million people, or nearly 100% of adults in the state, according to census numbers. The vaccines are currently not approved for children under 16, who make up about 23% of the population. More than 40,000 people have died from the virus in Texas since the pandemic began.

Scientists do not yet know for sure whether or how well the vaccines prevent the spread of the virus, though some preliminary research has suggested that some vaccines might be able to do so to some extent.

The Centers for Disease Control recommends that people who have received two doses of the vaccine continue to avoid crowds, stay at least 6 feet away from people who live outside their households and wear masks to cover their nose and mouth.

Dr. Anthony Fauci, the nation’s top infectious-disease doctor, has repeatedly said that he does not know when Americans will be able to return to normal, but that they may still need to continue wearing face masks into 2022.

Texans have been under a statewide mask mandate since July of last year — and they have grown widely comfortable with it, according to polling. The latest survey from the University of Texas and Texas Tribune found that 88% of the state’s voters wear masks when they’re in close contact with people outside of their households. That group includes 98% of Democrats and 81% of Republicans.

The absence of statewide restrictions should not be a signal to Texans to stop wearing masks, social distancing, washing their hands or doing other things to keep the virus from spreading, said Dr. John Carlo, CEO of Prism Health North Texas and a member of the Texas Medical Association’s COVID-19 task force.

Carlo declined to react specifically to Abbott’s order, saying he had not had a chance to read it. He also expressed concern that new virus variants, specifically the U.K. variant, could still turn back the positive trends cited by Abbott.

“We’re facing unacceptably high rates, and we still hear every day about more and more people becoming sick. And it may be less than before, but it’s still too many,” Carlo said. “Even if businesses open up and even if we loosen restrictions, that does not mean we should stop what we’re doing because we’re not there yet.”

Abbott’s announcement Tuesday was not entirely surprising. He said Thursday that his office was looking at when it could lift all statewide coronavirus orders and that he would have announcements “pretty soon.”

Prior to the announcement, Hidalgo and Houston Mayor Sylvester Turner sent a letter to Abbott asking him to keep the mask requirement in place. Austin Mayor Steve Adler and Travis County Judge Andy Brown separately sent the same letter.

“We believe it would be premature and harmful to do anything to lose widespread adoption of this preventive measure. Scientific studies have shown repeatedly that the widespread wearing of face masks slows down the virus,” the letter reads. “Especially with the arrival of new variants of the virus to Texas and our cities, with the associated spike in cases, preserving the most effective of our existing safety measures is even more important.”

In Hidalgo County, where the hospitalization number has dropped from around 500 to under 200 in the last month, the eased restrictions could threaten the progress that has been made, said Dr. Ivan Melendez, Hidalgo County health authority and a local physician. The Rio Grande Valley community, which at one point was one of the nation’s hot spots, still has some of the highest rates of risk indicators in the country, Melendez said.

“All of a sudden, instead of having a scenario that facilitates what we’re trying to do, we have another scenario that causes us to have greater difficulty in our goal, which is to eradicate this disease,” Melendez said. “Although I believe the governor is well intended and I understand he has a lot more criteria that he has to filter through, I believe that this should have been the last step, not the first. … It’s too much, too soon.”