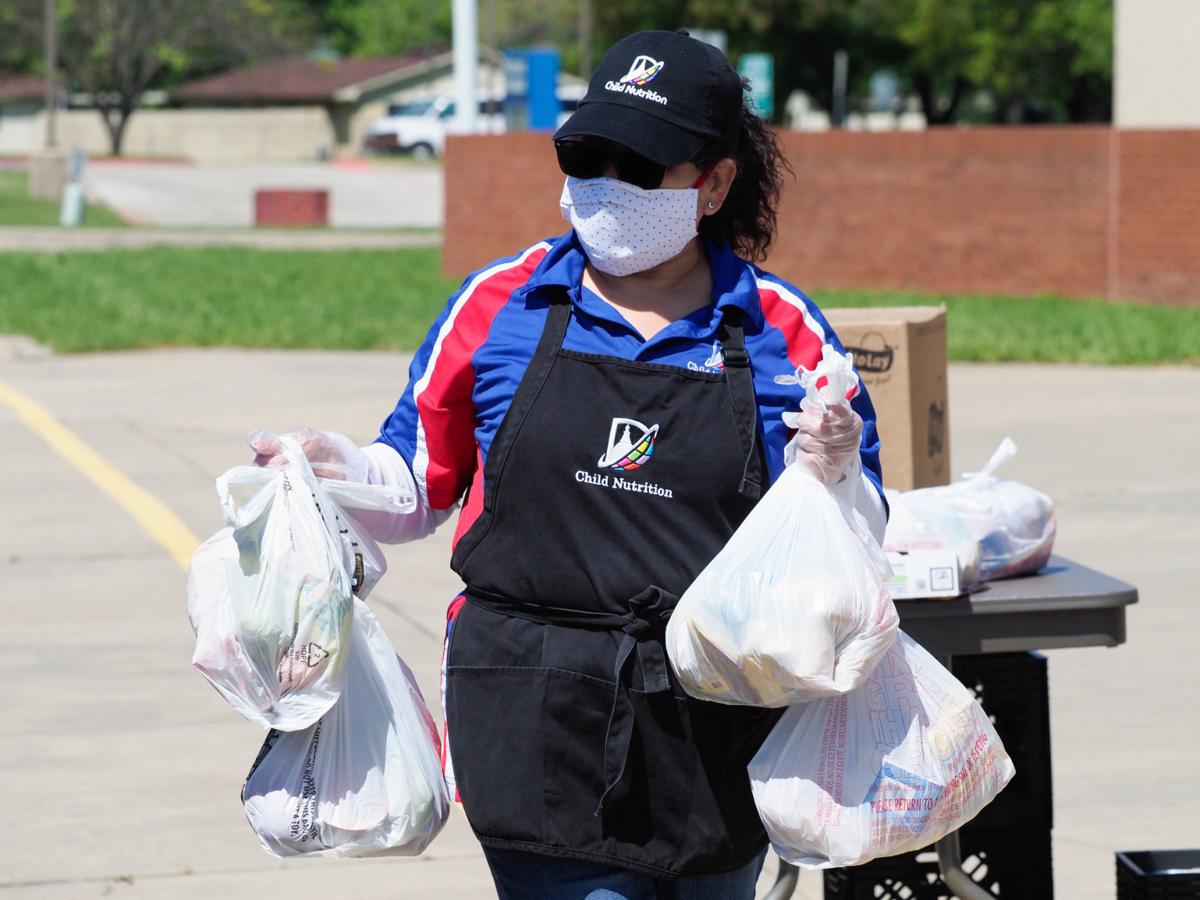 Child nutrition worker Ana Sanchez places meal bags in the back of a family’s vehicle at Rivera Elementary School on Wednesday. Denton ISD is handing out a week’s worth of lunches and breakfasts for children on Wednesdays from 11 a.m. to 1 p.m. at 18 locations. 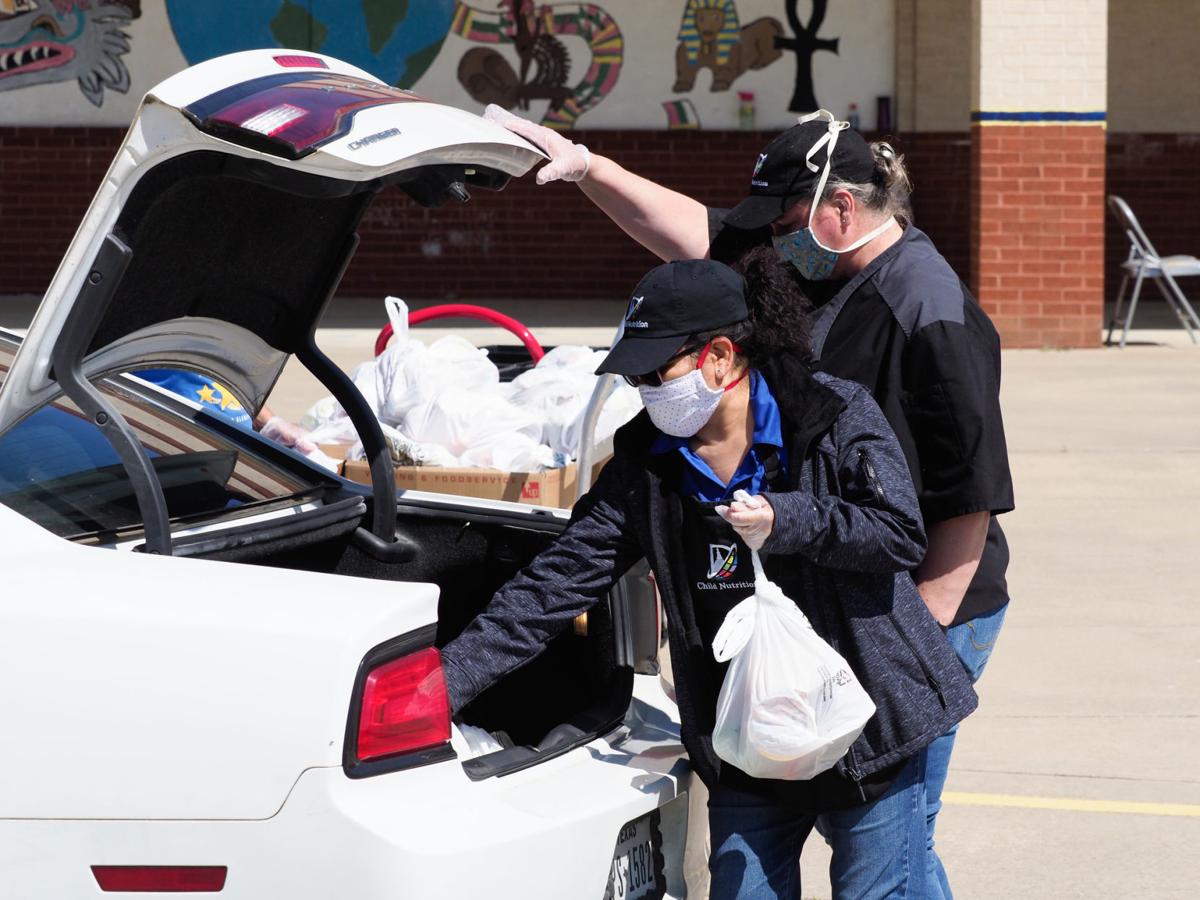 Child nutrition worker Ana Sanchez places meal bags in the back of a family’s vehicle at Rivera Elementary School on Wednesday. Denton ISD is handing out a week’s worth of lunches and breakfasts for children on Wednesdays from 11 a.m. to 1 p.m. at 18 locations.

Many of the threads holding up Denton ISD’s meal distribution program were brought up during Tuesday’s school board meeting.

Speakers covered a lot of ground during the presentation. Below are five of the more important aspects that haven’t been as widely discussed:

Five days of food every Wednesday

Workers and volunteers had worked for weeks to hand out meals for students Monday-Friday, but district officials felt the daily model was bringing people into close contact too often.

Between 11 a.m. and 1 p.m. every Wednesday, parents can now drive by one of the district’s 18 locations to pick up five days’ worth of breakfasts and lunches for their children under 18. Workers will put the food directly into drivers’ car trunks to further minimize contact.

Kids don’t have to be in the car with the driver, nor do kids have to be enrolled in the district to be eligible to receive the food. The program is mostly funded through a federal program in much the same way schools can provide meals when schools are closed over the summer.

That phrase was a common refrain during Tuesday’s presentation.

Chris Bomberger, executive director of child nutrition, said he and others in the district had first sought to provide the most good for families before they considered the regulatory hurdles in their way.

Regardless, some of the obstacles have since been removed by either the state or federal departments of agriculture.

Before the waivers began rolling in in mid-March, schools weren’t able to serve meals past 2 p.m., serve food outside of a cafeteria, bundle multiple meals or have a parent pick up food without a child present, among other regulations.

Mark Loeffler, a spokesman for the Texas Department of Agriculture, said the department has responded to school closures across the state in much the same way it had dealt with regional closures in the past.

“To be perfectly honest, some of it is unprecedented, and some of it isn’t,” he said of the state department’s response. 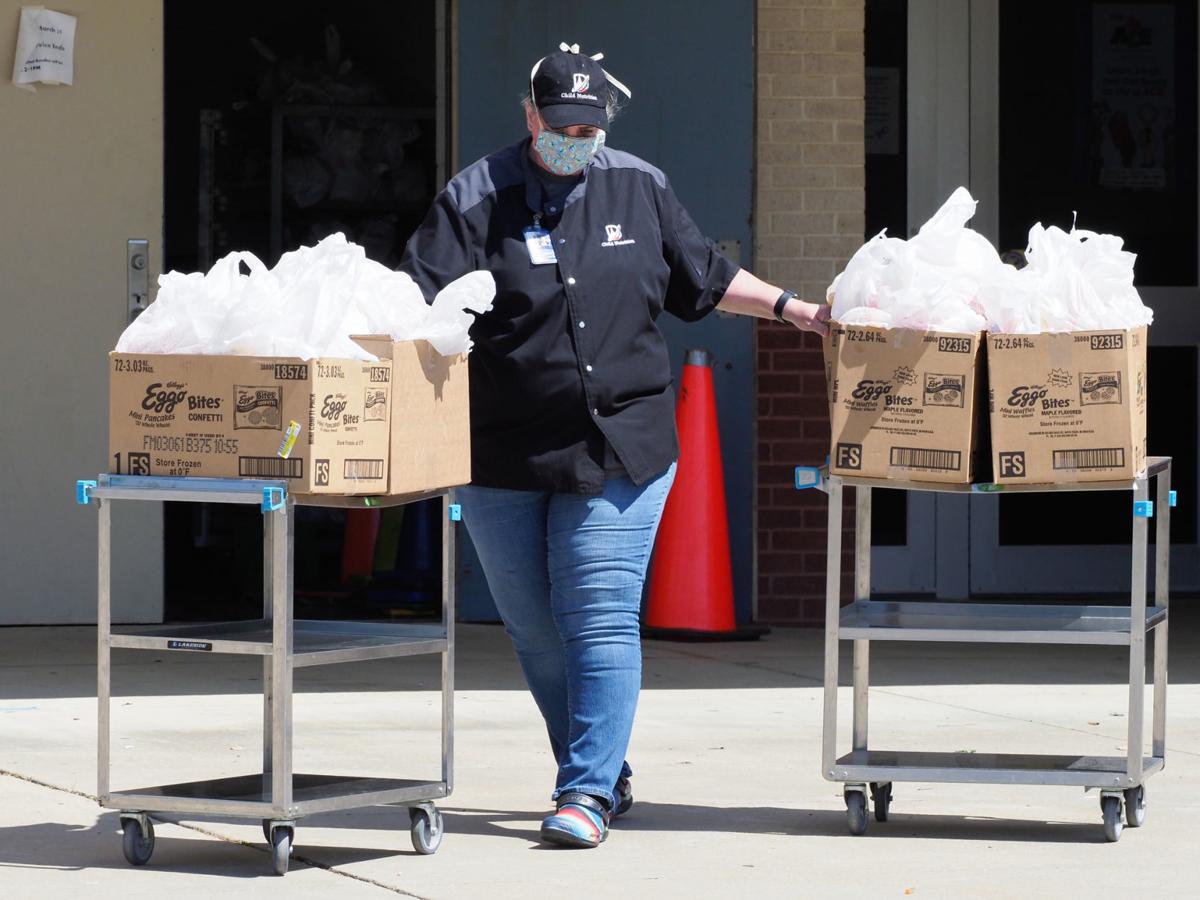 Child nutrition worker Mary Campbell brings out carts of meal bags for other workers to load into families' vehicles Wednesday at Rivera Elementary School. Denton ISD will start handing out a week's worth of food on Wednesdays at 18 campuses. 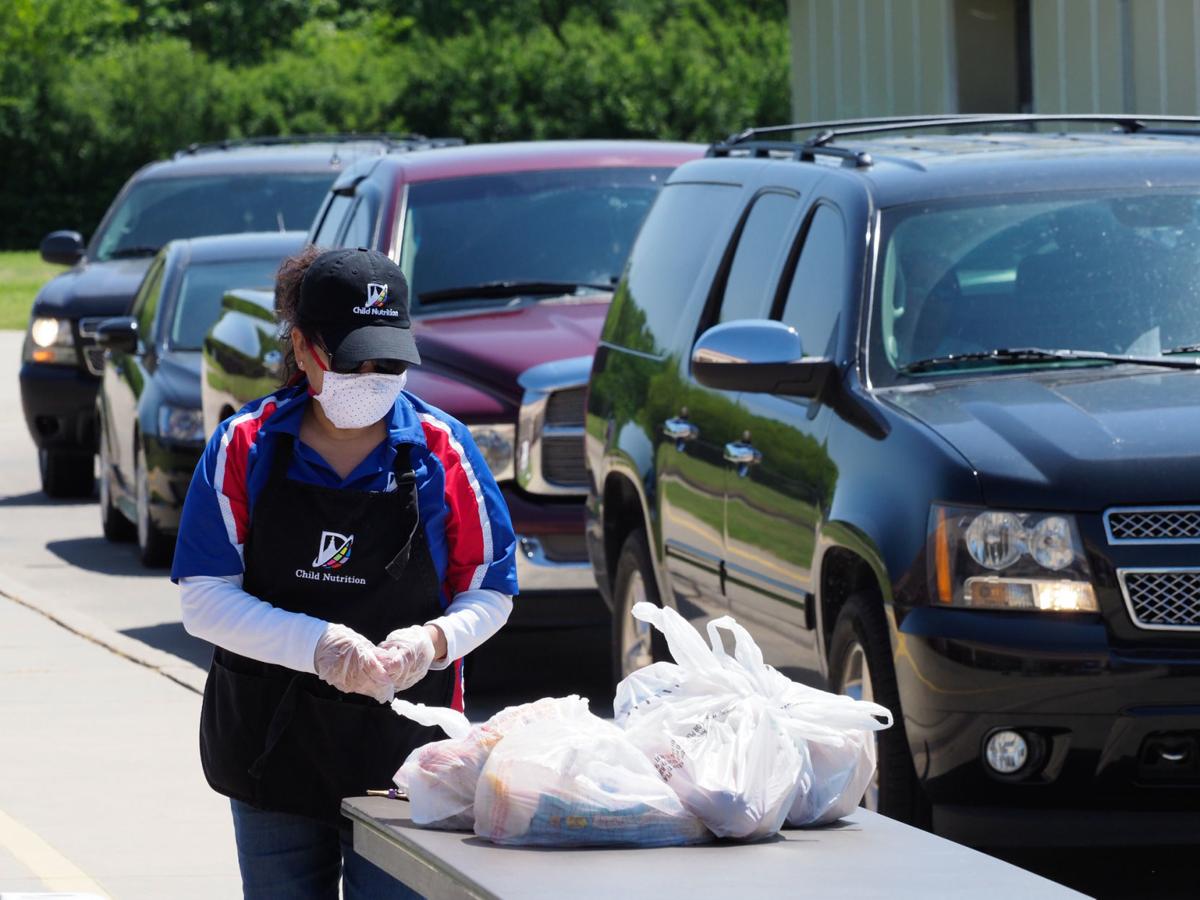 Child nutrition worker Mary Campbell brings out carts of meal bags for other workers to load into families' vehicles Wednesday at Rivera Elementary School. Denton ISD will start handing out a week's worth of food on Wednesdays at 18 campuses.

Food where you can find it

Understandably, school districts have had some trouble getting to their regular supplies of food.

Bomberger told those listening Tuesday that Denton ISD was able to get large amounts of food that might have otherwise spoiled on shelves at Sysco, a Lewisville-based distributor.

With some districts on spring break and others not making their usual orders, Denton ISD was able to take 140 cases of yogurt, more than 200 cases of chocolate milk and more off the company’s hands.

Additionally, Denton ISD picked up avocados, tomatoes, onions and dropped them into lunch bags. In the right hands, he said, some families could probably make some great salsa with the materials the district was able to find.

Funding from a friend

Though the program is currently suspended, the district previously had roughly 130 volunteers helping pass out meals Monday-Friday.

Teachers, parents and locals hoping to help were among the army of approximately 800 volunteers signed up to help in rotating shifts. Additionally, somebody referred to only as a “philanthropist” helped to pay out-of-work restaurant employees to help out at several campuses.

Courtney Martin, a Denton ISD employee who helped coordinate the volunteer efforts, said some of the restaurant workers were helping out at Cross Oaks Elementary, Blanton Elementary and Ryan High School.

Some are new to asking for help

Bomberger said he’d heard from a family who wouldn’t normally have to ask for the sort of help Denton ISD is providing.

Both parents had been furloughed amid the spread of COVID-19, and neither had previously been in the position they found themselves in. He projected there will be many more people asking for help throughout the pandemic.

Even after campuses are eventually able to open back up, Bomberger predicted schools would be enrolling many new faces in the federal free and reduced meal program already in place.

Public schools in Denton County had less than three months of normal classes in 2020 before the pandemic forced students and teachers online.