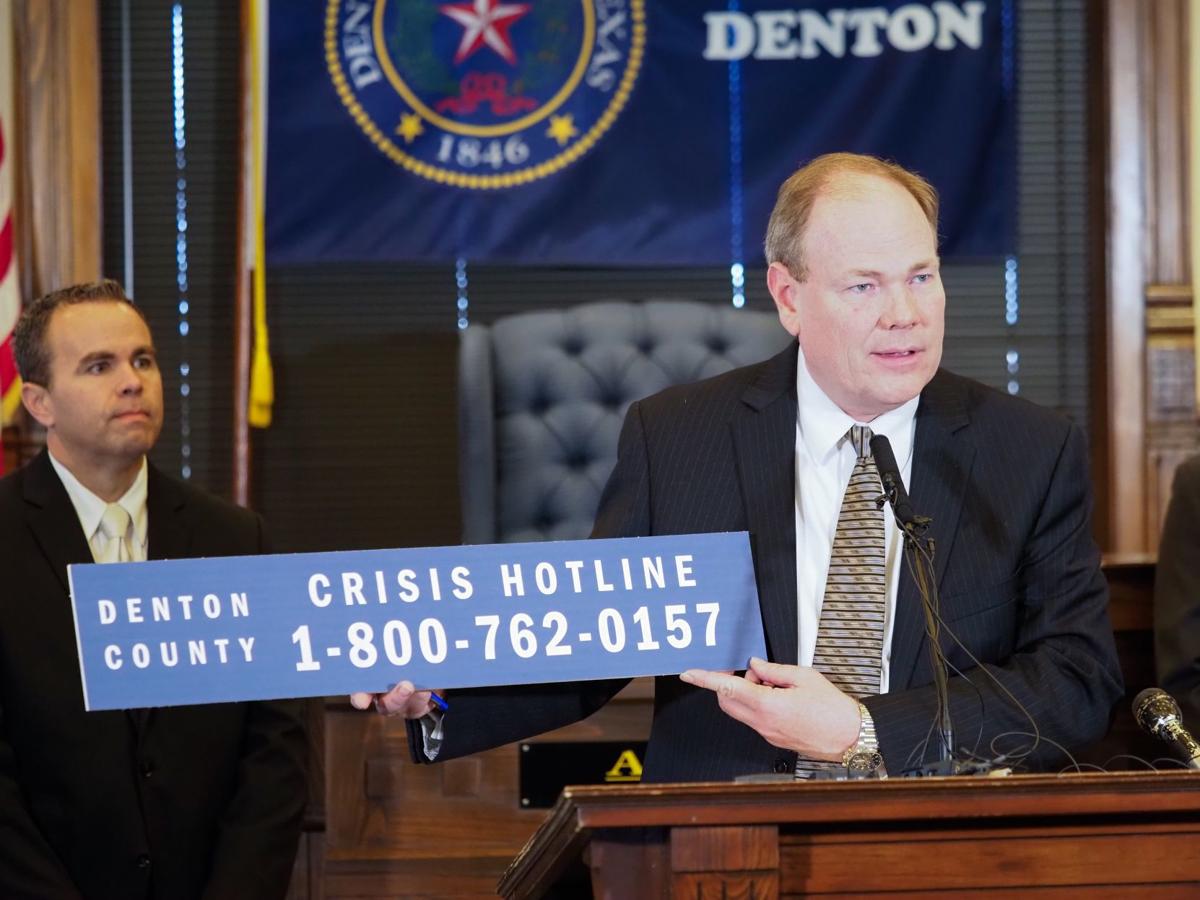 Denton County Judge Andy Eads confirms the first COVID-19-related death in Denton County, while letting the public know about the crisis hotline during a news conference at the Denton County Commissioners Court Thursday. 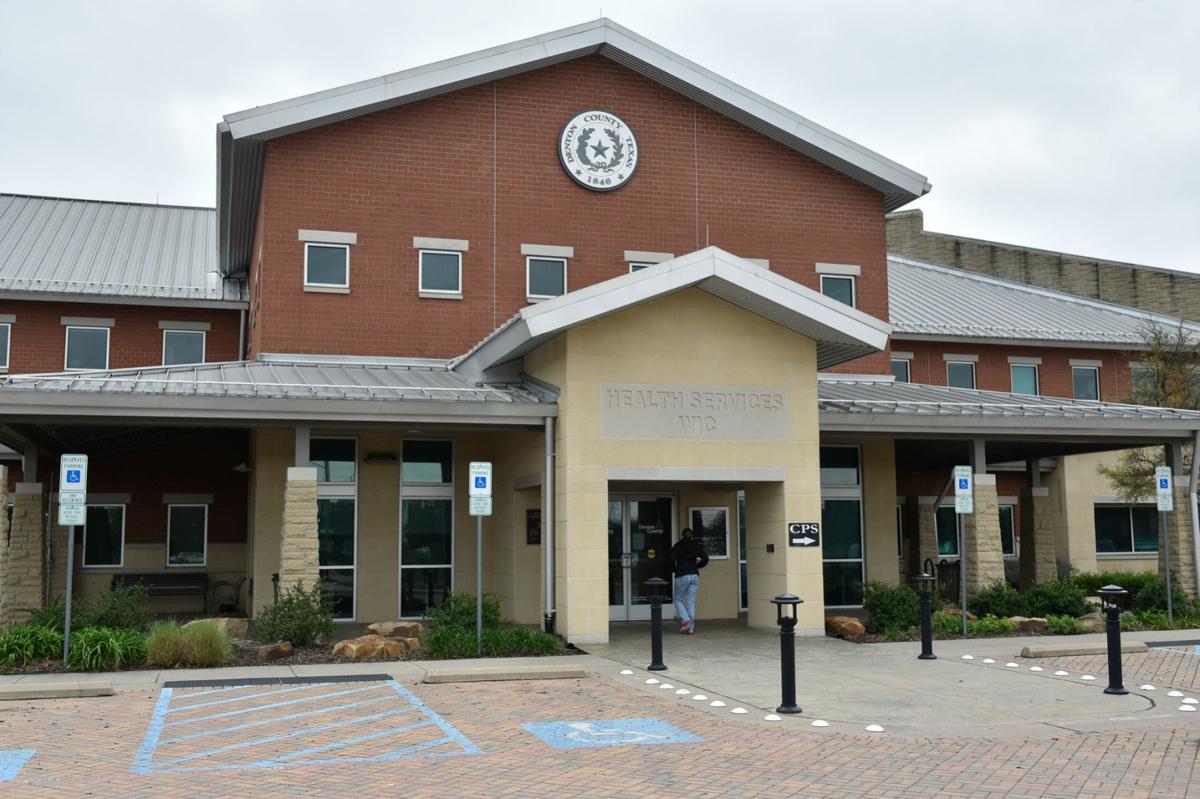 Denton County Judge Andy Eads confirms the first COVID-19-related death in Denton County, while letting the public know about the crisis hotline during a news conference at the Denton County Commissioners Court Thursday.

The patient, a Lewisville man in his 40s, died Wednesday night.

“The situation will get worse before it gets better,” Eads said during an afternoon news conference. “Stay home, be responsible and wash your hands, and realize that your carelessness or cavalier attitude will result in someone’s death.”

He also announced there were now eight cases at Denton State Supported Living Center and 83 confirmed cases in Denton County.

A total of 56 people are in home isolation, while 24 others are hospitalized, and three cases are pending investigation.

A concern at the State Supported Living Center, which is home to 400 people with developmental disabilities and employs more than 1,000 staff members, is that an exponential outbreak would overwhelm the county’s medical infrastructure. Officials asked earlier this week for an independent hospital on the center’s campus.

Eads said additional resources, such as test kits, were discussed Wednesday night with Gov. Greg Abbott and that resources were expedited.

“Denton County is at a critical juncture in our fight against COVID-19, and our hospitals desperately need your cooperation to stay home and practice social distancing,” Eads said. “We cannot allow COVID-19 to spread exponentially in our communities and our most vulnerable residents. A surge will collapse our medical infrastructure, and we cannot allow that.”

Denton County has five traditional hospitals, with two in the city of Denton — Medical City Denton and Texas Health Presbyterian Hospital, whose total bed counts are 208 and 255, respectively.

While statewide coronavirus testing is limited, public health officials are prioritizing testing for those most at risk, such as DSSLC residents, said Matt Richardson, director of public health. Once testing is sufficiently expanded, he said, high-risk staff members at the facility will be tested, too, but an available time frame was not known due to limited resources.

Denton County Public Health has made recommendations to Denton’s center, Richardson said, which include guidelines for monitoring staff, high-risk staff and residents. Measures include facility restrictions and checking both staff and resident temperatures, while isolating residents and sending staff home if symptoms, such as fevers, are detected.

As of Thursday, a total of 140 residents at the facility have been tested, he said, adding that additional testing is expected over the next days and weeks. Additional cases of the novel coronavirus are expected out of the facility and countywide, he said.

“We are focusing and prioritizing testing for highest-risk residents right now, and that is to protect both residents and also to protect the medical infrastructure in the county,” Richardson said. “What we do now is that there is going to be additional cases, and unfortunately, maybe even additional deaths across the county — because this is a pandemic.”

Public Health officials have not considered whether to utilize retired physicians or nurses to help combat the coronavirus outbreak, like in Dallas County, Richardson said, but that all options were on the table. He said county officials are in discussions with the Texas Board of Nursing and the Texas Medical Examiners to better understand licensing requirements.

On Friday, Eads said, the County Commissioners Court will discuss ratifying the current executive order, which went into effect at 11:59 p.m. Wednesday. The mandate, which remains in effect for one week unless ratified, ordered all residents, non-essential businesses and workers to stay at home. The aim is to reduce community spread of coronavirus in Denton County.

While residents will not be stopped, he said county officials are requesting compliance of the order before enforcement is taken — which would include possible fines of up to $1,000 and up to 180 days in jail. As the situation evolves, commissioners will consult with health care providers and the public to help reduce the likelihood of further spread.

“We will look at [the executive order] on a weekly basis,” Eads said. “If the tide has turned, and we have been successful at flattening the curve and allow capacity for health providers, and once we are over that edge, we will remove the measures.”

COVID-19 symptoms include a fever, persistent cough and shortness of breath.

Public health officials are urging individuals to call ahead before arriving at the emergency room or doctor’s office to limit the spread of the virus.