The Denton City Council will require individuals to wear face coverings through Aug. 4 to help slow the spread of coronavirus.

Council members adopted the measure in a split vote as Texas Gov. Greg Abbott did an about-face in reopening the state’s economy — and despite a threat of violence council members received if they adopted such a measure.

“It makes me sad that it [wearing masks] has become so politicized that we have to face threats to do this,” said council member Keely Briggs through tears. “It’s gross.”

Both Mayor Chris Watts and council member Jesse Davis had a change of heart since revising the city’s disaster declaration Tuesday.

“The only things we have within our role to not have another shutdown and to get the kids back in school this fall is these stupid little masks,” Davis said.

Watts agreed, saying that he’d been thinking about the issue for a long time. This week, he asked his personal physician about face coverings during a checkup.

“He was clear and emphatic,” Watts said. “They’re what we have to do to fight what we’re fighting right now.”

On Tuesday, Davis said he was willing to consider the requirement, but he was uncomfortable putting business owners in the middle.

Since Tuesday, however, the city received more information from the Denton Chamber of Commerce about whether there’s business support for local rules — and there is. The chamber surveyed its members and found that 45% already require masks, and that 63% support a mask requirement.

Hudspeth said the recent spike in infections concerned him, but since county health officials were still comfortable with the capacity at area hospitals, he was, too.

“Based on the data, we’re being punitive to a group of people that is not the target group we need to address,” Hudspeth said of the rise in infections among patients in their 20s and 30s, who are less likely to need hospitalization.

Usually laconic during most council meetings, Ryan shared stories of struggles he has had keep his distance from others while in stores. He has an underlying health condition that makes it dangerous for him to wear face masks.

The city’s ordinance accommodates such needs.

He noted the infection’s rise among younger patients, too, and said the governor was right to close bars in response to the spike.

“We need to be teaching the 20-somethings and the kids how to properly social distance,” Ryan said.

Briggs reminded council members that many people of that age are essential workers, or work in the newly reopened service industry.

And, she added, many emails the council got opposing the measure came from people who don’t live in the city and were obviously confused that the city doesn’t make rules for the entire county. 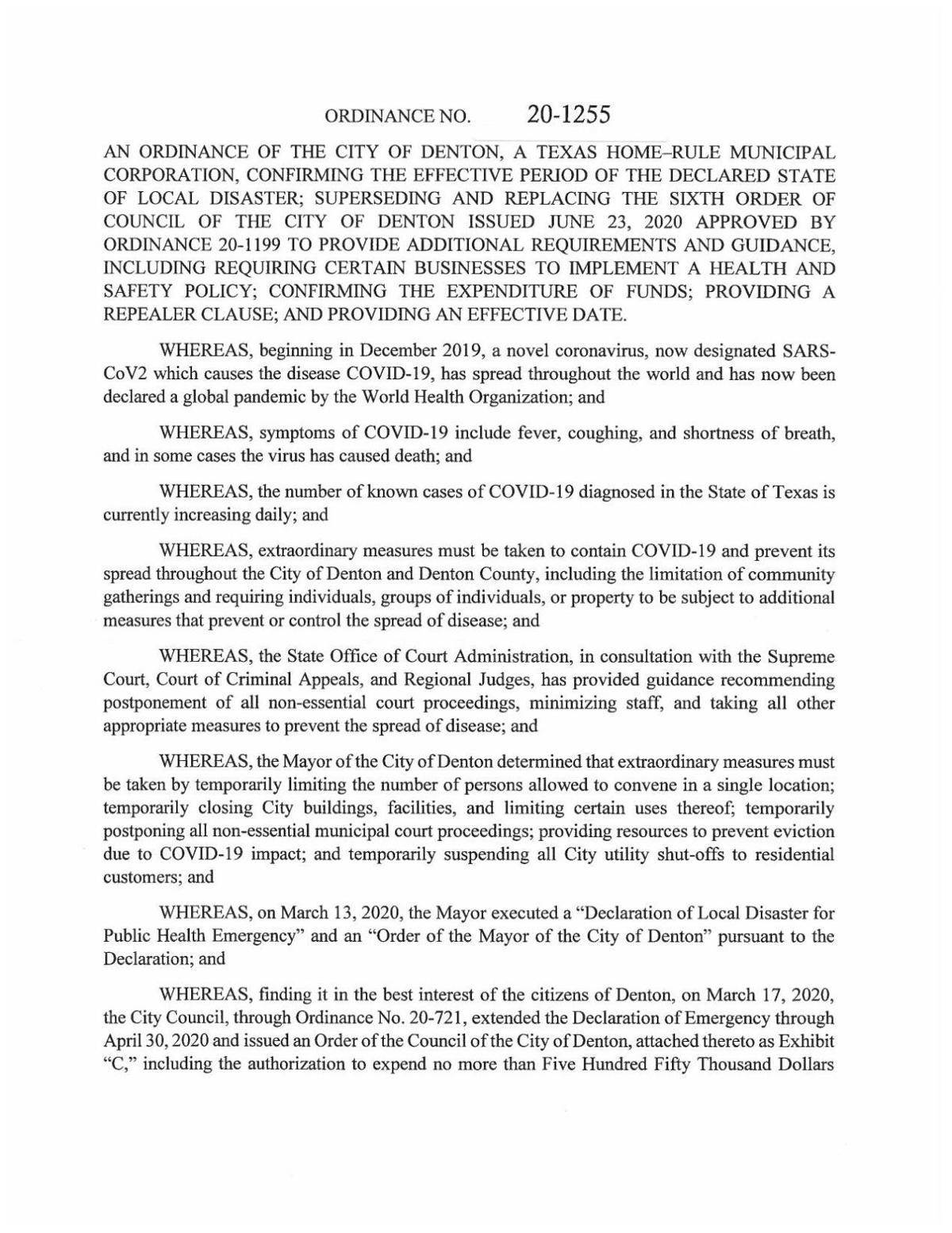 In accordance with the governor’s orders, Denton businesses that provide goods and services to the public will be subject to the requirement that both employees and customers wear face coverings.

They have about a week to develop their public safety policy and plan, including signage, before enforcement begins. The city staff said they will work on outreach and education before ever writing a business a ticket.

In addition, public gatherings of 100 or more are banned through Aug. 4, in accordance with Abbott’s orders.

Residents concerned about an individual business’s compliance with the latest emergency orders are encouraged to submit comments on EngageDenton.com.