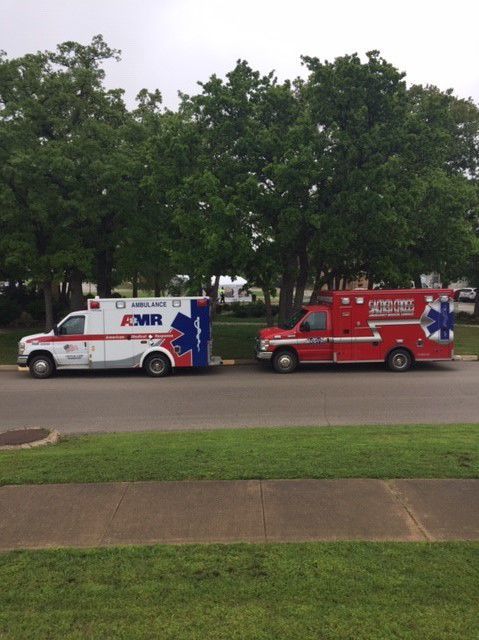 A photo from last week shows two of the four ambulances stationed at the Denton State Supported Living Center by state emergency managers. EMTs are stationed at the center to help treat residents on-site and transport residents to hospitals in the region. 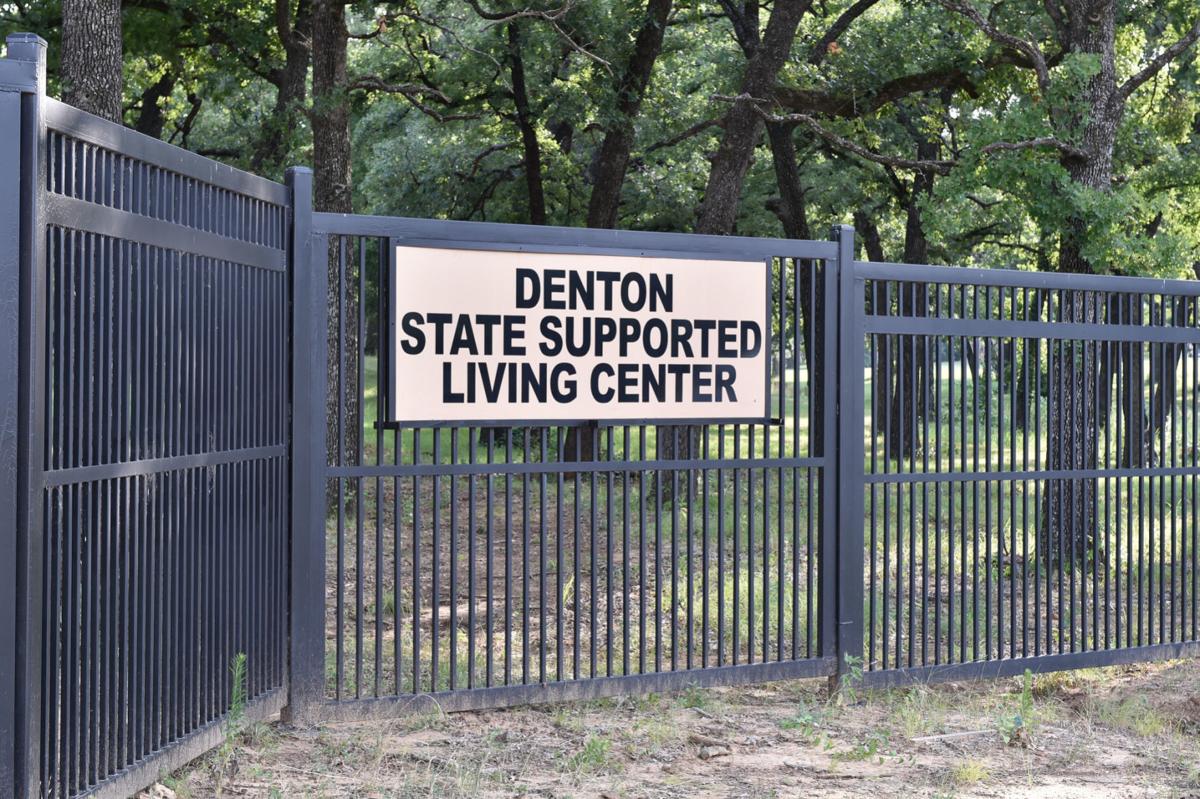 A photo from last week shows two of the four ambulances stationed at the Denton State Supported Living Center by state emergency managers. EMTs are stationed at the center to help treat residents on-site and transport residents to hospitals in the region.

Conflicting accounts about personal protective equipment have surrounded the COVID-19 outbreak at the Denton State Supported Living Center — with some staff expressing continuing concerns about their personal safety.

The Texas Health and Human Services Commission says the center is following proper guidelines with equipment, social distancing and limiting access between the center’s homes, but some staffers say they lack equipment and are being required to work in homes that have been exposed to coronavirus.

Staff at the center first expressed concern about a coronavirus outbreak in the facility before the first confirmed case in Denton County was announced. That concern grew stronger when, on March 19, an email was sent out informing staff that a resident who was hospitalized was being tested for the virus.

The outbreak at the living center, confirmed by Denton County Public Health as community transmission, put 443 residents and 1,478 employees at risk and worried officials about possibly overwhelming Denton County’s medical resources. The residents are people with intellectual and developmental disabilities — a group that is at risk for more serious cases of COVID-19, according to the U.S. Centers for Disease Control and Prevention.

Staff at the living center have expressed to Denton Record-Chronicle reporters since mid-March their concerns that the center wasn’t — and still isn’t — well equipped to handle the outbreak. Those staffers all requested anonymity for fear of retaliation.

Among the concerns shared were worries about a lack of personal protective equipment and fears that the employees would become infected. A total of 25 DSSLC employees have tested positive for the virus as of Friday.

“[Administration] are using us that have been exposed to the sick individuals to work with other individuals in different homes,” said one nurse on March 22. “If we are positive, we’re exposing our family and others in the community.”

A total of 50 DSSLC residents, on top of the 25 employees, have tested positive for the virus as of Friday. The first was reported on March 20, although it was not publicly known until March 21, when Denton County Public Health reported a total of four positive cases.

An email sent to staff on March 19 stated that the administration learned that day that a hospitalized resident was being tested for COVID-19, but the email indicated the results wouldn’t come back for three to eight days.

The email told people to pass the message along to employees without computer access. One staffer said she didn’t know about the confirmed cases until the Record-Chronicle reported them on March 21.

Access restricted to units, but staff still working there

After the first few cases were reported within the facility, Denton County Public Health worked to organize testing for more residents and staff, with higher-risk individuals going first. As of Friday, all but two residents had been tested.

Measures implemented last week included restricting access to units — “apartments” — where exposed residents lived. Staff learned of the potential case on March 19; however, several have told the Record-Chronicle they were still being told to work in those homes at the time.

“Staff-wise, you may be working in one unit, but you can get pulled to another unit,” a nurse said on March 21. “I don’t think they should be pulling people from one home to another, but they’re still doing it.”

The measures the center planned to take when residents started testing positive included isolating confirmed cases and sending residents to a hospital if needed, along with recommendations for social distancing and preventive measures, according to the Texas Health and Human Services Commission. Anyone entering the facility must have their temperature screened.

However, social distancing at the center is only practiced when practical, Kelli Weldon, a spokeswoman for the commission, said on March 25. Staff who aren’t required to be on campus are teleworking, though the centers must meet certain staffing requirements to provide essential services, she said.

“Additionally, movement around campus and mixing of different units is limited,” Weldon said.

Residents are separated into different units for housing, and each unit has apartments.

“Centers are limiting movement around campus, using PPE when appropriate, have implemented telework when possible; the same checks are occurring at the facility entrance, and the same visitor restrictions are in place,” Weldon said.

A report from The Dallas Morning News on Thursday showed staff were still being sent to work with residents who tested positive.

Another nurse who works closely with residents said Tuesday that they’re working in safe environments.

“If employees enter a home without [personal protective equipment], that is their choice and highly discouraged,” she said.

Although she said it’s highly discouraged, an email sent to staff from the Texas Human Health and State Services Commission and obtained by The Dallas Morning News said any staff who refused to work wherever assigned would be written up for insubordination.

Staffers who resigned would never be rehired, the email states.

Personal protective equipment during the coronavirus pandemic has become synonymous with gowns and N95 masks, but not all staffers get the same equipment. HHSC spokeswoman Christine Mann said Wednesday that staff who don’t work in units with sick or exposed residents are provided surgical face masks.

“Staff working with sick residents, or residents who may have been exposed to COVID-19 are being supplied the appropriate personal protective equipment and are following all CDC guidelines to protect their safety and prevent spread,” Mann said. “Currently, Denton SSLC has the supply necessary to protect staff and residents, and we’re working closely with state and federal authorities to ensure we continue to have the supplies we need.”

A risk management staffer at the center said some nurses have also been wearing handmade masks.

“Nurses I have talked to say that N95 masks are in short supply,” he said. “One nurse makes her own for herself and for other nurses. It’s a layer of fabric, an air conditioner filter she cuts to size, another layer of fabric all sewn together like a sandwich.”

He said people arrived at the gates of the center last week with pallets containing surgical masks to donate, which are used by staff who don’t work with sick or exposed residents.

The Texas Department of State Health Services’ strategies for optimizing the supply of personal protective equipment is broken down into three categories: conventional capacity, contingency capacity and crisis capacity.

Those two strategies also note that N95 or equivalent respirators can be used beyond the manufacturer-designated shelf life. The CDC also provides this information in its frequently asked questions about N95 respirators.

“In times of increased demand and decreased supply, consideration can be made to use N95 respirators past their intended shelf life,” the CDC states. “However, the potential exists that the respirator will not perform to the requirements for which it was certified.”

Staff and essential visitors who wish to enter the state supported living center must have their temperatures screened. Mann said the center uses FDA-approved temporal and infrared thermometers to screen people. Anyone who fails temperature screening is denied entry.

Aid for the Denton center

Denton County and city officials expressed concerns in a March 25 letter to Gov. Greg Abbott that the outbreak at the Denton State Supported Living Center could overwhelm the county’s medical facilities. In the letter, they also asked Abbott to approve a temporary hospital at the facility.

Two days later, state health officials announced they would set up emergency medical resources on-site and coordinate hospitalizations with the hospitals in the Dallas-Fort Worth area.

Four EMT units are stationed outside the campus for those who need transportation to hospitals. In a memo to Denton City Council on March 28, City Manager Todd Hileman said Denton City Fire Chief Kenneth Hedges and Police Chief Frank Dixon are both involved in a unified command structure at the center with state emergency services experts.