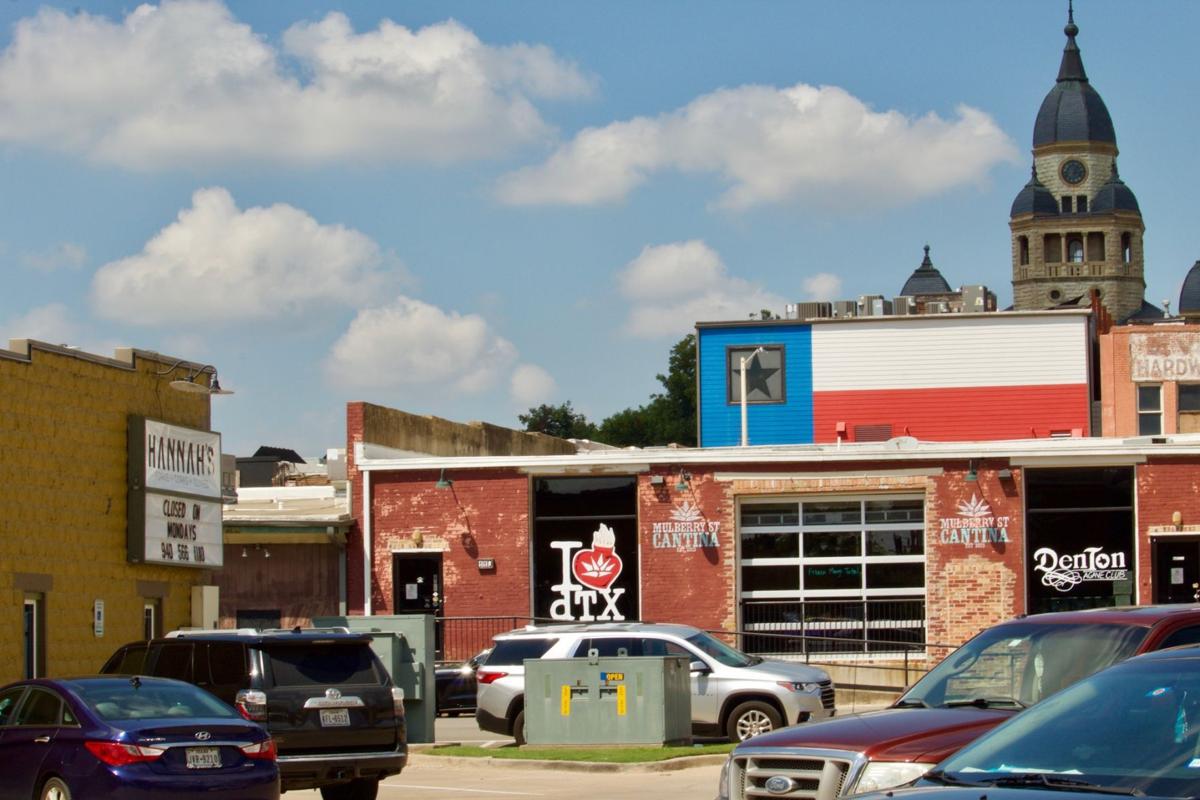 The owners of Mulberry Street Cantina, on Mulberry Street south of the Square, have shown interest in Denton’s pilot program for temporary street dining space, but as a bar, the cantina remains closed under the governor’s orders. Hannah’s Off the Square, across the street, already has a patio for diners. 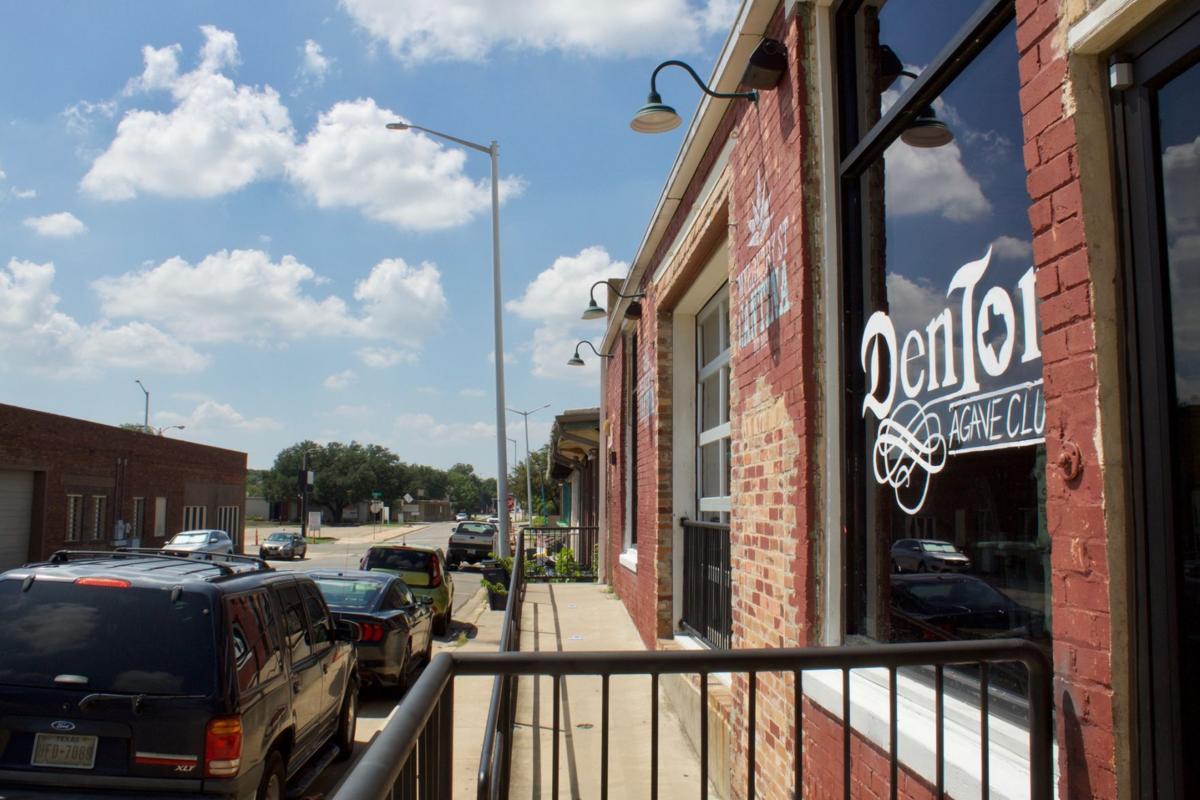 The owners of Mulberry Street Cantina, on Mulberry Street south of the Square, have shown interest in Denton’s pilot program for temporary street dining space, but as a bar, the cantina remains closed under the governor’s orders. Hannah’s Off the Square, across the street, already has a patio for diners.

Denton’s “streatery” program gives downtown businesses the option of extending their seating outdoors during the COVID-19 pandemic, but one month into the program, it’s still being met with mixed reactions from local businesses.

The city established the six-month pilot program, which runs through Jan. 14, in July to allow businesses in the mixed-use downtown district to create temporary outdoor seating in parking spots or loading zones. Businesses can apply for permits to construct seating and other amenities like shade structures in up to two parallel parking spots or an unused right of way. Two applicants per street can establish a streatery, which is limited to customers during business hours, or a parklet, which is free for public use at all times, on a first-come, first-served basis.

But the program excludes businesses on Elm, Hickory, Locust and Oak streets — meaning many of downtown’s popular restaurants, which would likely see more benefit from establishing outdoor seating than other types of businesses, are left out.

Richard Cannone, deputy director of development services for the city, said the Denton City Council placed those limitations on the Square’s main streets for the pilot program.

Cannone said staff looked at what other cities were doing when designing the program but decided to limit design restrictions to maintain downtown’s authentic feel.

“We wanted to make sure when we were presenting the thoughts and ideas for council to consider was not putting too many limitations on the design and letting it stay Denton and letting folks have that creativity to do what they wanted,” Cannone said.

Among eligible businesses, reactions to the program have been mixed.

So far, the only business to show sustained interest in the program has been Mulberry Street Cantina, whose plans are on hold until Gov. Greg Abbott allows bars in the state to reopen, Cannone said. Mulberry was considering the program before Abbott ordered Texas bars to close again in June amid a statewide spike in coronavirus cases.

Co-owner Jeff Doyle said the cantina is still interested in the program, but they don’t have concrete plans in place yet.

“We don’t actually have any outside seating right now, so that would help us out quite a bit, even if it was, you know, not a huge area that they’re talking about opening up,” Doyle said.

Doyle said a streatery could be beneficial beyond the pandemic, since he thinks Mulberry’s customers would enjoy having the option to sit outside.

“Everything’s very preliminary right now, but we’re excited to move forward with it at some point,” Doyle said. “It’s hard to plan anything right now.”

City staff have gotten a few calls about the program, including from those outside the downtown area who are not eligible, but that has been the extent of the interest shown, Cannone said.

Another consideration for eligible businesses is cost; the expense of establishing a streatery or parklet has to be met entirely by applicants. Aside from the costs of the seating and any awnings, businesses would also be responsible for providing a wheel stop, soft-hit posts and buffers to protect users from street traffic — either in the form of durable seating, temporary railings or planters — as well as paying a $50 building fee and, in the case of a streatery, an additional $50 license fee. Businesses that want to serve alcohol would also need to apply for a temporary license modification with the Texas Alcoholic Beverage Commission.

For Phil Shirley, owner of Hannah’s Off the Square, the costs are a deterrent.

“You know parklets are a great visionary deal and I would love if people would sit outside to eat and do all that good stuff but, unfortunately, you know like last fall, we had bad weather almost every weekend, I believe, and when that happens, people don’t want to sit outside,” Shirley said. “So, for us to invest, you know, $3,000 or $4,000 on a parklet just in the hopes that people come and stay, it’s kind of a little more money than we want to spend on a trial basis.”

Hannah’s, which already has a patio, has not experienced an increase in demand for outdoor seating despite COVID-19, Shirley said.

“Our business hasn’t changed, and I think if the city of Denton wanted to get some actual good data, they could go around and ask people how their patios are doing,” Shirley said. “I don’t have to wait at patios when I go somewhere, I’m always right there getting a seat, and it’s not like they’re overcrowded — some places are, but very few.

“In reality, people want to sit inside. We’ve done all the preparedness for COVID, invested in that, [and] we want people inside being comfortable instead of having mosquitoes all around them and flies. I think they’re nice, and it’s a good vision, but to invest $3,000 or $4,000 on a trial program as a restaurant with very thin margins, that’s distracting us from running our business to do that.”

If the program goes well, Cannone is hopeful parklets could become gathering spaces during community events like the annual Christmas tree lighting.

City staff will talk to local business owners near the end of the program and bring findings to the City Council, where the program could be extended if it’s a success, Cannone said.

“I love the Square, it’s such a cool place, [and] it’s unfortunate we’ve lost some businesses already as a result [of COVID-19],” Cannone said. “I think one of the coolest things about the Square is you don’t have a lot of the chain businesses you see in a lot of other downtowns, so for me, the success would be continuing to bring people downtown and supporting those businesses and supporting Denton overall.”