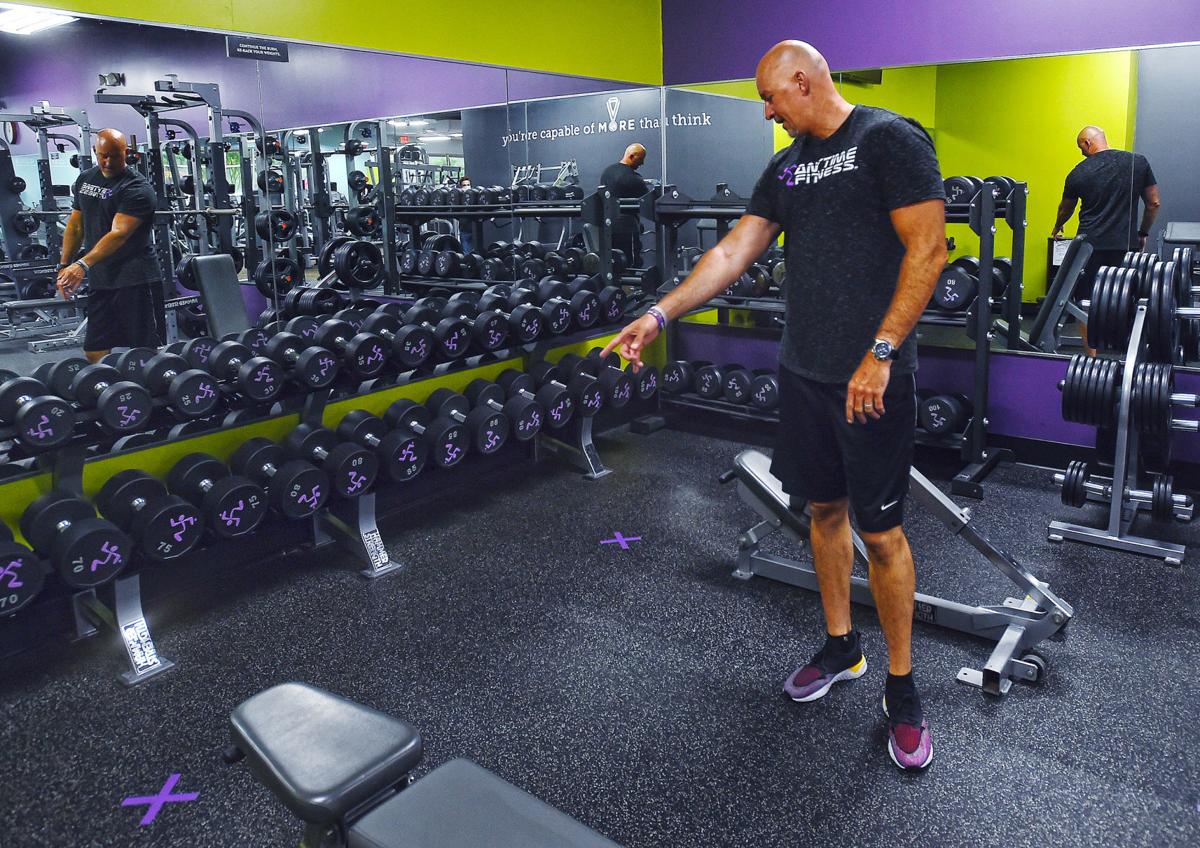 Anytime Fitness co-owner Jerod McCloud on Saturday points to social distancing marks his gym patrons will be asked to adhere to when his business reopens Monday. 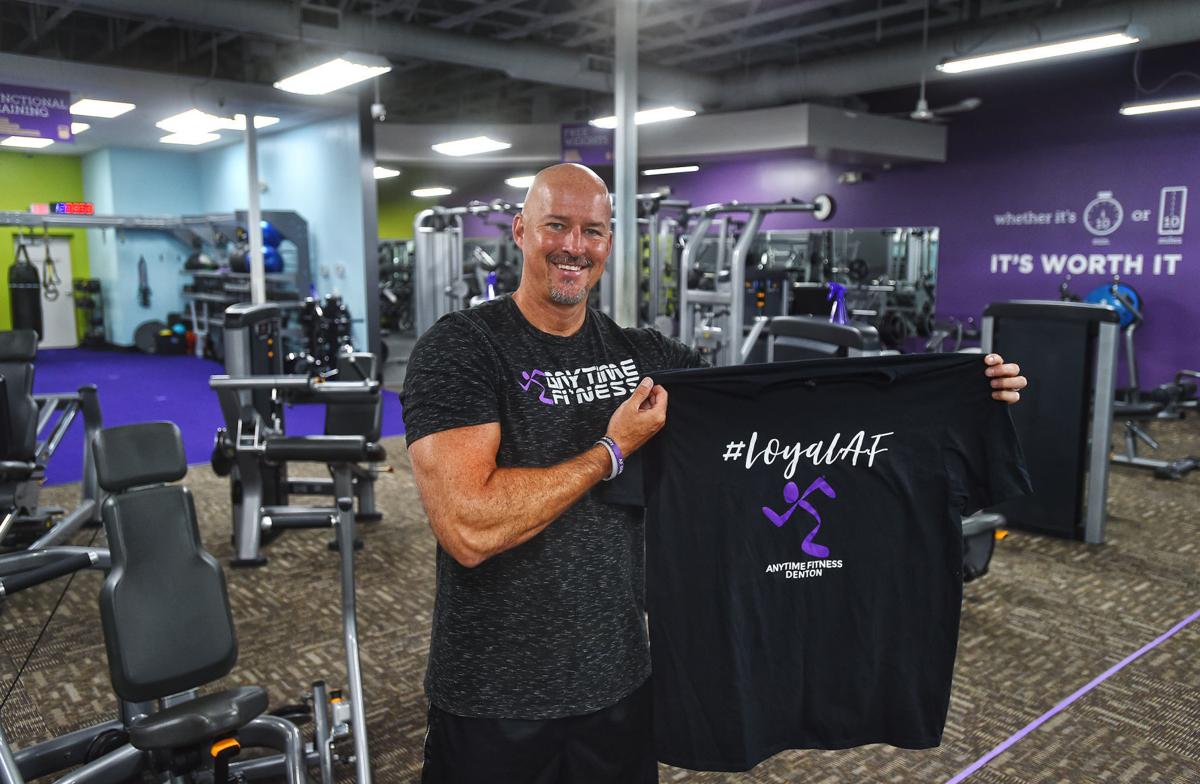 Anytime Fitness co-owner Jerod McCloud shows off a T-shirt for loyal patrons of his gym Saturday. McCloud has instituted new social-distancing measures at his gym for the business’s Monday reopening.

Anytime Fitness co-owner Jerod McCloud on Saturday points to social distancing marks his gym patrons will be asked to adhere to when his business reopens Monday.

Anytime Fitness co-owner Jerod McCloud shows off a T-shirt for loyal patrons of his gym Saturday. McCloud has instituted new social-distancing measures at his gym for the business’s Monday reopening.

When Jerod McCloud took over co-ownership of Anytime Fitness-Denton back in December the timing seemed perfect, said the strength and conditioning director for Denton ISD.

After all, he had been about a month away from the resolution rush and come the new year, the first quarter outlook was shaping up — and then the pandemic hit, and the fitness center closed. Overnight, he and his three co-workers were without any means of income or way to pay the bills accrued by operating the fitness center, he said of the challenges.

“It was kind of surreal,” he said, recalling the last day the fitness center was open. “It was a weird feeling with our members because everybody came in that morning to get their last workout and there was this somber feeling. ... Everybody knew we were going to close for a period of time, but then it was extended from 10 days to a month and then two months and so on.”

For almost two months, 52 days in total, McCloud waited for the all-clear, and now, his hope is for a gradual return to normal.

During a news conference on May 5, Gov. Greg Abbott announced the next phase of reopenings, beginning with hair salons and then moving onto gyms, offices and nonessential manufacturing on Monday, May 18. The decision comes during an increase in cases of the coronavirus and an overall increase in testing, however, state officials say that flare-ups are expected.

Since May 1, though, the state of Texas has reported an overall increase of 23% in positive cases, according to the Texas Department of State Health Services.

As most of the economy reopens and person-to-person exposure increases, an increase in cases can be expected, though adherence to social distance and face covers can help, DCPH spokeswoman Jennifer Rainey said.

To help mitigate the virus from spreading unchecked, newly reopened commerce must abide by similar guidelines to previous reopenings, such as capacity limits and restricting access to certain parts of the facility. In addition to locker rooms and showers being closed at gyms, workout equipment — a frequently touched item — must be disinfected after each time it’s used.

At Anytime Fitness-Denton, located at 5050 S. Teasley Lane, enhanced cleaning procedures were undertaken in preparation for Monday’s reopening, including having the air duct, vents and carpets professionally cleaned. Although capacity will be limited to 25%, or 22 members including four employees, other reconfigurations to maintain compliance are being prepared.

“During shutdown, we have completely sanitized and decontaminated the entire facility,” McCloud said about the 24-hour facility. “We’ve taken out a few pieces of equipment, too, so we were able to space things out by six feet.”

Specifically, he said the floor volume of some equipment like kettle bells, medicine balls and bands would be reduced and available on a checkout basis only. In addition, the fitness center has laid out place markers on the floor to indicate social distancing and will be reducing two-way traffic between machines by implementing a one-way path.

Although most of the economy has reopened, some businesses, like bars, have remained closed without much direction from either the state or regulating agencies. After 61 days without a means of operating or providing an income, most are simply trying to get by, said Alex Moon, general manager of bar and music venue Harvest House.

“I hear random, different little rumors from different bars and that’s all they end up being is just rumors. My staff has been smart and filed for unemployment, but we’re only going to go back with it being a really safe environment,” Moon said.

According to the Texas Restaurant Association, more than 75,000 jobs and more than $630 million in revenue has been lost in the Texas bar industry throughout the course of mandated shutdowns. Although Moon is eager to reopen, he said safety of customers and the safety of public health would factor into their decisions and for now, he is taking things one day at a time.

Moon is hoping for an update from Abbott during his Monday afternoon news conference.

For McCloud, the opportunity to reopen Monday was long-awaited.

Although he remains unsure about the type of turnout he was anticipating, McCloud said a gradual return to “normal” — guided by three factors — was hopefully expected.

“We are in a high-stress time with individuals isolated, and they are stressed in their homes and our club is a place where people can come in and release that,” he said about what might drive customers back to the gym. “There is the physical side of things, the mental side and the stress relief that exercise does, and then, there’s the community feeling we all have missed.”

The fitness center will focus on existing members during the first week of operations, with facets like guest passes and 30-day trial periods put on hold, he said. As well, understanding that some members have become unemployed or seen their pay reduced, McCloud said the center will suspend membership dues on a temporary case-by-case basis.

Leading up to Monday, though, McCloud said there was excitement in the air, adding that he was raring to open at 7 a.m. Monday.

“The last two or three days, we’re witnessing people stopping at the front of the [fitness center] trying to get information as to if we’re open, but we can’t let them in yet,” McCloud said, adding that the first week back would be a trial run to gather data. “But, now that it’s finally here it’s a sense of ‘let’s try to get some things back to normalcy,’ — even just a little bit.”