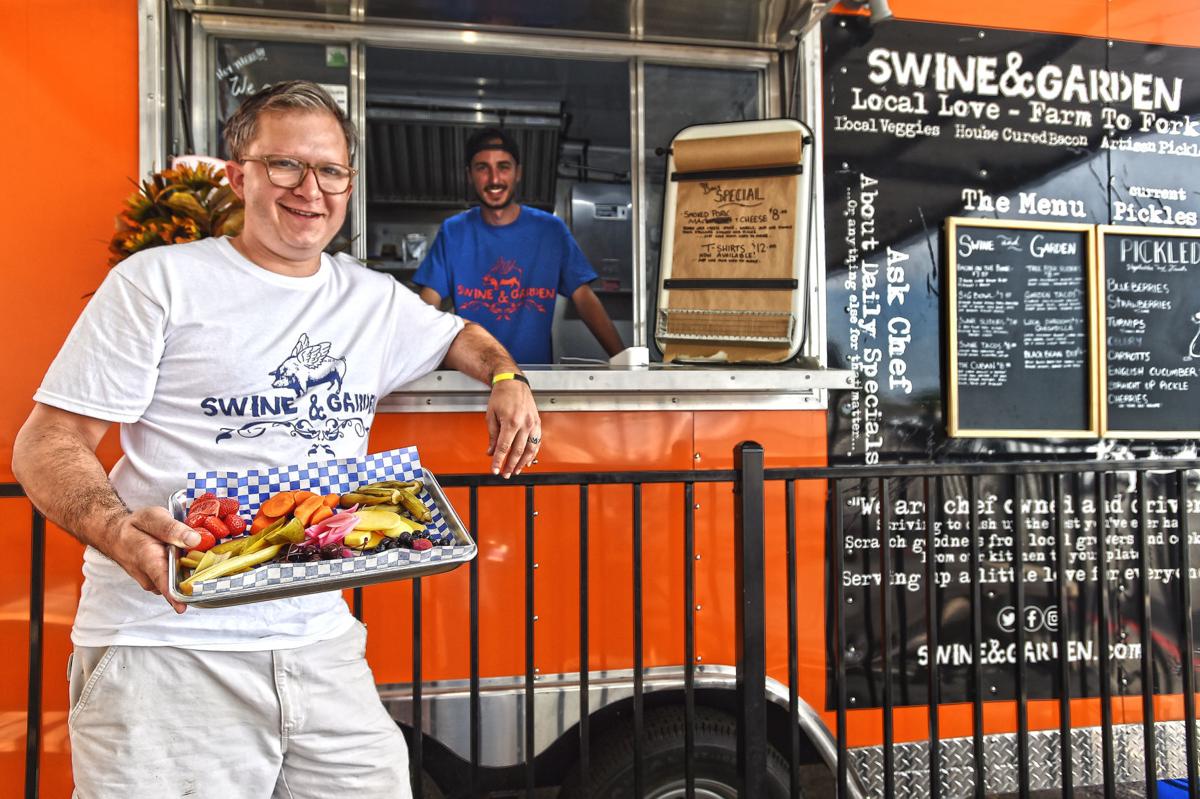 Swine & Garden owner Dave Trosko in front of his food truck with his assistant Jet Troublefield inside while parked in front of Armadillo Ale Works Thursday in Denton. 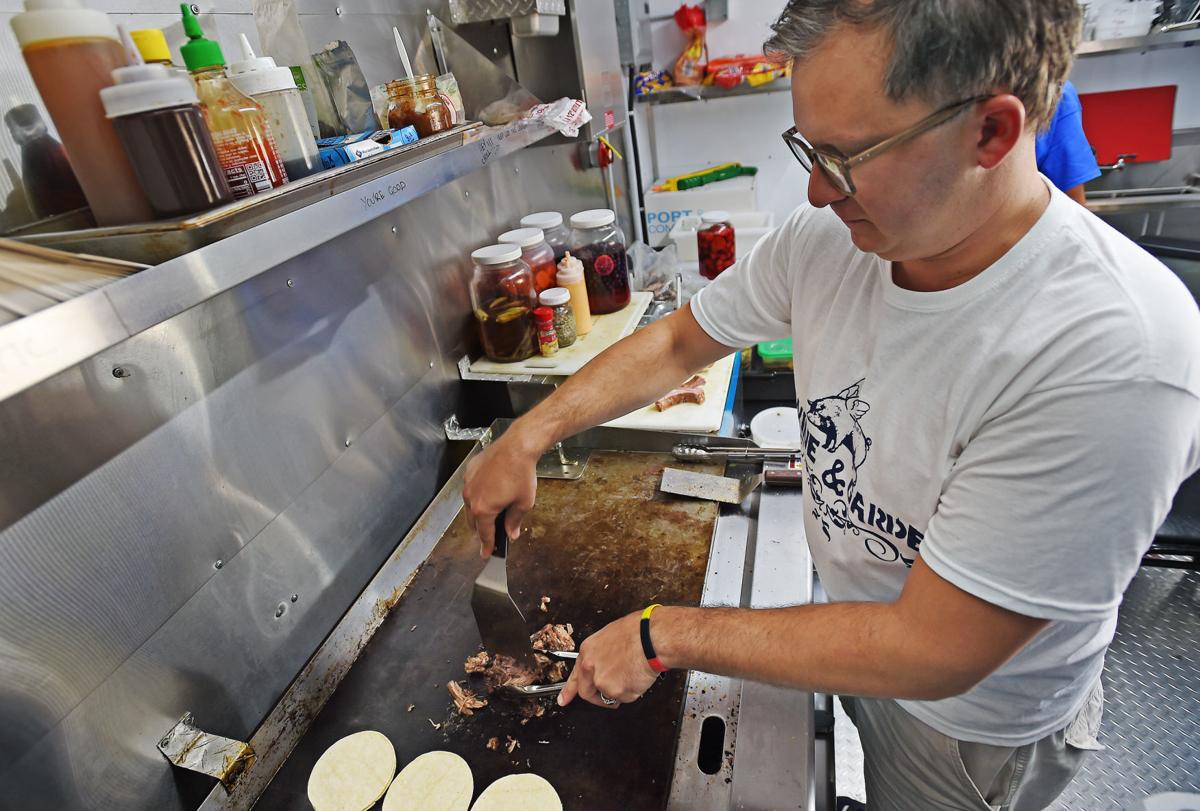 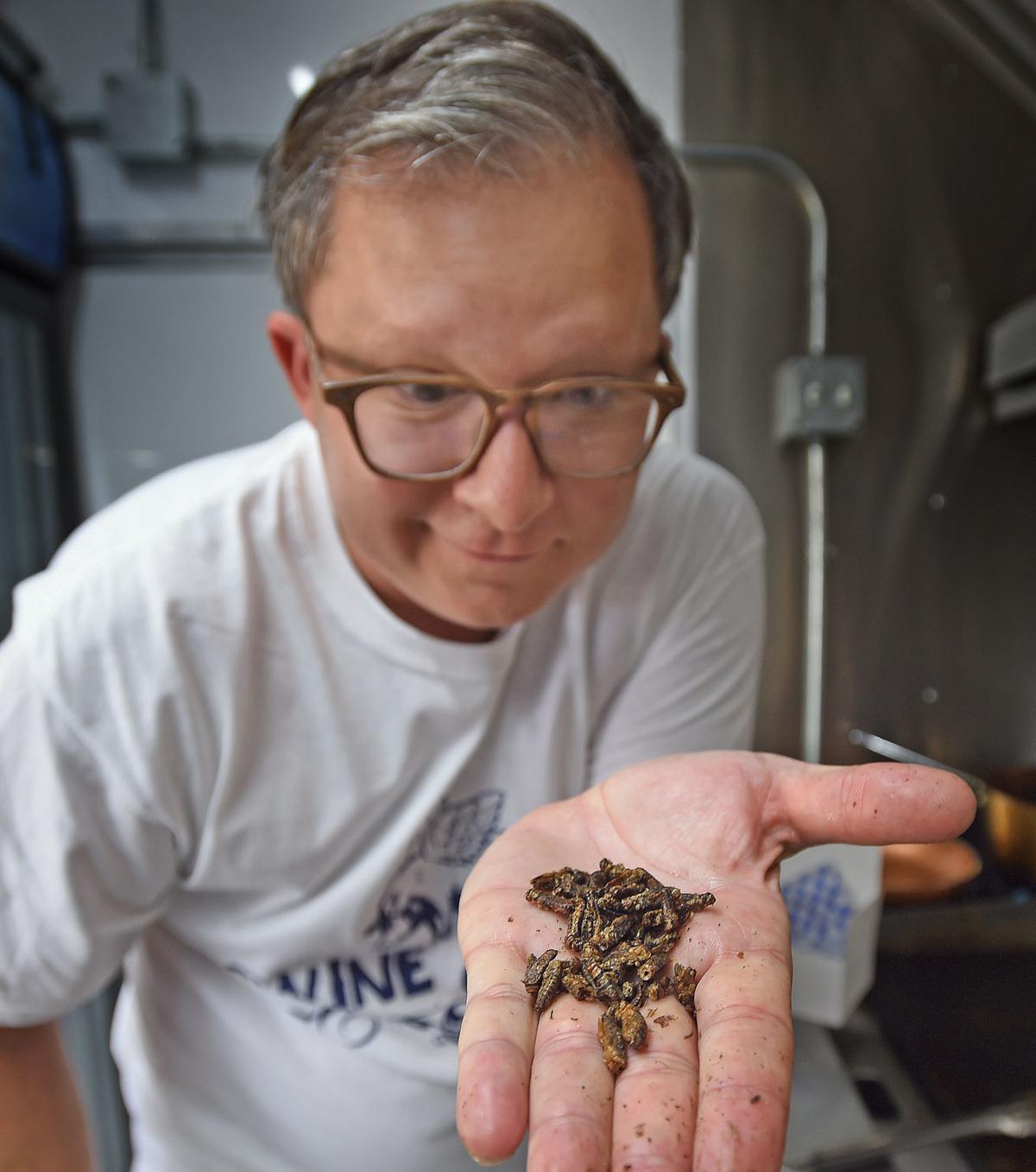 Swine & Garden owner Dave Trosko holds some crickets to sprinkle on his tacos in his food truck outside of Armadillo Ale Works Thursday in Denton. 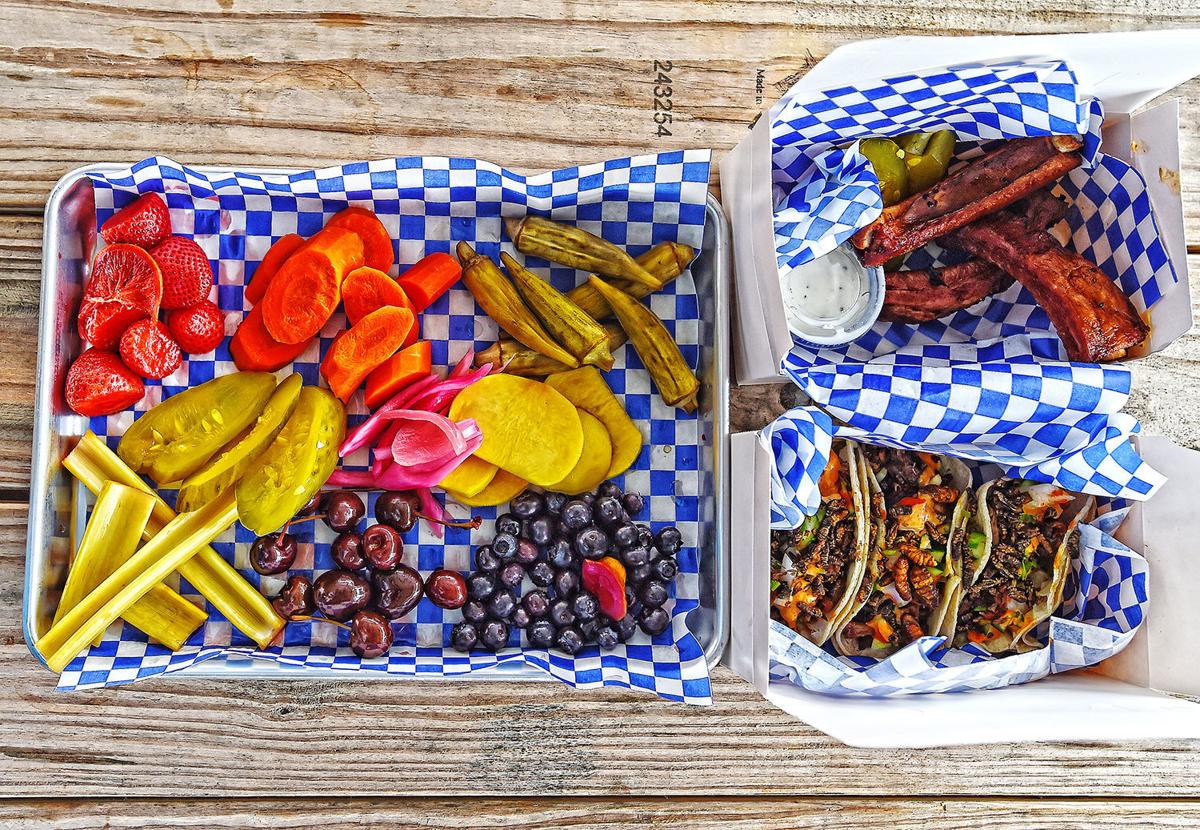 Swine & Garden owner Dave Trosko in front of his food truck with his assistant Jet Troublefield inside while parked in front of Armadillo Ale Works Thursday in Denton.

Swine & Garden owner Dave Trosko holds some crickets to sprinkle on his tacos in his food truck outside of Armadillo Ale Works Thursday in Denton.

Earlier this year, Dave Trosko quit his six-figure job as a culinary director at Taverna Rossa, a craft pizza and beer restaurant in Plano and Southlake, and decided to start a food truck.

Taking the vacancy of the bright orange traitroler parked at Armadillo Ale Works at 221 S. Bell Ave., Trosko launched Swine & Garden last month after 10 years in the culinary scene around the metroplex.

“The beauty of the food truck and this concept is it lends itself to anything. I can reprint the menu tomorrow and do an entirely different thing,” he said. “It’s kind of liberating and awesome.”

The University of North Texas graduate spent a month coming up with a concept, brand and getting Swine & Garden launched by June 1. The idea came from a frustration when his wife followed a vegan diet and they couldn’t go somewhere that had satisfying options for both of them.

“I’ve been in the industry long enough to know that the way this millennial generation eats — everyone is on their own dietary track, so we wanted to be able to create a place that anyone can go to at any point in the week and feel comfortable pointing and clicking on the menu,” he said. “Like, ‘Oh I’m keto so I can eat that, ‘Oh I’m paleo so I can eat that’ is how we wrote our menu.”

The menu is divided into swine and garden: pork-focused items like bacon on the bone, a bacon-cured rib that’s deep fried and served with ranch on the swine side, and garden, with items like curried cauliflower tacos with cucumber pico, kale and sauce.

Each item also has a suggested pairing suggestion that diners can get inside of the tap room. It helps fuel the symbiotic relationship between the truck and the brewery, which are two stand-alone businesses. To visit the truck, customers don’t have to buy a beer and the taproom is all ages, so anyone can visit Wednesday through Saturday, 11:30 a.m. to 8:30 p.m.

What Trosko didn’t realize with the new business is how well the weird stuff would sell. The cricket tacos sell out almost every week, featuring large helpings of Asian-marinated pork shoulder, cucumber pico and about two tablespoons of crunchy crickets and silk larva.

“We’re bringing bugs to Denton and they are super successful,” Trosko said. “It’s something my baby boomer parents are like, ‘You’re insane don’t even do it’ and a lot of people are like, ‘That’s absolutely disgusting why would you put bugs on tacos?’ But most people our age in Denton are like, ‘Cricket tacos, I’ve never eaten a cricket but I’ve seen all about it on Netflix, let me try one of those, are they good?’ Of course they’re good.”

And they are good. The sweetness from the sauce on the pork shoulder paired with the brightness in the pico and the crunch of the bugs is actually delicious — the bugs feel like any other crunchy, salty topping like sunflower seeds. The crunch from the bones or the mealy texture I anticipated before I took a bite weren’t there, and if I didn’t see there were crickets on top, I would never have guessed that’s what I was eating.

As the truck has been open though, a new section has emerged: pickled everything. With pickled strawberries inspired by the mushy strawberries in the bottom of a Sonic strawberry limeade, cherries from a 100-year-old family recipe and southern classics like pickled okra, the pickle menu has become its own beast. The strawberries evoke his exact vision. They took me back to my high school years driving around with my friends and gulping strawberry limeades, while I encountered entirely new flavors with options like curry-pickled turnips, with the seasonings turning the white vegetables a golden hue from the turmeric.

Customers have suggested pickling some of their favorite foods, from grapes to blue Kool-Aid pickles. And people eat them, because most Dentonites are willing to try anything once, he said.

“Denton is full of adventure eaters and I didn’t realize that,” he said. “I came from Plano and Southlake and North Dallas where people are set in their ways a little bit ... Here they want my crazy, weird, off-the-wall things.”

Trosko is working to expand business hours and do a large marketing push for the new semester to help fuel more business. Right now, profit margins are thinner than at restaurants he’s worked at before, but he has a 31% return rate — a balance between new and old customers he hopes to keep moving forward.

“It should be like, $2 or $3 more for everything that’s on the menu, but I’m of the mind I’d rather someone order two things off of the menu instead of one thing, and take an adventure,” he said. “Once we kind of found out Dentonites are willing to try anything once, and if you keep it at a decent price point — our pickles are only $1.50 for a nice handful — they’ll throw money at you.”