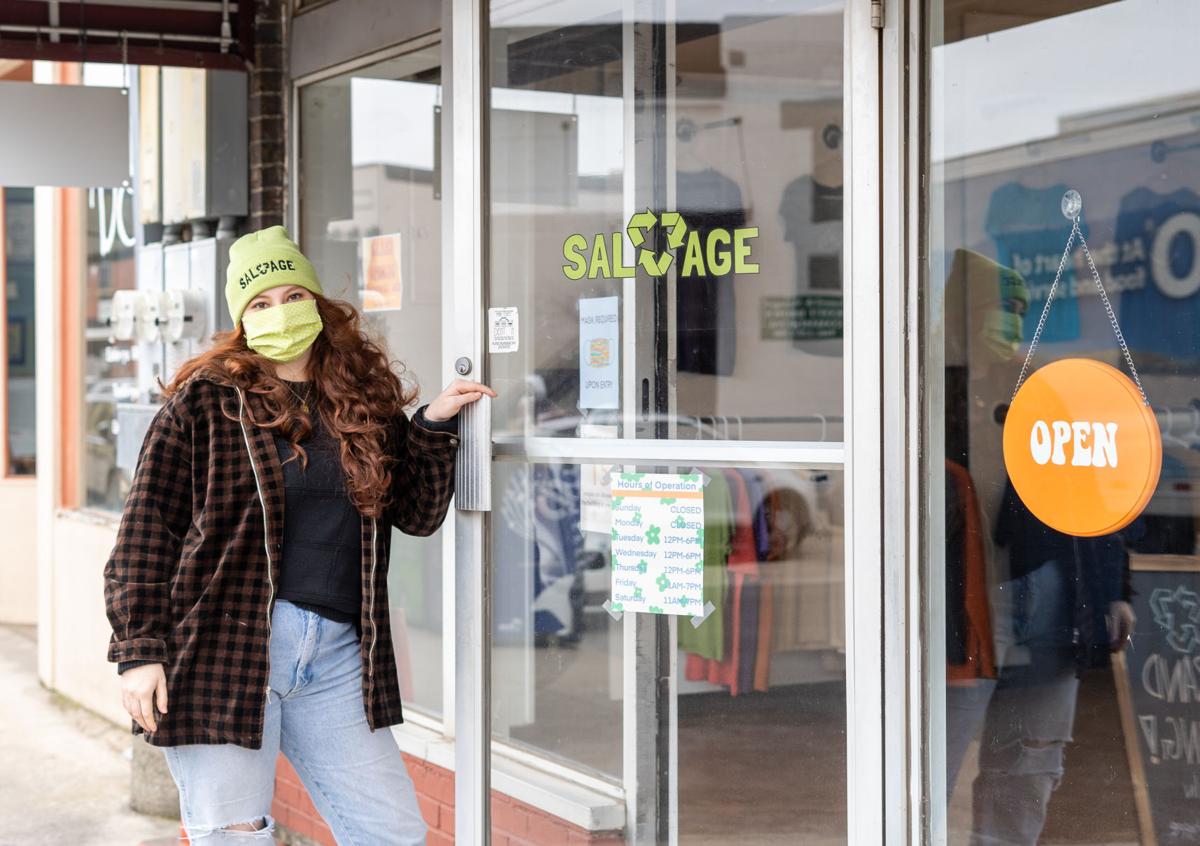 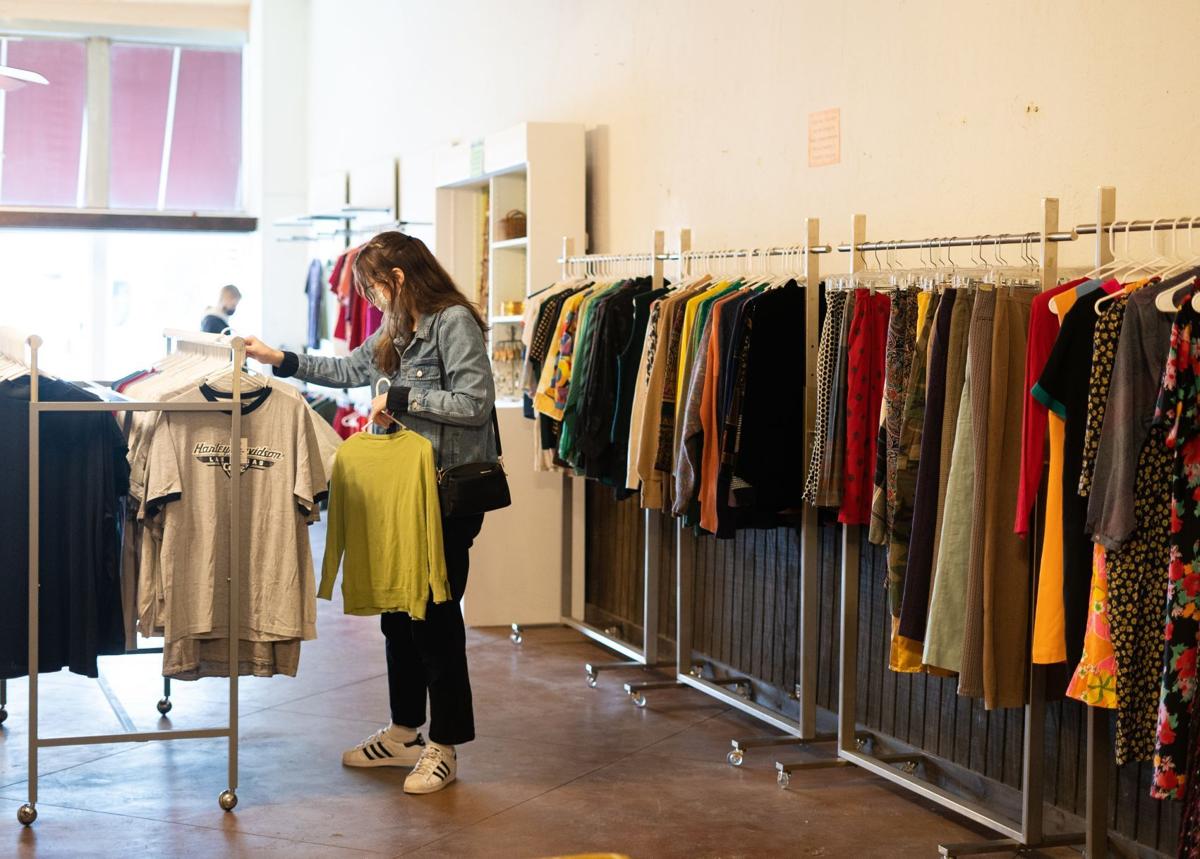 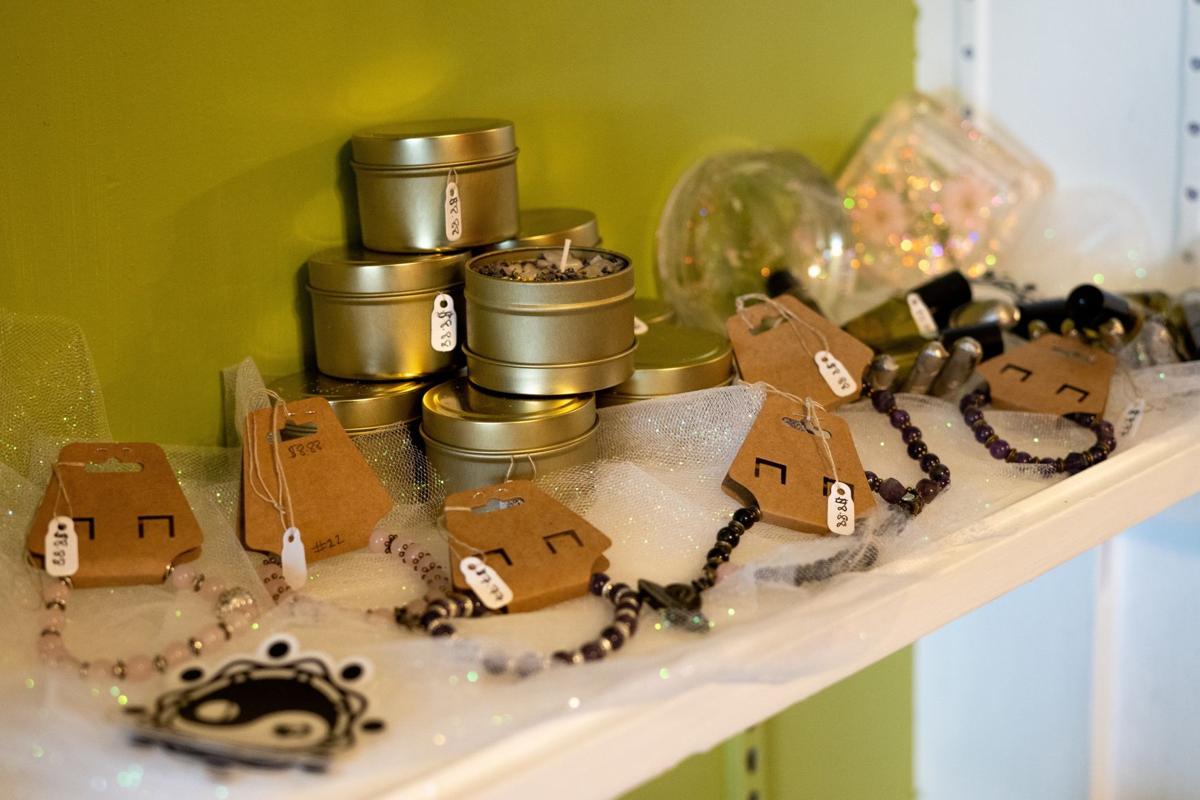 Not long after the doors of one vintage clothing store closed in downtown Denton, another has taken its place.

Salvage Secondhand Shoppe, a vintage and repurposed clothing store that previously operated in the Downtown Mini Mall, held its grand opening Feb. 12 in Circa 77 Vintage’s former location just off the Square. With a focus on sustainability and community involvement, Salvage Secondhand offers found treasures from vintage clothing to home decor along with craft and repurposed items from other small businesses in North Texas.

Owner Juliana DiGennaro, a former fashion design student at the University of North Texas who had been operating Salvage as a booth in the Mini Mall, said she had been toying with the idea of opening her own shop in the future, but when the space at 225 W. Oak St. opened up, things came together quickly.

DiGennaro had taken a break from school amid COVID-19 since most of her classes were in person and said she was looking to do something more rewarding with her time. Though she tried taking Salvage online, her website didn’t generate much traffic, and with the success her booth had downtown, she knew she wanted a shop in the same area.

With the help of her fiance and family, DiGennaro transformed the space into her own, incorporating funky oranges and greens that celebrate the vintage aesthetic of the 1970s with the eco-conscious sensibilities of the 21st century.

DiGennaro’s interest in sustainable fashion took root a few years ago, when she began learning about the impacts of the fashion industry on the environment. She found a love for thrifting she wanted to share with others.

“I discovered the clothing had better quality, and it felt more my style to shop something that had been loved once, so I could give it a new purpose,” DiGennaro said.

Salvage’s focus on sustainability extends beyond just offering vintage pieces — the shop doesn’t offer plastic bags and, to encourage customers to make their shopping trip an eco-friendly one, offers customers a 10% discount anytime they bring back one of the reusable totes Salvage sells.

Inspired by her struggles with body positivity, DiGennaro said she also wanted to create an inclusive space to show others that shopping could be enjoyable at any size and on any budget.

“I used to hear from people all the time, saying, ‘I don't look cute,’ or ‘My clothes are not what I want them to be because I don't have money,’ and I also heard from people that they could find good stuff in a thrift store but it would take them forever, and I just kind of wanted to take that stress away from them,” DiGennaro said.

DiGennaro’s sister, Tessa — who has her own rack in Salvage focused on children’s vintage that was inspired by her son, Rory — said she was hesitant when Juliana first told her about her plans, but quickly came to embrace Juliana’s determination.

“I think my first reaction — because it was sort of like, ‘I'm going to not go to school right now and do this’ — as her older sister I was like, ‘Are you sure, you know? There's still a lot you can learn from that,’" Tess DiGennaro said. “But as soon as she started talking about pros and cons and just her vision for it, I honestly was just really proud of her because I feel like she knows what she wants to do, and she's determined to make it happen.”

Community is also an important part of Salvage. The shop has a space dedicated to showcasing the work of other local small-business owners, which DiGennaro said she hopes to rotate out monthly to give more up-and-coming artisans a boost.

Still Devoted, a resin and jewelry business that operates primarily online and in local pop-ups, is the first small business to partner with Salvage. With many of their own materials upcycled from a jewelry manufacturer’s liquidation, the owners say they are happy to share in Salvage’s mission.

“I know it’s important to [DiGennaro] to help us get a spotlight, and it means a lot to her since that’s how she kind of got started in the Mini Mall,” said Devin Gregg, who runs Still Devoted with her girlfriend, Tatum Stone. “We’re really excited to be working with another small business.”

DiGennaro said she, too, is eager to embrace the tight-knit community of artisans, makers and small-business owners in North Texas and has plans to also create a gallery wall to showcase local artists. While she’s thrilled to have her own space, DiGennaro said using it to support the community that nurtured her dreams is just as important as helping people find sustainable pieces they love.

“I don’t want to just be an average business and don’t want to be in it just for the money and it be just about me,” DiGennaro said. “I want to involve my community because that’s something I’m passionate about, and I think it’s important to not just live only for yourself.”