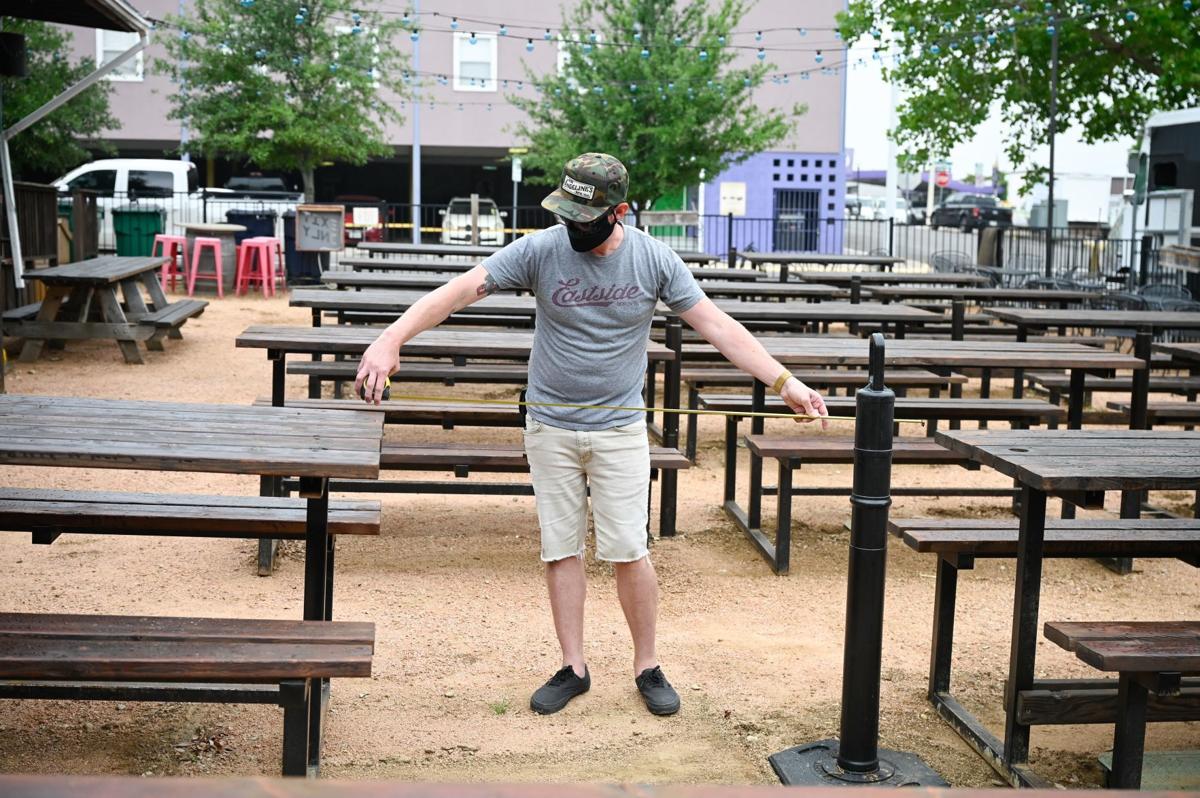 East Side Denton staff members prepare for reopening Thursday by moving tables and measuring how far they are apart in order for customers to maintain safe distances from each other. 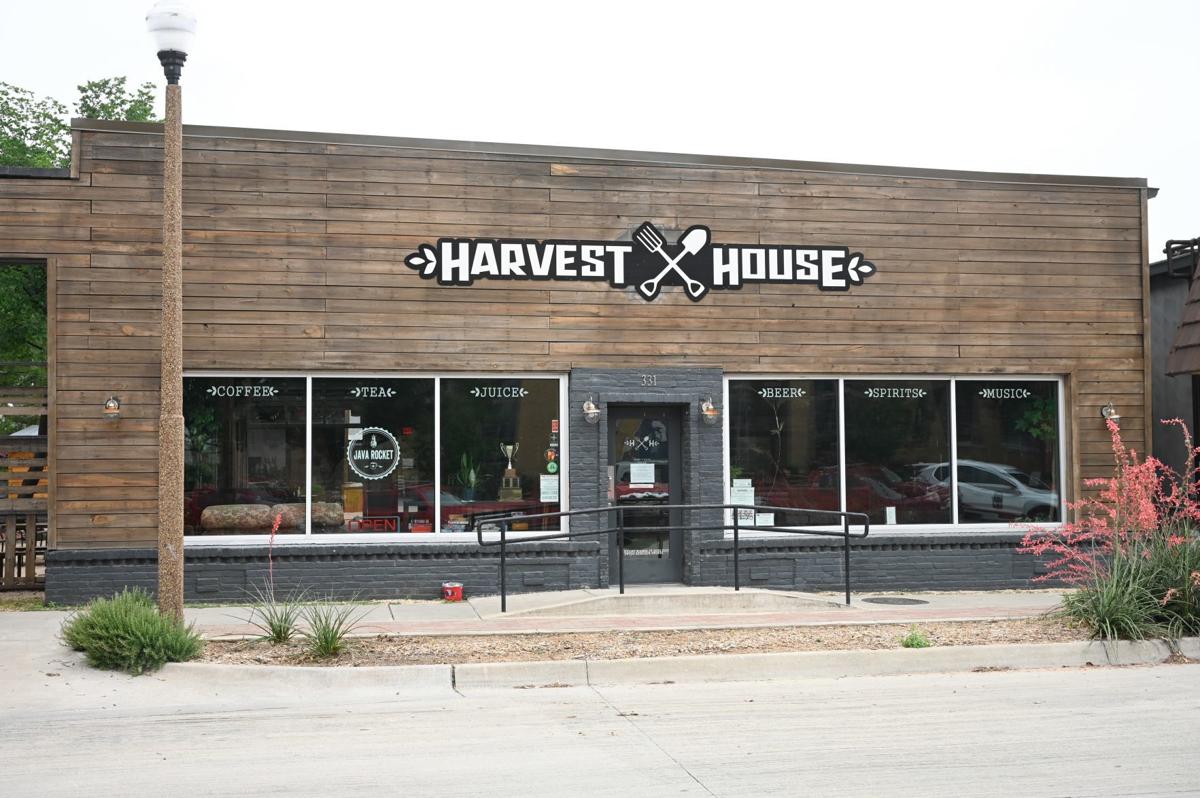 Harvest House remains closed for the time being, but has plans to reopen at a later date.

East Side Denton staff members prepare for reopening Thursday by moving tables and measuring how far they are apart in order for customers to maintain safe distances from each other.

Harvest House remains closed for the time being, but has plans to reopen at a later date.

For the first time in two months, Denton residents will be able to attend entertainment venues such as bars and bowling alleys, as the next round of commerce reopens statewide on Friday.

After being closed for an extended duration and without much word prior to Monday, some businesses are deciding against opening right now, citing last-minute refining.

At Harvest House, the bar and music venue will not reopen on Friday, instead holding off until final measures are in place, owner John Lenz said. Many of those measures, such as hours of operation and a date of reopening, have not been decided yet, but he said the bar might reopen next week.

Some aspects, though, will not immediately return upon reopening, he added.

“Live music will come back, but we do not have a timeline as to when,” Lenz said, adding that would be determined at a later date.

On Monday, Gov. Greg Abbott announced the next wave of businesses to reopen including bars, bowling alleys, bingo halls, simulcasting, skating rinks, rodeo and equestrian events, in addition to zoos, aquariums and natural caverns. While each business is limited to 25% of total occupancy, others, like restaurants, are authorized to reopen to 50%.

As part of the minimum health protocols of reopening, bars will be required to remove or block off bar stools, so customers are unable to sit nor order at the bar itself, according to the Governor’s Strike Force to Open Texas. In addition to disinfecting frequently touched surfaces and objects, individuals and groups must maintain proper social distancing of 6 feet minimum.

However, individuals 65 and older and those at greater risk of contracting the coronavirus are advised to stay at home as much as possible.

While face masks are recommended for employees of newly reopened businesses and customers, they are not explicitly required.

University Lanes Bowling Alley will reopen on Friday after an abrupt shutdown of nearly two months; however, capacity is limited, and for now, customers can only reserve hourly rates. During the lead-up to Friday’s reopening, additional measures to reduce the spread of coronavirus were taken, such as distributing hand sanitizer and cleaning house bowling balls, staff said.

Also, all interactive functions and exhibits — such as child play areas, interactive games and video arcades — are still closed under the state rules.

The move to further reopen the Texas economy comes during record totals of new coronavirus cases statewide and an increase of Denton County cases in the past two weeks. On Tuesday, Matt Richardson, director of Denton County Public Health, said cases have increased but that the overall positive rate has decreased by 2.7% over the past three weeks as testing increased.

“From May 4-18, Denton County has averaged just over 20 cases per day, so we are trending up slightly,” Richardson said to Denton County commissioners on Tuesday. “I would say that is good news, because of Texas and Denton County opening in the last few weeks, we are not seeing a big surge in cases. We wish it were going down, but no surge is encouraging.”

With the number of active cases throughout Denton County, community spread is a very real threat and still a significant concern for public health, said DCPH spokesperson Jennifer Rainey. Although commerce is hoping to rebound after two months of closures, some speed bumps are expected on the road to recovery.

As the economy reopens and contact exposure increases, health precautions are still recommended for the general public, Rainey added.

“We hope community members will choose to wear masks, sanitize and wash their hands frequently, and practice physically distancing to limit the spread of COVID-19,” she said.

For John Williams, owner of Eastside, Miss Angeline’s and Oak Street Drafthouse, a firm reopening date has not been decided upon yet, though he pointed toward June 1. The date is subject to change due to the need to finish renovations and retrain employees at his three bars to the new normal of “business as usual.” The decision, he noted, was safety-oriented.

“We are still wanting to start out slow and do not want to just jump in to where we were before,” Williams said, adding the goal is to keep staff and customers safe. “We have not decided on hours but will likely stick to the same as before.”

One of the challenges, he added, would be monitoring capacity of bars; however, a focal challenge could be informing customers of new guidelines such as not approaching the bar or other tables, he said.

He also is asking that the community remain considerate with the reopenings.

With commerce returning on the heels of an increase of cases and concerns of a second wave later this summer or in the fall, most are simply taking the return to normalcy in cautious stride.

“No one can predict the details of the future, but Harvest House will get through this we are all taking it one step at a time,” Lenz said.