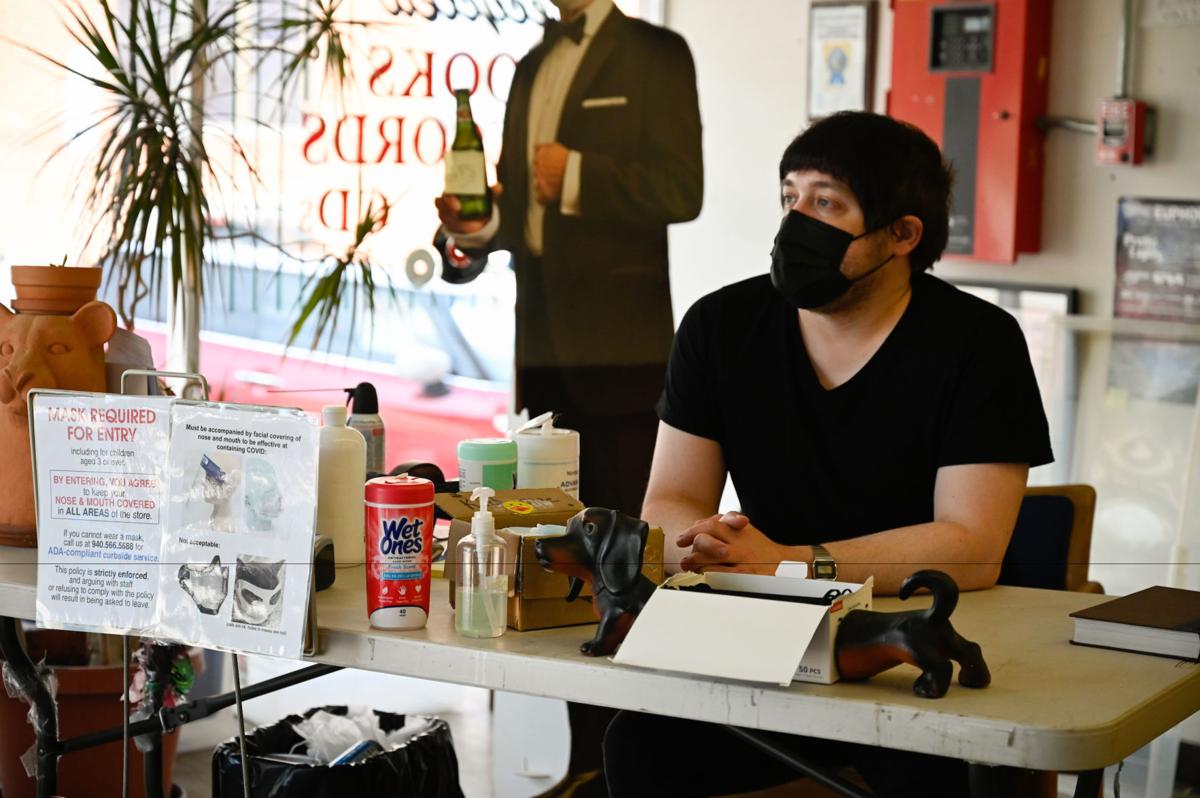 Employee Jason Uecker watches customers come into Recycled Books, Records & CDs on Saturday and makes sure they adhere to the store’s mask policy. 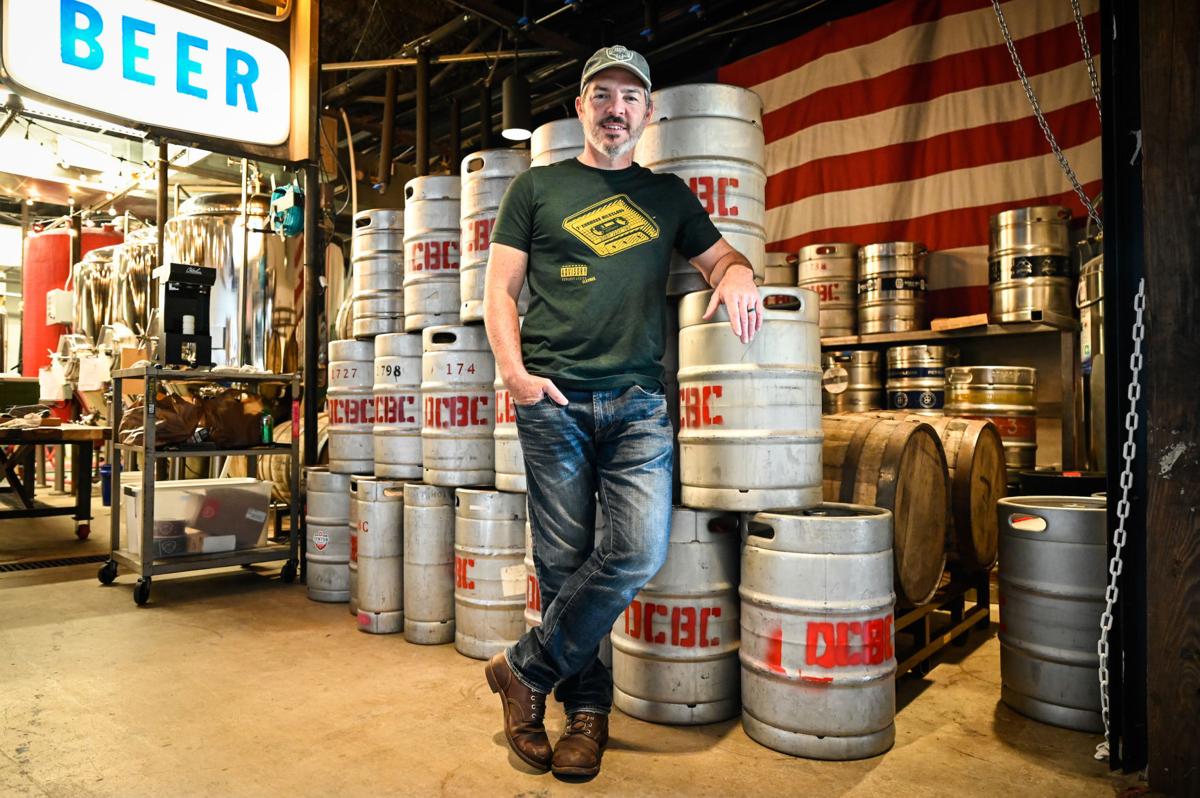 Denton County Brewing Co. owner Seth Morgan said following the CDC’s new guidelines his brewery has moved to simply encouraging masks as it’s not practical to try and pinpoint which customers are or aren’t vaccinated.

Employee Jason Uecker watches customers come into Recycled Books, Records & CDs on Saturday and makes sure they adhere to the store’s mask policy.

Denton County Brewing Co. owner Seth Morgan said following the CDC’s new guidelines his brewery has moved to simply encouraging masks as it’s not practical to try and pinpoint which customers are or aren’t vaccinated.

Thursday’s Centers for Disease Control and Prevention announcement that fully vaccinated people no longer need to wear masks or socially distance in most situations forced quick adaptation from local business owners, some of whom said they’re frustrated by the agency’s abrupt update.

While the new CDC guidelines lay out that anyone who’s fully vaccinated is safe to be without their masks when not traveling via buses, trains, planes or any other public transportation, businesses can still make their own decisions on requirements. For many of those businesses, such as downtown Denton’s Recycled Books, Records & CDs, the abruptness of those new guidelines has been frustrating.

“We kind of got screwed by the CDC,” said Recycled owner Don Foster, whose store is still enforcing a full mask requirement. “You would expect some kind of advance warning. It’s difficult.”

A major problem with the new guidelines, Foster said, is that it isn’t feasible for a business to verify each customer’s vaccination status. Recycled could adjust its mask policy moving forward, but he said the store is trying to strike a balance between customer safety and enjoyment.

“At some point, we’re going to have to [change the policy],” Foster said. “Our problem is we have so many customers, especially on the weekend. We want everyone to be safe, but we want them to be happy.”

Chestnut Tree owner Suzanne Johnson said that because she’s cited the CDC’s guidance in the past, her bistro is choosing to keep staff masked but roll with the new guidelines for customers, which requires a level of trust in their honesty.

“I trust they (the CDC) have the research and science to back it up, so I have to stay that route,” Johnson said. “We’re not going to ask people. We’ve given them what we’ve given them.”

Bars and other alcohol-based businesses like Denton County Brewing Company have been at the forefront of the pandemic spotlight since they were targeted by Gov. Greg Abbott in shutdowns last year, pinpointing them as particularly high-risk for COVID-19 transmission. DCBC owner Seth Morgan said he actually learned of the new guidelines when a customer showed them to him on their phone.

“The way they rolled that out was a surprise,” Morgan said. “We still have the signs, but it’s become much more difficult to enforce.”

Morgan said his brewery has moved to more of a mask encouragement in the wake of those guidelines because it’s not practical to sort through who is and isn’t vaccinated. Some bar owners are sticking with their old requirements, including John Williams of East Side Denton, Oak St. Drafthouse and Miss Angeline’s.

“We’ll probably switch it over in the next two-to-four weeks, maybe going to a mask recommendation,” Williams said. “As the numbers keep going down we’ll make changes, but there’s nothing set in stone yet.”

Williams said his bars are largely unfazed by the CDC announcement. The most frustrating part of mask usage, he said, has been treatment of employees.

“It’s frustrating with your employees having to do work and getting yelled at for nothing,” Williams said.

The Bearded Monk owner Ben Esely sees the guidelines through a different lens, as he’s planning to reopen his beer shop’s interior at the end of the month with all staff fully vaccinated. Despite the guideline changes, Bearded Monk will have a full mask requirement for anyone inside and around the patio.

Esely has been outspoken in the past about the state’s treatment of bars, saying he believes they’ve been scapegoated and unfairly targeted by officials. Even now, with virus cases greatly improved from the peak of their transmission, that fear remains.

“I’m worried that if they don’t get better and we do potentially see a spike, Texas is going to blame the bars again,” Esely said. “We’re going to make sure we’re still as safe as we possibly can be.”

Ultimately, Esely said he’s looking forward to a complete return to normalcy, whenever it does come.

“I can’t wait until I can have people sit at the bar again,” Esely said. “I miss when four or five different strangers came, sat at the physical bar and became friends. That will mean normal is back when I can do that again.”