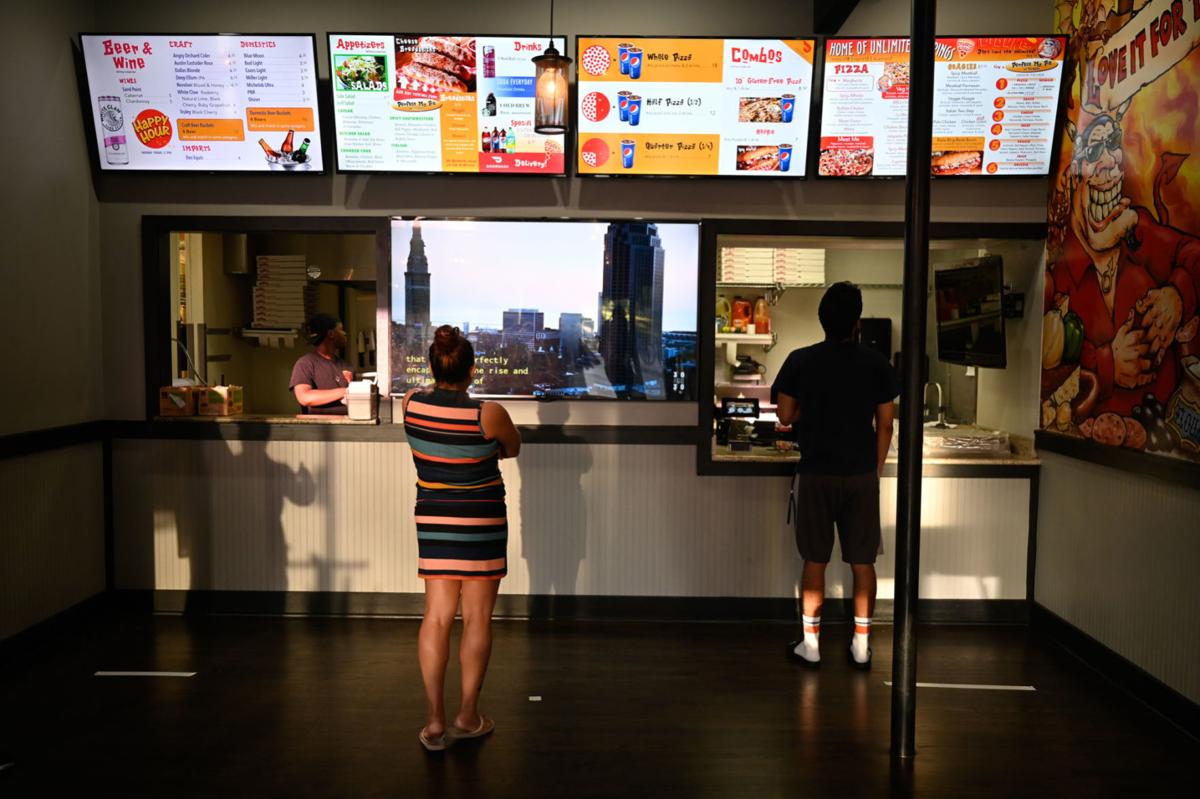 Customers wait to pick up their pizza orders at Crooked Crust on Friday. The company says sales have dropped, but the pizzeria benefited because it already had an exterior walk-up window. 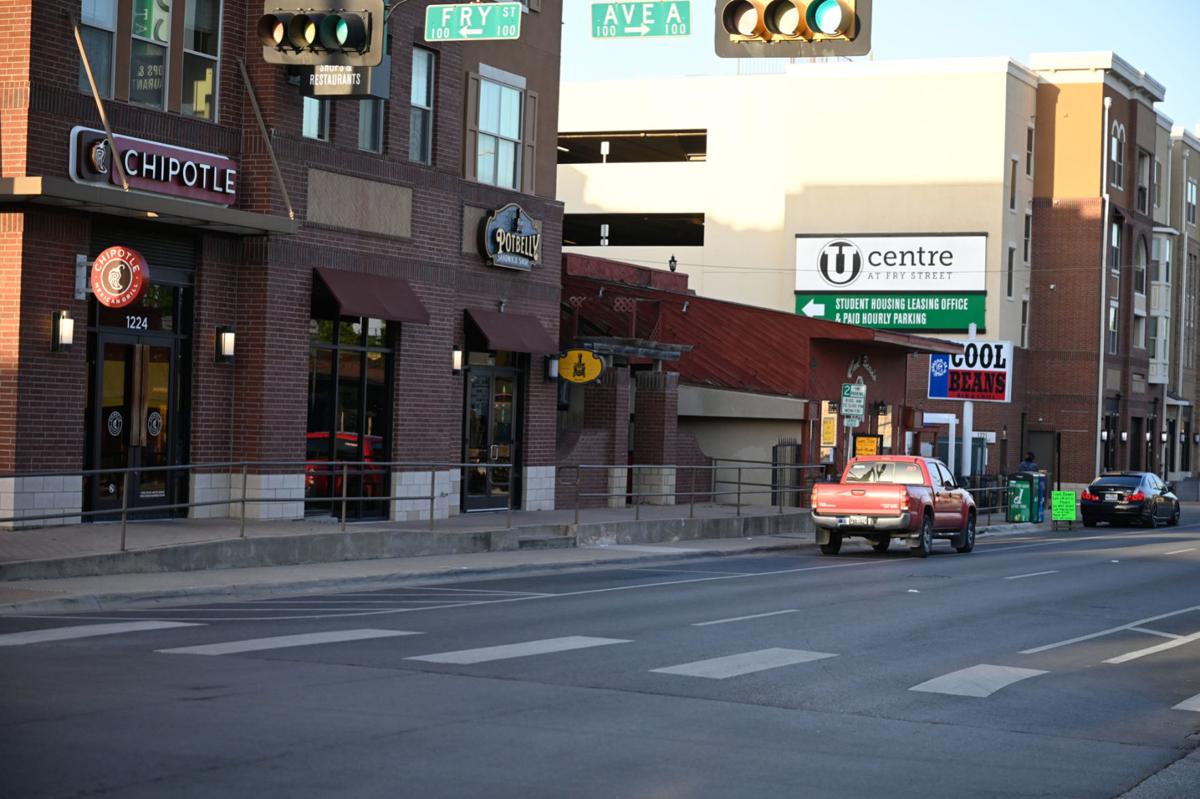 Business in the Fry Street area has been affected by stay-at-home orders and the University of North Texas’ shift to online classes during the coronavirus pandemic. 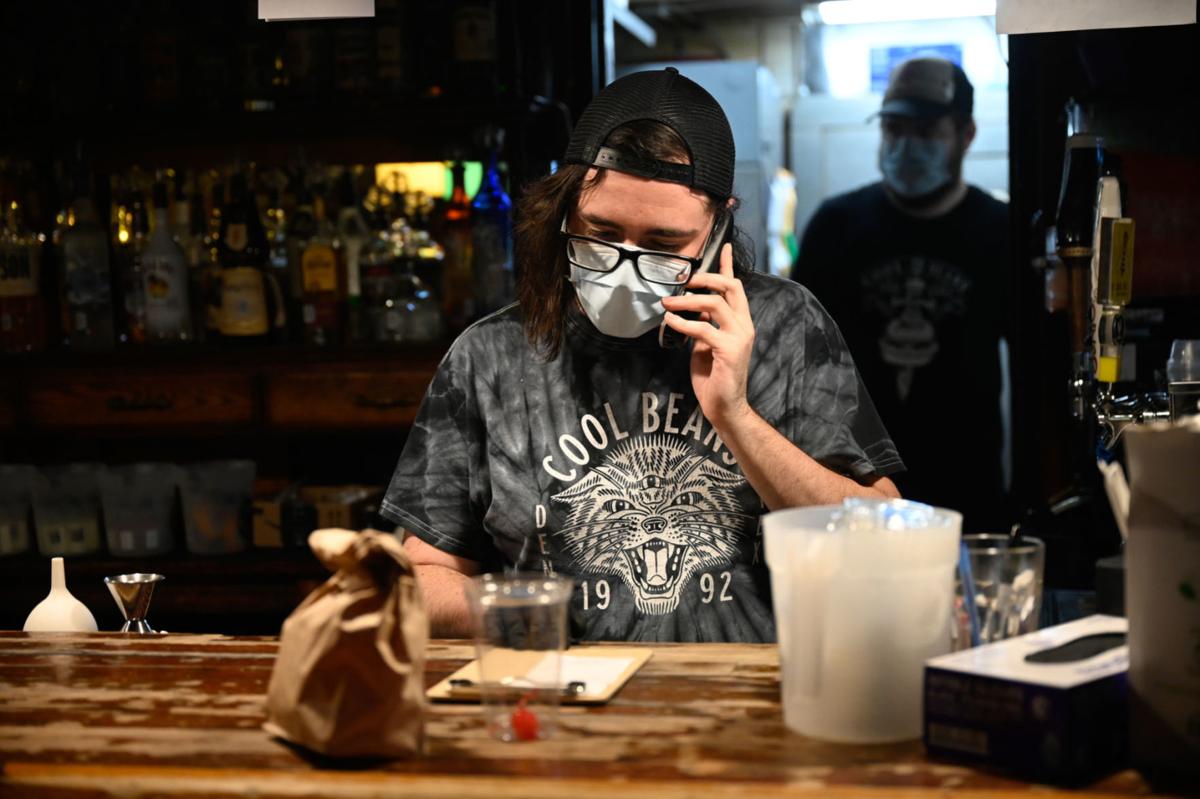 Employee Jackson Boyd takes a customer's order over the phone at Cool Beans on Friday. The bar and grill is limited to takeout orders only. 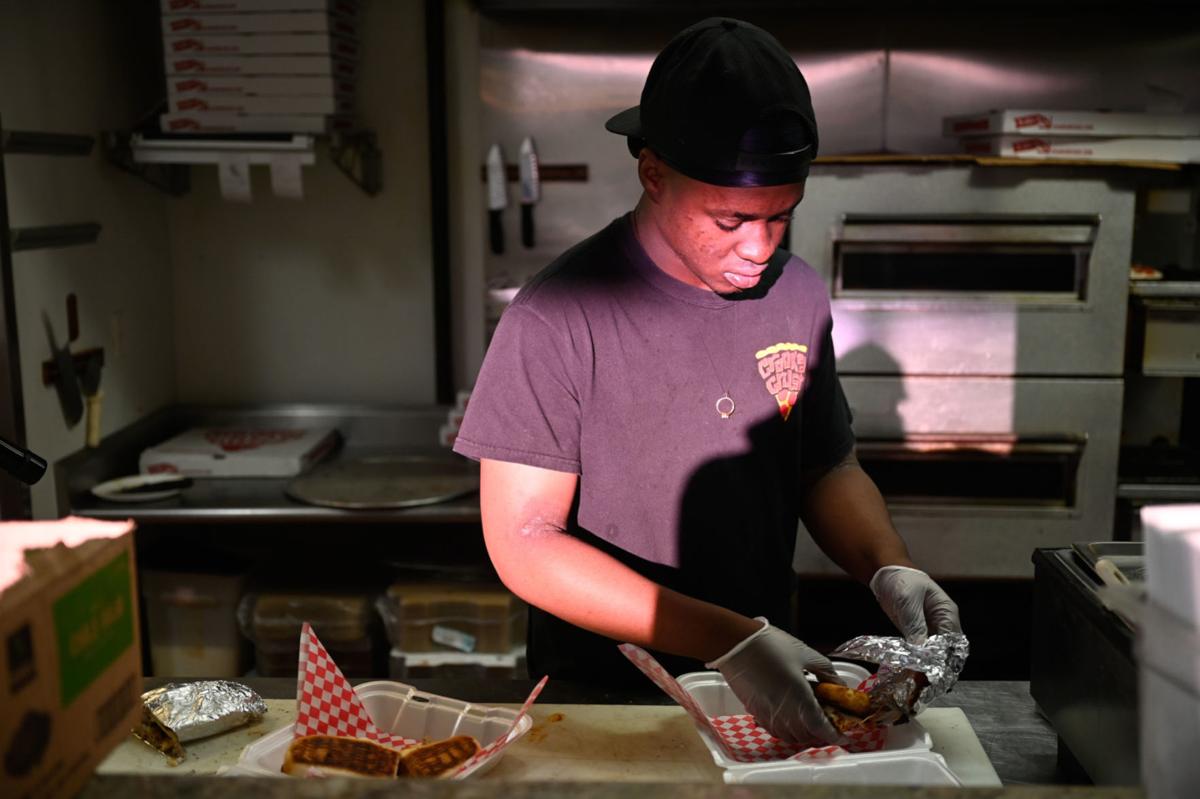 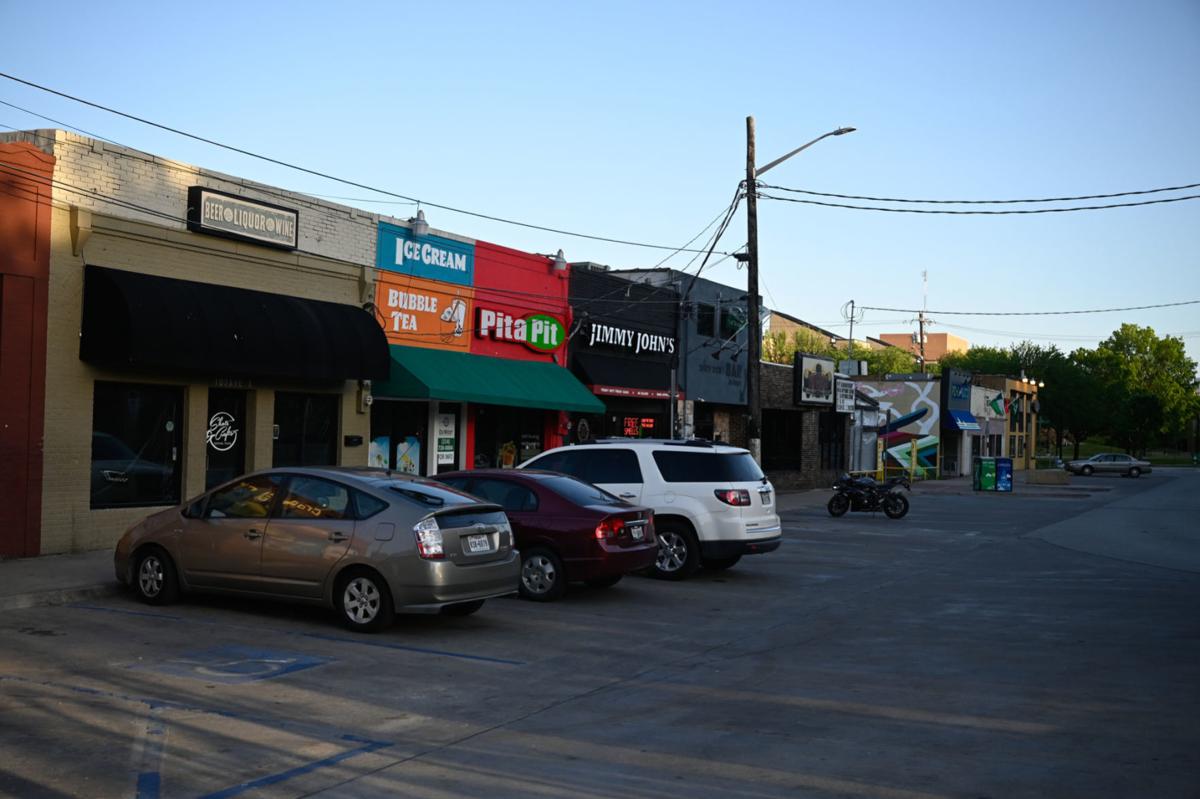 Business has been quieter than usual on Avenue A, Fry Street and Hickory Street near the UNT campus.

Customers wait to pick up their pizza orders at Crooked Crust on Friday. The company says sales have dropped, but the pizzeria benefited because it already had an exterior walk-up window.

Business in the Fry Street area has been affected by stay-at-home orders and the University of North Texas’ shift to online classes during the coronavirus pandemic.

Employee Jackson Boyd takes a customer's order over the phone at Cool Beans on Friday. The bar and grill is limited to takeout orders only.

Business has been quieter than usual on Avenue A, Fry Street and Hickory Street near the UNT campus.

For businesses in the Fry Street area, the typically quiet week of spring break has stretched into an indefinite lull as few college students remain on campus and many Denton residents are staying home because of COVID-19.

Restaurants and bars near the University of North Texas campus face the task of adapting to pandemic limitations imposed by the county and state. With most bars closed or operating under strict to-go orders like restaurants, the idea of business as usual has become old and outdated.

Becky Lovell, general manager of Cool Beans Bar & Grill, said the lull in traffic, the pandemic and subsequent restrictions led the restaurant to temporarily close its doors, after 28 years in business. When bars were ordered to close in late March, she said all 23 members of the staff were furloughed.

Then, she said, a series of events — from not being offered relief on their rent to restaurants being authorized to sell alcohol with to-go orders — led to a gradual reopening. Since then, six of Cool Beans’ employees have been rehired, and the bar and grill is adjusting the new normal of takeout sales only.

“We created a walk-up window situation, where in addition to allowing people to call in their orders, we’re also allowing customers to place walk-up orders,” Lovell said. “On nice days, we’ve seen quite a bit of people walking by and stopping and getting a drink or some food. Some people are actually opting for walk-up, I think, because of the human interaction.”

For Lovell, the silver lining was being approved for the Small Business Administration’s Paycheck Protection Program. With the disbursements scheduled to begin this coming week, she said the hope is that more employees can slowly be rehired. The rehired employees would focus on expanding delivery for Cool Beans, rather than using third-party services.

“I do think in-house delivery will give me an opportunity to rehire some of my employees,” Lovell said, adding that the concept would include a certain mile radius and a small fee that would go directly to the employee. “We opted out of any delivery services because they were asking for way too high of a percentage per ticket, and we would not make any money.”

Rogers said downtown Denton and the Fry Street area produce a significant amount of the city’s mixed beverage tax. While only $661,823 was collected, she said the two areas produce “a large percentage of a low overall revenue.”

For most Fry Street businesses, the sales downturn began not with the pandemic but about a week before the first local case of the novel coronavirus was identified — when students were away for spring break.

Most of the bars — including Tom’s Daiquiri and Lucky Lou’s — have temporarily closed their doors, and the restaurants that remain open are operating with skeleton crews.

“After careful consideration, Lucky Lou’s decided to close its doors on Monday, March 16,” said Jazz Binning, the bar’s general manager. “This is an unprecedented situation and our focus now and moving forward is when we are able to open our doors, what new procedures will we adopt to keep our customers safe while also providing the same experience.”

Binning said both management and employees are anticipating more information on a phased reopening of the statewide economy during Gov. Greg Abbott’s press conference on Monday. The biggest concern, Binning said, is how Lucky Lou’s can maintain adequate social distancing guidelines in its current setting — with a total capacity of over 300 people.

At late-night pizza parlor Crooked Crust, hours have been adjusted as sales dropped by about 40%. But because it already had an exterior walk-up window and additional sales via third-party apps, such as Uber Eats, the pizzeria has fared OK, said Gage Anderle, vice president of Crooked Crust.

Meanwhile, Ashlie Pracht, general manager of Jimmy John’s location on Avenue A, said sales have fallen nearly 75%, but the sandwich shop hasn’t had to furlough any employees. However, with deliveries down, the shop has averaged about one delivery driver a day — instead of the typical six or seven.

Some nearby eateries, including Aura Coffee and Potbelly Sandwich Shop, have temporarily closed up shop.

For Kim McKibben, owner of Aura Coffee, there’s usually a lull in customers during spring break. However, springtime has been a period that carries her business through the typical summer downturn and into the fall, when students return to campus. When she realized UNT wasn’t going to reopen, she said the decision to close was made.

“We rely on the student population to make our sales,” McKibben said. “I typically make sales in the fall and spring that carries [Aura Coffee] through the summer — that’s our safety net. We tried to stay open for takeout, but it was not enough.”

With concerns about whether on-campus classes would return this year, she said all 10 of her employees were furloughed.

McKibben said she has applied for SBA’s disaster loan and Paycheck Protection programs, as well as a grant offered by Texas Woman’s University. She hasn’t received word of any disbursements yet.

While many businesses are faced with bottom-line adjustments, she noted that the saving grace for her shop is that she owns her building — which means she doesn’t have to persuade a landlord to offer relief during the pandemic. Although not every business has that benefit, she said she believes commerce can weather the storm.

But without a known extent to the fallout and with lingering questions about on-campus classes, the endgame is unknown.

“The only thing that is certain [right now] is uncertainty,” McKibben said. “When you look at what has happened with the universities and with students and workers, we just don’t know at this point. We’ll see what happens. It’s not my intent to close or to get out at this point, but hopefully we can work our way through this.”