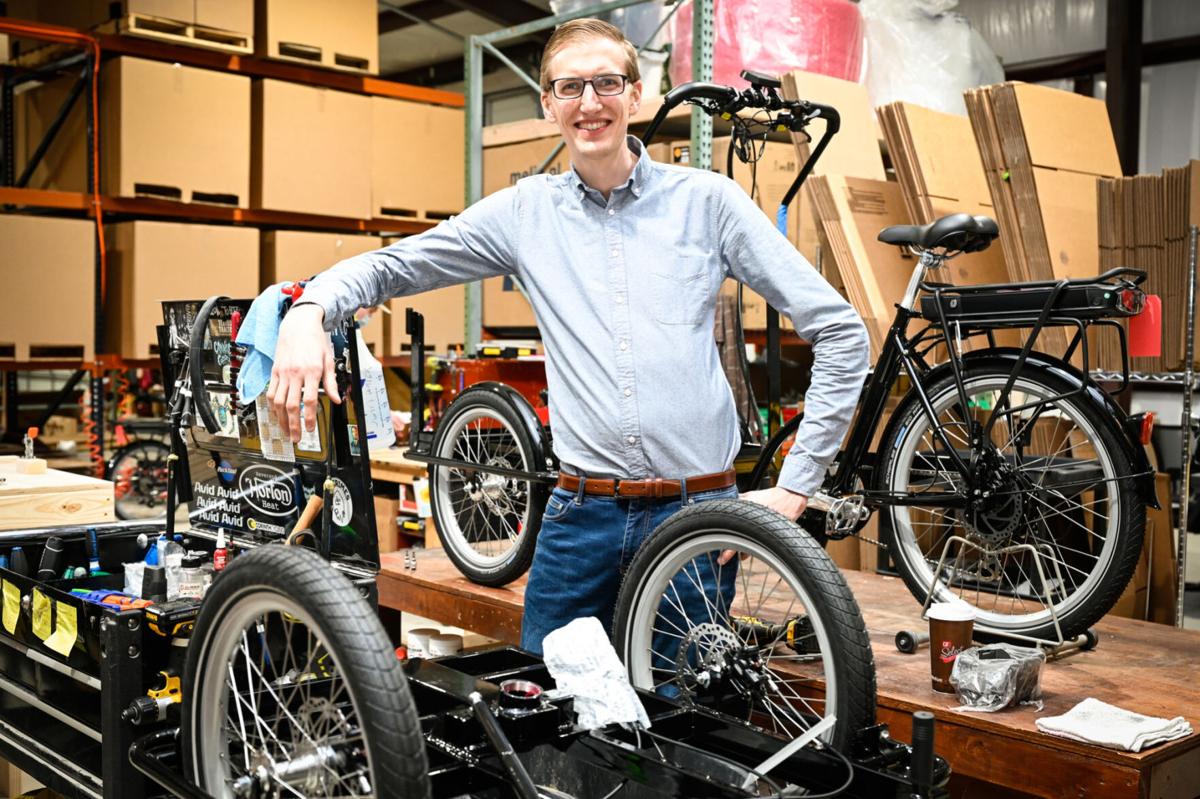 Bunch Bikes CEO Aaron Powell will give a pitch about his Denton-based cargo bike business on Friday’s episode of “Shark Tank.” A former employee thought the business would be perfect for the reality TV show. 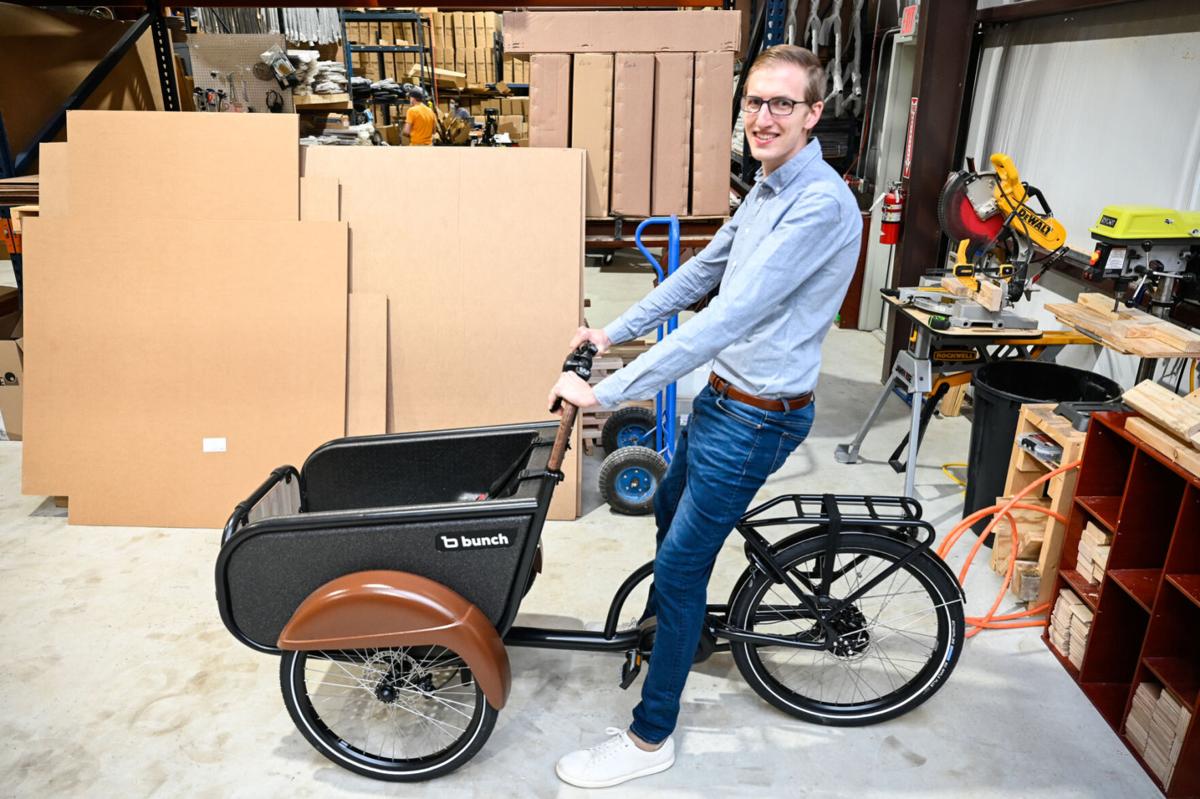 Bunch Bikes CEO Aaron Powell will give a pitch about his Denton-based cargo bike business on Friday’s episode of “Shark Tank.” A former employee thought the business would be perfect for the reality TV show.

Aaron Powell has always had a love of bicycles. When he and his family came back from a trip to Sweden a few years ago, that love had intensified and with it, a desire to continue biking with his children, but he couldn’t find the family cargo bikes that were popular abroad.

So he decided to make his own.

Three years later, Powell’s company, Bunch Bikes, could become a household name as his vision for revolutionizing family biking in the U.S. is presented on a national stage. Viewers will get to hear Powell’s pitch for his Denton-based business on the ABC prime-time reality show Shark Tank on Friday.

Powell, a Houston native who came to Denton to study music education at the University of North Texas in 2006 and never left, opened family cargo bike shop Bunch Bikes in 2017. He had long been a cycler, often biking around 10 miles down the A-train Rail Trail to work daily when he was a teacher in Shady Shores. He knew he wanted biking to remain a part of his daily life, and when his family spent the summer in Malmo, Sweden, in 2016, he saw a bicycle that would make that possible.

“I just saw a bike, similar to what we sell now there, and I was like, ‘Whoa, that is the coolest thing I’ve ever seen — that is exactly what I need to continue this bike lifestyle with my children and my family,’” Powell said. “I wanted to come home and buy one, but there wasn’t anybody in the U.S. really making or selling them.”

Though he wasn’t sure if many people would share his desire to have something like a cargo bike, spectators showed immediate interest when he began riding the prototype around his neighborhood.

“I didn’t even get off my street before a neighbor wants to stop and talk to me about the bike, even though I’ve lived there eight years and my neighbors never talked to me before,” Powell said. “I go to downtown Denton, and people are taking pictures of it; everyone wants to know more about it.”

That interest gave him the courage to move forward with the business, and from the beginning, it began to pay off. Their first shipment of 40 bikes all sold out before Bunch Bikes received them in November 2017, with customers paying months in advance to have bikes made.

There were a few people in the U.S. dabbling in cargo bikes when Powell’s shop opened — a guy in his garage putting them together and a small company in Portland, Oregon, that went out of business around the same time — and a few more have cropped up since, but Bunch Bikes is the largest in the U.S., Powell said.

Bunch Bikes’ front-load cargo bicycles come in a range of styles and can seat anywhere from one or two pets to up to six children. The company has dealers and ambassadors across the country in addition to its online store and has been trying to catch up with pent-up demand since opening. With COVID-19 prompting many to spend more time outdoors and straining the supply chain for parts, that demand has only increased.

The bikes also have unique commercial applications, said Nic Bagherpour, who oversees customer experience and commercial sales at Bunch Bikes. The Colony Beverage Co. recently purchased a few cargo bikes to drive around the 400-acre Grandscape mixed-use development in The Colony, allowing them to easily restock on-site kiosks and sell beer and wine to shoppers out of the bicycles.

Shark Tank investor Robert Herjavec even purchased a Bunch Bike model independent of Powell’s experience on the show, and Powell said other celebrities are customers as well. But Powell said he wasn’t thinking of taking his idea on Shark Tank — a show he wasn’t very familiar with at the time — until a then-employee convinced him it would be a good fit.

“A former employee of mine, Juli, was the world’s biggest Shark Tank fan and was always bugging me like, ‘Hey, you’d be perfect on Shark Tank,’ and I was like, ‘I don’t even know how that works,’” Powell said. “But she just bugged me enough until eventually I filled out the application, and several months later, I get the casting call.”

Powell made an audition video, with him and his children riding a cargo bike around Denton, and was eventually chosen to go to Las Vegas to present to the show’s celebrity investors. He practiced for months last summer, memorizing sales figures and other data he might be asked to recall from memory during filming.

“It’s about as real as reality TV gets — they shoot it all in one long cut, and there’s no going back and doing it over,” Powell said. “You have like a two-minute prepared pitch, and then after that, it’s all improv; they’re shouting questions, and you’re trying to manage answering questions while knowing you’re doing a sales pitch to America at the same time.”

Though Powell can’t give too much away about his time on the set, he said the experience was one of a kind.

“I watched almost every episode to understand all the questions they might ask so you really get to know these personalities, and it’s just surreal seeing them there in person, and they’re just regular people asking you questions,” Powell said.

Regardless of whether Bunch Bikes got a deal with an investor or not, the shop is gearing up for an influx of interest after the national exposure, bringing on extra staff to help deal with any increase in orders on top of the company’s busiest season. As for Powell, he’s planning to watch the episode with his family and looking forward to seeing Denton in the spotlight.

“We don’t know what to anticipate at the end of this week, who’s going to write in, who’s going to call [or] what kind of deals we might have. My family had to sacrifice a bit of Dad’s time as he prepared and got ready for Shark Tank, and my kids, you know, they’ve never watched it, they don’t even really know what it is — I just talked about Shark Tank, they could be thinking actual sharks,” Powell said, laughing. “I was out there onstage alone, and I did bring my family with me in spirit; I had a poster printed up of my wife and kids on the bike and had it there on the side, so my kids will probably just be excited to see themselves on there.”

Season 12, Episode 19 of Shark Tank, which features Bunch Bikes, premieres at 7 p.m. Friday on ABC (WFAA-TV, Channel 8 in the Dallas-Forth Worth area).