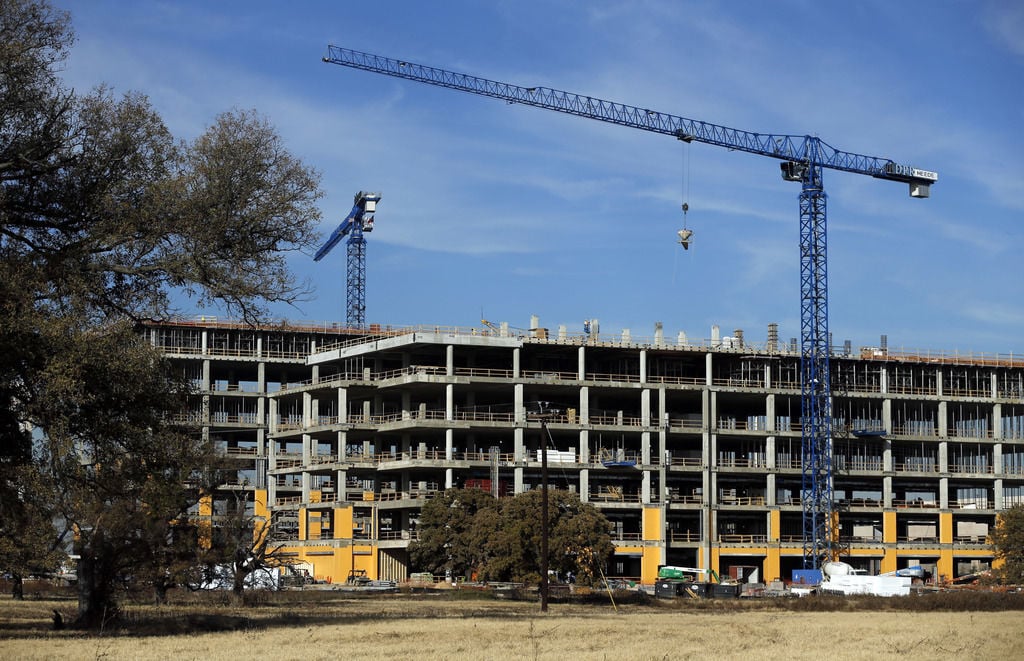 Construction of the financial services firm Charles Schwab & Co.’s new corporate campus continues last week in Westlake. The 70-acre site is located near the intersection of state highways 114 and 170. 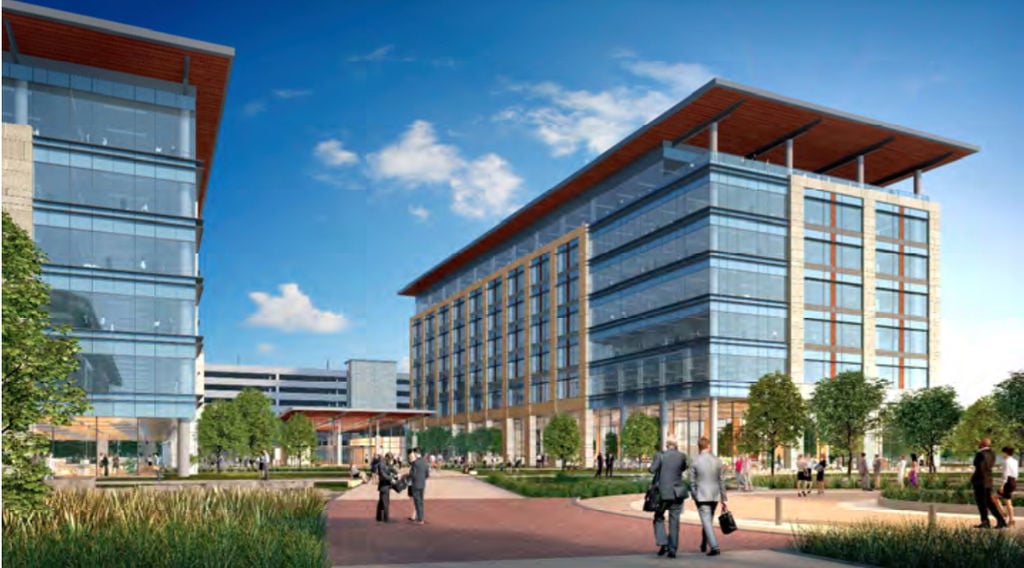 A digital rendering from 2018 shows part of Charles Schwab’s plans to double the size of its new Westlake regional office campus.

Construction of the financial services firm Charles Schwab & Co.’s new corporate campus continues last week in Westlake. The 70-acre site is located near the intersection of state highways 114 and 170.

A digital rendering from 2018 shows part of Charles Schwab’s plans to double the size of its new Westlake regional office campus.

Schwab said clients of both companies should benefit from the mega-financial merger of the two companies, which built themselves around the idea of extending investment opportunities to clients beyond Wall Street.

The company said it would relocate the company’s headquarters to the Westlake campus “eventually,” adding that the integration of the two firms could take 12 to 36 months. Schwab and TD Ameritrade expect the deal, which will be subject to regulatory approval, to close in the second half of 2020.

The town of Westlake sits on the border of Denton and Tarrant counties near Trophy Club and Roanoke.

“Together, we share a passion for breaking down barriers for investors and advisers through a combination of low cost, great service and technology,” Schwab president and CEO Walt Bettinger said in a statement. “With this transaction, we will capitalize on the unique opportunity to build a firm with the soul of a challenger and the resources of a large financial services institution that will be uniquely positioned to serve the investment, trading and wealth management needs of investors across every phase of their financial journeys.”

The company touted the benefits of North Texas’ location in the U.S. and said it would “take advantage of the central location of the new Schwab campus to serve as the hub of a network of Schwab branches and operations.”

The acquisition would create a combined financial services firm with around 24 million clients and almost $5 trillion in assets. Schwab touts that the merger will create an 18-20% cost savings, but Bloomberg analysis estimates that savings could take years to achieve.

“In a low, or no fees world, and one where interest rates are low and efficiencies gained from using sophisticated technologies are high, the pressure will be on other financial services rivals to try to keep up, or to gain further scale themselves,” Hamrick said in a statement.

The town of Westlake told The Dallas Morning News it had not been in touch with Charles Schwab or TD Ameritrade about the potential headquarters relocation. It said it was also “not aware” of any conversations between the companies and elected officials.

Westlake Deputy Town Manager Noah Simon said Schwab’s announcement “solidifies to folks that Westlake is sort of the financial hub of the metroplex and, really, of the country. And we welcome them to our community and hope others look at Westlake as a place to do business in the future.”

Fidelity Investments and Deloitte also have a presence in Westlake with thousands of workers in the Dallas-Fort Worth area.

Schwab’s headquarters announcement falls in line with recent trends in the management of financial services firms. In 2016, Forbes chronicled how firms were moving operations away from traditional city centers such as New York, Los Angeles and Boston for more centrally located Southern cities where salaries went further.

Schwab isn’t pulling out of California altogether, however. It will continue to invest in the San Francisco community where the company was founded, and will likely move some employees to Westlake while still maintaining a presence in the Bay Area, according to the release.

The combined companies’ eventual Westlake headquarters is located at the corner of state Highways 170 and 114. It covers 500,000 square feet on more than 70 acres of land that Schwab purchased in June of 2016 and is just 20 minutes from DFW International Airport.

In December, Schwab is slated to begin work on Phase 2 of the campus development, which would double its square footage and expand its employee capacity to accommodate roughly 6,000 employees. The company started doing business in Dallas in 1977 and currently has around 1,600 employees in the DFW area. It has another 4,200 employees between its campuses in Austin and El Paso.

“I’m not sure the broader market really recognizes what is happening in that corridor,” Berry said. “If you take Schwab, TD Ameritrade plus Fidelity, you’re close to 12,000 financial services jobs.”

Berry said Schwab still has plenty of room to grow at the Circle T.

“Their total site is roughly 75 acres,” he said. “With phase two under construction today, they will have roughly a third of the site left to develop. There will be 1.2 million square feet when they finish phase two.”

Schwab has received money from the Texas Enterprise Fund for all three of its recent expansions in El Paso, Austin and Westlake. The fund is a tool Texas leaders can levy to recruit companies to invest capital resources in the state. The Westlake campus specifically is eligible to receive $6 million in funding — which has to be disbursed — and is expected to account for a $100 million capital investment on behalf of the company, according to state records.

TD Ameritrade established a 78-acre, $123 million campus in the affluent North Texas suburb of Southlake in 2018. It became home to the brokerage firm’s employees who previously worked at its Fort Worth site.