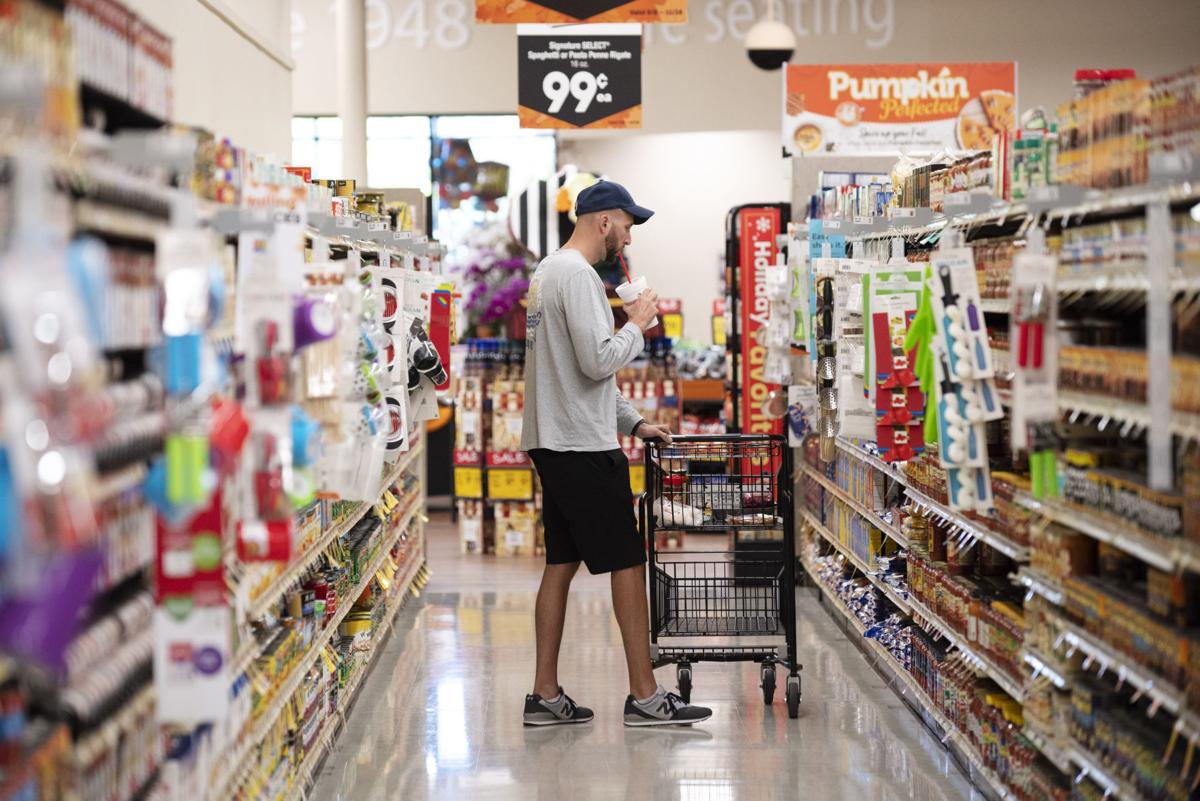 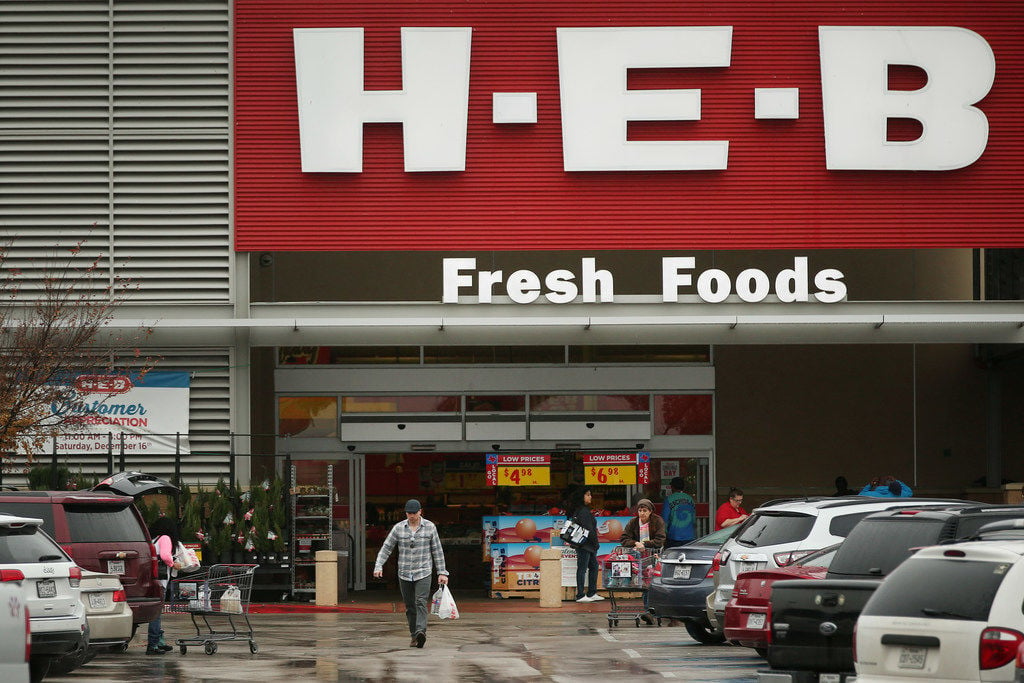 H-E-B’s store in Waxahachie is the closest one to Dallas until next year, when new locations will open in Frisco and Plano.

H-E-B’s store in Waxahachie is the closest one to Dallas until next year, when new locations will open in Frisco and Plano.

DALLAS — As H-E-B plans its entry into Dallas-Fort Worth late next year, Walmart, its Sam’s Club and Kroger now control more than half of the DFW grocery market.

The combined market share of No. 1 Walmart and No. 5 Sam’s jumped to 34.2% this year vs. 29.9% in 2019 before the pandemic started. The numbers were compiled by Chain Store Guide and are for groceries only, not pharmacy or general merchandise sales.

For decades, grocers built new stores seemingly in the middle of nowhere but ahead of the region’s multiplying rooftops.

Now San Antonio-based H-E-B is making its entrance at a time when there’s been very little new store construction. H-E-B has bought prime acreage throughout DFW over the years, including a Denton property it’s owned for years and a recent purchase in Forney.

“It’s naive to think that each grocer will be able to maintain market share when another major grocer enters the market,” said Mark Newman, JLL’s managing director in Dallas. “The dearth of new store construction can’t continue forever.”

Walmart’s huge two-year leap illustrates that the largest U.S. retailer gained new customers as the number of households nationwide that listed supercenters as their primary stores for groceries rose to a new peak during the pandemic, according to the Food Marketing Institute’s recently released annual report.

While DFW residents followed such national patterns, including shifting more of their grocery shopping online, the region’s growth is why H-E-B, the state’s largest grocer, and all the big national food retailers want to be here.

Dallas-Fort Worth’s hyper-competitive grocery market grew to $23.5 billion, or by more than 13%, since before the pandemic started, not only as more meals were cooked at home but also because of its ongoing population gains.

DFW led the nation in 2020 population growth, adding almost 120,000 residents, including 75,000 who moved in, according to the latest data from the U.S. Census. During the past five years, DFW’s population has grown by more than 650,000.

The last time Walmart opened new stores in North Texas was in 2018 in Fort Worth and Prosper. McKinney is the newest for No. 2-ranked Kroger, and that store opened in 2019.

It’s also been a while since a new supermarket brand moved into what experts call the most competitive grocery market in the U.S.

Two dozen national, regional, ethnic and specialty grocery chains already operate here. Still, H-E-B will attract shoppers from throughout the DFW region to its big new stores in Frisco and Plano this time next year and in McKinney in early 2023.

“Supermarkets have not been keeping up with the growth,” Newman said.

That doesn’t mean they aren’t thinking about it. Stores are protective about their plans now that H-E-B is moving in.

“Operating in DFW means that you are operating in the No. 1 fastest-growing market in the U.S. — and you can’t operate in a market like that and not have plans to look for opportunities to open new locations,” said Wes Jackson, president of Albertsons Cos.’ southern division, which includes Albertsons and Tom Thumb stores.

Grocery retailers have been busy adjusting to the unprecedented demand that arrived in full force with the pandemic. Stores were remodeled, curbside spots were added and partnerships were forged with delivery services. Their own employees also had to be retrained.

Out-of-stock items are an issue, but the lack of raw materials is also affecting new store openings and retailers’ ability to get key items such as refrigerated equipment, said David McGlinchey, chief format officer at Sprouts Farmers Market. A new store opening in Grand Prairie has been delayed until next year. The retailer has 21 stores here now and could go up to 30, he said. Its new store format is smaller, about 23,000 square feet vs. 30,000 square feet.

In addition to Walmart and Sam’s Club, only Kroger and Sprouts gained market share from the prior year.

Sprouts has hired a new director of real estate just for Texas and Oklahoma, McGlinchey said. “Dallas-Fort Worth is a good market for the customers we try to serve,” he said, defining them as people who follow a healthy lifestyle and like to explore new foods.

Tom Thumb opened a store last year near Deep Ellum and in Uptown Dallas in 2019. There are opportunities to fill in older neighborhoods along with the suburban growth areas, Jackson said.

Tom Thumb ranks No. 4 with a 7.4% share of the market, according to Chain Store Guide, and posted a slight decline in the past year. Albertsons, which owns Tom Thumb, had a 3.8% share, same as the previous year, and it ranks No. 7.

In the Dallas area, Albertsons and Tom Thumb remodeled 13 stores in the past year and added online grocery delivery and drive-up services to 27 locations. Now 88% of its DFW stores are able to fill online orders.

Kroger and Walmart were the first to introduce curbside pickup in the region and already had a big capacity for it when the pandemic hit.

Big, expensive automated fulfillment projects are in the works by Kroger in southern Dallas and Walmart in Lancaster to strengthen online capacities.

Kroger’s digital sales in DFW have more than doubled since 2019. Since the pandemic started, customer purchasing behaviors are trending with COVID-19 activity, Shoemaker said. In the second quarter, customers visited stores more frequently, and many shifted from online to in store.

“Towards the end of the quarter, as COVID-19 cases increased, many of our customers reverted back to our digital solutions,” he said. “This further demonstrates the strength of our seamless ecosystem.”

Kroger is building a 350,000-square-foot fulfillment center in southern Dallas with British technology company Ocado that’s scheduled to be completed in early 2022 and will create 400 jobs. It’s one of the first of 20 Kroger plans to build across the U.S.

“This transformative fulfillment center will create local jobs and accelerate Kroger’s ability to expand our products and services to a larger footprint, providing customers with anything, anytime, anywhere,” Shoemaker said.

U.S. online grocery spending, which had been minuscule at under 3%, ballooned to 10% of spending during the pandemic. Nielsen forecast in 2018 that online grocery sales would finally catch on and reach $100 billion by 2024 — or the equivalent of 3,900 traditional supermarkets. Now it’s forecast to reach the milestone this year after rising to $66 billion in 2020.

These days, new stores are not a big priority for Walmart, which likes to say that nearly 90% of the people in the U.S. live within 10 miles of a Walmart store.

Walmart is spending $14 billion, including $800 million in Lancaster, to build its supply chain capacity and automate operations. Locally, it has been hard-pressed to keep up with online demand at times.

“Our revenue grew $40 billion last year, putting us at least a year ahead of where we thought we might be,” Walmart Chief Financial Officer Brett Biggs told Wall Street investors last month. “So we need to lean in more aggressively in key markets with increased capital in fulfillment capacity, supply chain, automation and technology.”

He noted that in past years, Walmart was spending more than 50% of its capital budgets on new stores, but now it’s shifting to getting merchandise to customers more quickly.

And while DFW grocers are focused on H-E-B’s entry, there’s always Amazon to worry about.

It’s hard to keep up with Amazon’s hiring locally. It has almost doubled its number of employees in North Texas since last summer to 37,000. That’s for all of Amazon’s local business, and it won’t say how much of that staff is devoted to its grocery operations.

Locally, orders are picked by Amazon employees at Amazon Fresh fulfillment centers. Orders placed with Whole Foods Market, which Amazon has owned since 2017, are completed either by the store’s staff or Amazon employees.

Whole Foods’ DFW market share of 2% from its 14 local stores is down slightly from the prior year and hasn’t changed much since Amazon acquired the Austin-based organic grocery chain.

Amazon Fresh stores —18 of them so far — are popping up in a few markets, including Los Angeles, Chicago, Washington, D.C., and Seattle, but when asked whether Texas is in the pipeline, Amazon Fresh spokeswoman Laura Hayes said, “We don’t comment on our future store road map.”

Carol Spieckerman, president of Spieckerman Retail, based in Bentonville, Arkansas, and a longtime observer of the grocery business, said grocers in DFW do a good job of localizing their stores.

“It’s not a monolithic market. There are lots of different areas in DFW, and those retailers who push localization, different formats [and] drive-up make a big difference,” she said. “Those retailers have an advantage in a market that seems saturated.”

Stores will continue to play a big role in the grocery business, she said, which is why Amazon is building grocery stores.

“If anything is a wild card and will upset the balance, it’s Amazon,” Spieckerman said. “They’re dabbling and learning retail now, but at some point they’re going to pull the trigger, and a massive presence will be unleashed. They’re going to go big or go home.”